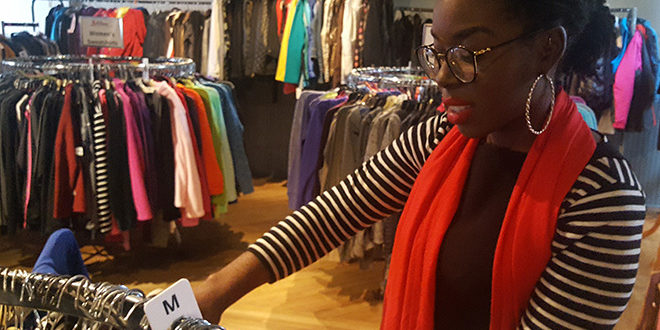 “Timi” Komonibo didn’t attend prom as a high schooler, by choice. But she “got it,” and when her parents balked over her siblings’ enthusiasm for that teen rite of passage — the glamour, the gown, the tuxedos and the expense — she remembers that she fought for them.

Ebitimi — only her father still calls her that — has turned her passion for fashion into an award-winning nonprofit. She knows that how we dress matters — and not just on prom day. The fashion “swaps” she organizes among shoppers in Syracuse funnel unclaimed outfits to others, often younger people who can’t afford them. These “leftovers” are hardly that to those who get them.

Komonibo, who is the director of recruitment and diversity at the S.I. Newhouse School of Public Communications at Syracuse University, is the founder and chief philanthropist of Style Lottery, a social enterprise advocating for sustainable fashion and using fashion as philanthropy. Sustainable fashion considers factors like sourcing and clothing reuse to help the environment.

Style Lottery pairs with different nonprofits to distribute clothing. Not long ago, Komonibo was awarded a Bustle Upstart Award, an honor recognizing young women in philanthropy, business, STEM and other fields, for her work with Style Lottery.

Komonibo’s friends, and she herself, will tell you that Style Lottery is Komonibo.

“Because I am Style Lottery, everywhere I go I get to work with really different organizations that similarly are helping people in the community,” Komonibo said.

She sees people’s fashion choices as an extension of who they are and aspire to be. Her own style is made up of versatile clothing staples with pops of color (her go-to shades being poppy red and mustard yellow). Because of her dedication to sustainable fashion, she says she can be annoying to shop with because she is so aware of her carbon footprint. She tends to get absorbed in reading labels and paying attention to how items are made.

When Komonibo walks into 3fifteen, the thrift store in Marshall Square Mall on Syracuse University’s campus, she knows exactly the type of clothing she wants. Flitting from rack to rack, Komonibo began a recent trip looking at skirts because it was almost winter, and she loves wearing skirts with tights in the cold. She also looked at button-up shirts, sweaters and jackets, all staple pieces of her wardrobe. 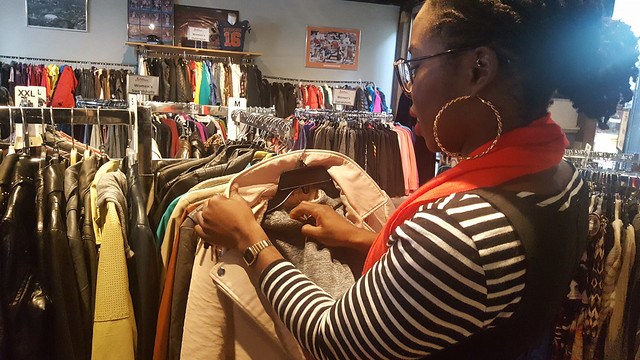 Timi Komonibo checks out a light pink moto jacket at 3fifteen. Even though she wouldn’t wear it herself, if she saw it at a swap she would set it aside because it is well made and versatile. | Taylor Pastrick, Staff Photo

Spotting two polka-dot shirts, she said she has a thing for polka dots and needs to stop buying them. She was drawn to the jackets by a light pink moto jacket, which she says she would not wear herself because pink is not her color, but if she saw it at a swap it would definitely be something she would set aside for someone because it’s versatile.

Komonibo’s younger sister, Ineye, went shopping with her recently in Williamsburg, a neighborhood in Brooklyn, where they went to a store featuring sustainable items. Ineye watched as Komonibo asked questions about certain pieces and spent a lot of time Googling for more information. Yet Komonibo left without buying.

“It’s stressful. I feel bad because she’ll pick up one pair of jeans and a dress,” Ineye said. Ineye knew her sister would do something related to fashion because Timi was always putting together stylish, sustainable looks as a teen because of the sisters’ open-closet policy. “She saves me a lot of money because she only buys staples,” Ineye said.

Komonibo was born in Nigeria. Her family moved to Houston when she was 8 years old. In between, they lived in London. She describes the experience as going from a place where everyone looks like you, to a place like London and then Houston where there is a mixture of diverse people. Now she’s in upstate New York, which she describes as a whole different end of the spectrum in terms of culture and weather. Here, she says, people are dressing for the cold weather but still showing uniqueness.

The idea for Style Lottery sprouted from Komonibo’s experience growing up with her two sisters — one older and one younger — and a brother. She realized later that a lot of people had sisters but they were not as open to sharing, or people did not have sisters and missed out on the opportunity.

“I really started Style Lottery when I was in undergrad,” Komonibo said. “I have sisters who I always shared clothes with and when I went to college I really missed that experience. So it started as a strictly kind of social thing to just get my friends together and swap clothes. But then we started realizing all the excess that we had from our swaps, that we could give them to people in the community who were in need.”

When Komonibo moved to Syracuse to study public diplomacy for her master’s degree, Style Lottery moved with her.

One of her friends from her master’s program, Jennifer Osias, who would become a Style Lottery volunteer while they were at Syracuse University, can still remember the first couple of swaps that they hosted.

The first swap was in the living room of Komonibo’s Westcott apartment in fall 2013, their first year as graduate students.

“So many people came,” Osias said, “we couldn’t fit all the clothes on the racks because we only had two. We had to put clothes on furniture. The dresses were on the couch, we used the table for shirts and the armchair for pants. A lot was left over because so many people came.”

Because of the large scale of the first Syracuse Style Lottery event, Komonibo moved her second to the Hall of Languages, which Osias can vividly remember. Osias remembers trying to get all of the clothing racks from the Newhouse School up the hill to the second floor of the Hall of Languages, which meant getting the racks with wheels up the stairs.

“It was a team effort,” Osias said. “It was definitely a success, but also a learning experience.”

She is working with Annaya English, a junior at SU and Style Lottery’s account manager at TNH Student Advertising Agency, to create what’s called a “lookbook.” A lookbook is a collection of photographs displaying a designer’s collection to show for marketing purposes.

“She’s so passionate about Style Lottery and also business-minded,” English said. “We are working on a lookbook specifically for sustainable fashion and looking at fashion narratives for her to bring to companies for meetings and leave behind.”

English said that the lookbook should be ready soon.

Besides her work with TNH, Komonibo wants to get a fashion truck to make Style Lottery mobile and do something for local teens around prom, that early defining moment that in a way was the root of her advocacy today.

“I don’t think you should be excluded if you can’t afford prom. A lot of times people don’t go because they can’t afford the dress or the hair, and if we can take care of that small detail and get you there, then no problem,” Komonibo said of an issue that she regularly encounters with her work through Style Lottery.

“I think it’s so big. I think prom is an important marker in a teenager’s life. Even if it’s something as simple as you getting your hair done and your makeup done and you’re wearing a dress and you feel fancy for a couple of hours.”