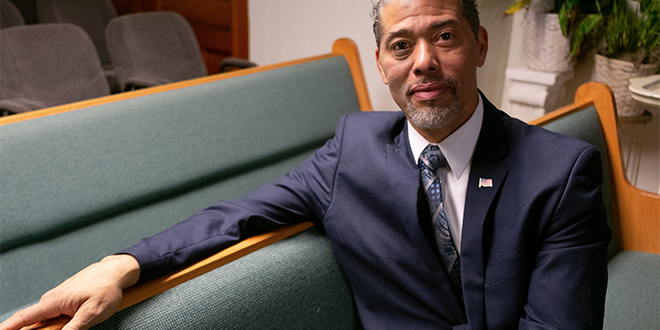 Garland Brothers Funeral Home is the oldest minority-owned business in Upstate New York. It was established in 1929, and was also one of the very few businesses that continued in Syracuse after displacement due to the initial construction of Syracuse’s highway that cuts through the city’s urban core.

It was originally located on Syracuse’s East Side for more than 30 years at 813 E. Fayette St. Then it was forced to relocate to its current location at 143 Martin Luther King Way due to eminent domain — the right of a government to seize private property for public use. In 1968, the business was one of 125 buildings taken to make room for the 409-unit Kennedy Square apartments.

Now the funeral home is managed by Charles Garland, the grandson of the original owner.

“We’re talking about generations,” Garland said. “At least three generations … this lays the foundation for any family. You’ve got that self-esteem; you’ve got that sense of security, and by moving everybody out — everyone scattered.”

Garland’s grandfather and his brother opened their first funeral home in Albany and later expanded to Syracuse in 1936. Everyone in Charles’s family used to live in the area, including his mother’s side, but by the 1960s most of the family had moved to different places. He said he has lived in Rochester then Detroit before moving back to Syracuse to help with the funeral home.

“They took our funeral home, they took our land, but it wasn’t just us,” Garland said about other businesses and homes lost when the highway was constructed.

“Back in 1968, after Martin Luther King, Jr. was assassinated, most of the cities were having riots; we had the white flight fleeing the city and flying out into the suburbs,” Garland recalled. “It took us a few years to find another spot because nobody white wanted to sell to anybody Black at that time. We had to hire somebody white that we knew, and they helped us to relocate.”

Now his biggest concern with the looming reconstruction of the aging I-81 infrastructure is the displacement that will take place for area tenants and the compensation that people might or might not receive if their land is taken away.