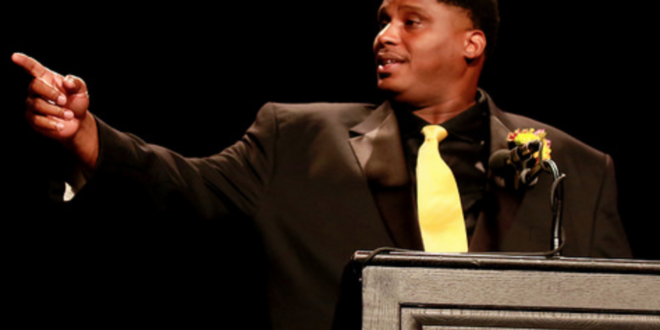 A star in Syracuse’s constellation of athletes, Ray Seals — a former defensive end in the National Football League — has won new recognition for his on-field achievements by being inducted into the Greater Syracuse Sports Hall of Fame in October.

“I’ll never forget when we were young,” said Seals, 51, as he reminisced during an interview. “I lived next to Pioneer Homes. But we would all go up on the East Side and play this massive football game. You know you couldn’t do that now.”

Each year, the Greater Syracuse Sports Hall of Fame inducts eight to nine athletes. Each athlete must have a direct connection to Syracuse. 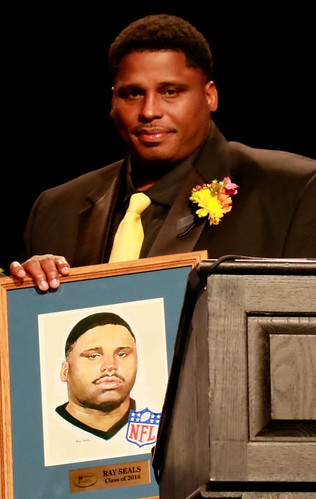 Ray Seals was inducted on Oct. 17 at the Oncenter. | Photo Provided

President Joe Russo said that for someone to be inducted, he or she must be recommended for athletic prowess by an advocate from outside the city, presumably a more neutral party. Also, the hall does not base its decision purely on athletic ability, Russo said, but also on whether the nominee made a positive impact on Syracuse.

“Their ‘afterlife’ goes into consideration,” Russo said. “After their sporting career, have they done anything for the community?”

He offered an example. “Say, were an athlete to go to college, complete studies in a reasonable time, then came back to Syracuse after leaving professional sports, that would impress the induction committee,” Russo said. “They would qualify.”

Seals, a star player at Henninger High School, did not attend college. Instead, beginning in 1989, he played five seasons for the Tampa Bay Buccaneers.

Growing up, Seals was active in football and basketball. He also said his religious faith played a huge role in shaping his life.
“You go to Sunday school lessons and you’re trusting and you’re believing,” Seals said.

He attended Greater Holy Temple Church of Jesus Christ on Onondaga Street, with his mother. As a child, he said, he recognized that his achievements would come with the moral foundation he gained in church.

“Growing up and maintaining a belief system like no other — no matter what people say — and just moving forward in life, even when faced with adversity,” Seals said.

“I’ve always been a strong believer in achieving the goals I want to achieve. As far back as junior high school, I always believed I would be playing football somewhere for some NFL team,” he said.

“My dream was the Steelers,” he added, a dream he fulfilled six seasons into his NFL career.

Seals entered a semi-pro league when the NFL players union went on strike. After the strike ended, he contacted a few teams and ultimately landed with the Buccaneers.

“I made it,” said Seals, rejoicing about his journey to his first NFL roster.