Audience and community members gathered at Syracuse Stage after a recent performance of “Possessing Harriet” to discuss the lasting impact of slavery in America. A panel consisting of scholars Christian DuComb, John Ernest and Joan Bryant; Syracuse Stage director Tazewell Thompson and Bass himself, fielded question about the play and its interpretation of a piece of history that played out more than a century ago in our city.

In the play, playwright Kyle Bass re-imagines the real-life conversation between Harriet Powell and Elizabeth Cady Stanton in 1839, his interpretation fueled by his own lineage. “My family has a history of being enslaved,” Bass said. “I had about 200 years of built up rage I needed to work with.” 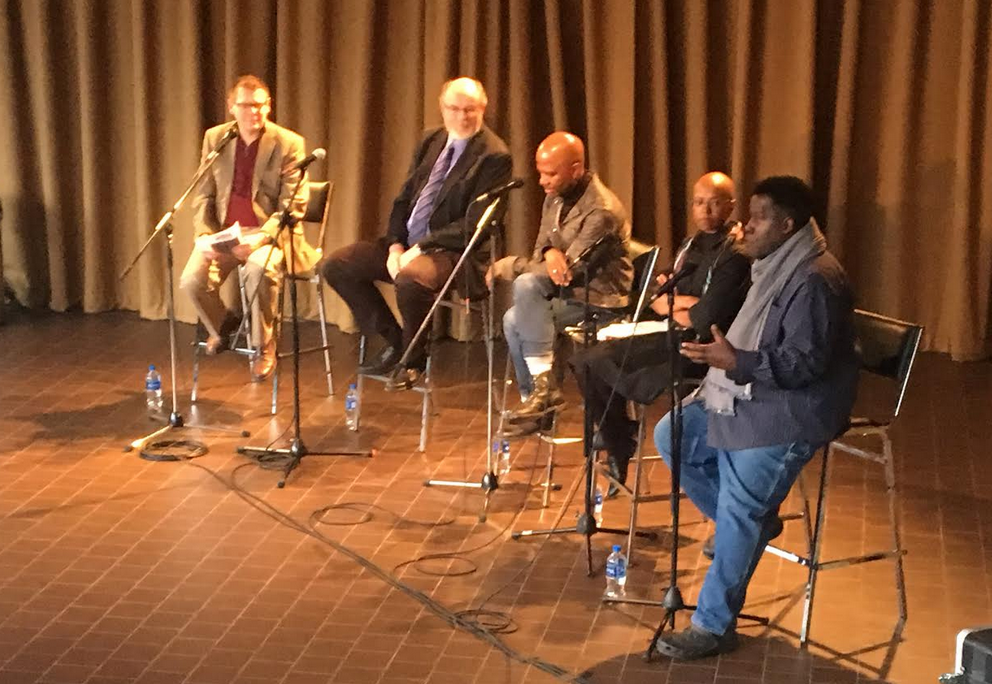 “That’s American History,” Thompson added. “We’re all in this room together because we’ve all been touched by each other. We all rubbed shoulders with each other in a dark forgotten twilight.”

Bass, who is outspoken about his family’s own well-documented history of enslavement, was originally commissioned to write the play by the Onondaga Historical Association. Harriet Powell, a half black and half white slave from the South, was brought to Syracuse on a trip in 1839, where she later escaped the grasp of her slave owners. While preparing for the dangerous trip to Canada and freedom, she was brought to the home of abolitionist Gerrit Smith and hidden in his attic, where she then encountered his cousin, Elizabeth Cady. Though history knows that Cady Stanton, who had prior not been an abolitionist herself, was significantly changed by the conversation that occurred that night. Neither woman ever revealed what exactly that conversation entailed.

This is where Bass came in. “I was given the facts, but I’m not a historian. I wasn’t trying to recreate perfect historical figures. I was trying to write a play I wanted to see.”

The imagining of what that fateful conversation could have been allowed Bass to use the drama of the theater to discover something interesting and timely about an unknown piece of history.

“I like that there were no bad black people and good white people and vice versa” said an audience member and retired history teacher, who stood up out of the crowd. “It was more complex than that, like people are.”

“It accessed human frailty of character,” added another attendee who is the grandmother of a mixed-race child. “Sometimes we find the most disturbing stories instead of the most complex, but this is complex.”

Many audience members commented on this complexity of character, pointing out that many historical figures like Cady Stanton and Abraham Lincoln are often revered for their progressive nature while the reality of their disregard for black people is ignored. “Abe Lincoln was called the great emancipator. He has almost as many books written about him as Jesus,” Thompson said. “Yet he never came to accept African-Americans as equal human beings in his lifetime.”

One young woman, likely college-aged and one of the first to ask a question, asked Bass directly about this historical phenomena, saying “Cady Stanton, history shows, was a racist. She wasn’t a white person or abolitionist who loved or respected African-Americans. So why did you choose to tell a story about her instead of someone in history who did?”

“Because,” Bass said, “if she was that advanced to begin with, I wouldn’t have a story.”

Bryant responded with her own perspective on the realities of the people we perceive as revolutionary to human rights in history saying “white abolitionists were often committed to principal but struggled to understand black humanity in the day-to-day.”

This inspired audience members to begin a discussion on the modern state of racism that is de-facto and sometimes harder for white people to recognize and condemn. One individual pointed out that the racism many characters in the show displayed was subtle enough that white audience members couldn’t dismiss it as outright egregious. Instead they had to recognize that it might be similar to their own.

“We talk about the heroism of people standing up today,” said another. “But it really doesn’t compare to the past. Holding ourselves to the past standard of what people were willing to do to defend the humanity of others might do us some good now.” Another audience member also suggested visiting the National Abolitionist Hall of Fame nearby to begin to learning about the complexities of the movement after seeing the show.

“The abolitionist story posses the slave narrative,” said Bryant, expanding on this encouragement to learn more. “[For example] many people think slaves didn’t have families, but they actually had very powerful family bonds. That often was what kept them where they were if nothing else.”

As the conversation wore down, Bass reminded the audience that he set out to write a play not for the audience, but for himself. “I wrote a play I want to see,” he said. “And if it makes you all sitting there go ‘OK. I get this,’ then I’ve done my job.”

“It’s a sort of catharsis,” Thompson said. “This may not be directly about you, but it should still make you ache. It should make you remember some deep dark root from your own culture.”