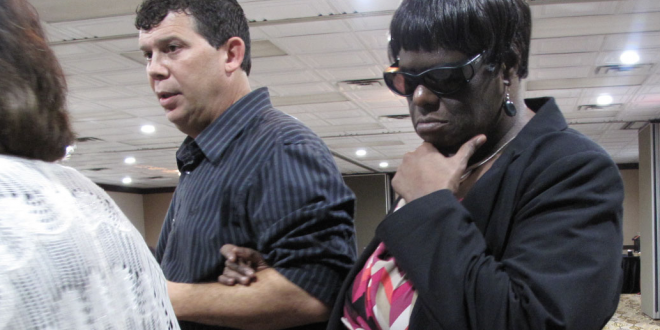 For more than six years, Donna Reese has been a symbol for Aurora, a nonprofit that has spent more than 90 years serving individuals with vision or hearing loss.

Reese lost her eyesight from glaucoma. It’s a disease with no early symptoms that damages the eye’s optic nerve and can result in vision loss and blindness, according to the National Eye Institute. After her diagnosis, Reese felt isolated. She was frustrated and had a futile mood.

She turned to Aurora of Central New York Inc. to receive help navigating her new reality. With Aurora’s support, she retrained and regained her self-confidence. She also started an internship and then a job at Aurora, working there since Nov. 18, 2009 to help others find meaningful and productive employment, too.

“You don’t have to isolate yourself,” is what Reese tells those she encounters in her work as a 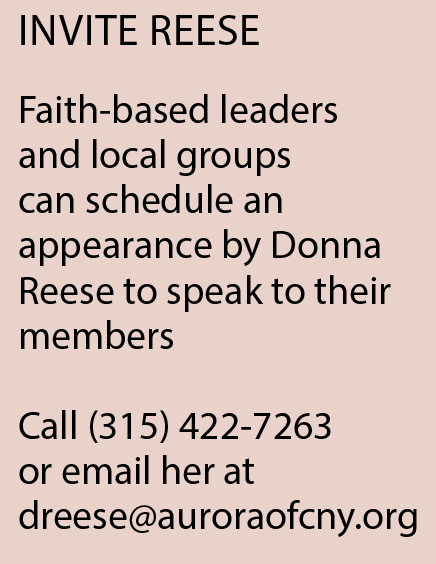 n outreach specialist. “Whether you want to update your skills by going back to school or earn a job, Aurora is here to help you.”

Reese recently launched an initiative to expand Aurora’s outreach to the faith-based community to tell more people they don’t have to live in isolation. She has spoken to the congregation at The People’s A.M.E. Zion Church and hopes to receive more invitations from local faith leaders in the coming year.

Loretha Baums, a congregant of the church, heard about Aurora’s visit and wanted to bring her niece, Wendy Austin, who has been blind for the past 10 years and currently utilizes no services.

“I am familiar with Aurora, but my niece is not. I wanted her to hear what they could offer,” Baums said. “Donna shared her own story and let others know that once you become blind, all is not lost.” 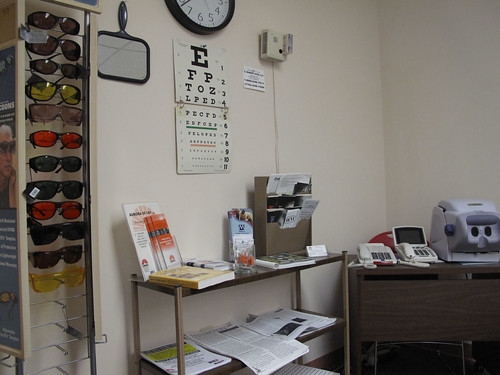 The Aurora office, located at 518 James St., is equipped to perform eye checks for its clients.

In Onondaga County, the employment rate for working-age people with disabilities is 35.1 percent, compared to 76.5 percent for people without disabilities, according to a 2012 report by New York Makes Work Pay based on data from the 2008-2010 American Community Survey.

“Having to lose a job I had for 20 years and going on disability retirement was such a challenge,” Reese recalled about her role as a mental health therapy aide at Hutchings Psychiatric Center. “Thank goodness for Aurora. With limited vision ability, I had to retrain.”

Reese’s vision problems began when she developed a corneal infection and later a corneal ulcer in 2007. Then after complications with her seventh eye surgery — performed last February — Reese lost all her vision, becoming legally blind.

“But once again, Aurora was in my corner and helped me learn a new computer program that is totally dependent on keyboard commands,” Reese said. “Also, I have an orientation mobility specialist that reoriented me on using my cane, which I am now solely dependent on.”

To be successful and productive at work, Reese was trained by Aurora on computer software created specifically for the blind. The center works with each client to find adaptive technology to meet his or her unique needs. 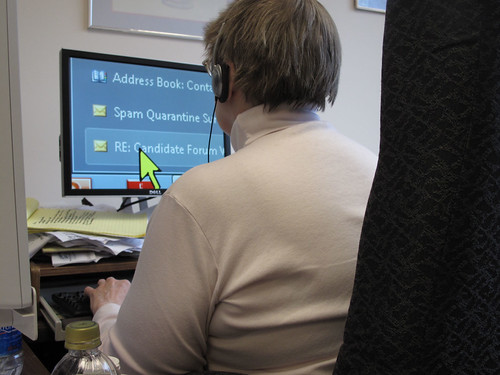 Starr Guckert has been with Aurora for 32 years and is known as the ADA specialist. She works at her office computer with the assistance of magnification software.

Reese previously could make out shapes and shadows and was able to navigate on a computer with magnification using a large mouse. Now that she is legally blind, however, she uses the software program JAWS, which stands for Job Access With Speech. It is a screen reader, developed for computer users whose vision loss prevents them from seeing screen content or navigating with a mouse. Equipment for the blind, such as JAWS, is funded by the New York State Commission for the Blind at no cost to employers or consumers.

Joel Brennan, director of supportive employment, works in partnership with the commission to assist in job placement. Services from Aurora are free but require a referral from the commission and documentation of visual impairment from a doctor. After being referred, a client meets with Brennan, who conducts an in-person job assessment. Then once a job is obtained, the agency continues to support clients.

Brennan explained that Aurora conducts a six-day assessment and a 90-day assessment.
“During the six-day, we follow them at work and meet with their supervisor to ensure they have the tools they need to be successful,” he said.

At that point, Brennan can install needed software or hardware such as a computer screen reader or LED magnifier, meeting the standards for accessible accommodations under the Americans with Disabilities Act. Then, over 90 days, Brennan meets with the new employee multiple times to ensure job success.

“It’s not about getting special treatment,” Reese said. “It’s about having equal access and equal opportunity to employment.”

Similar job skills services are offered for the deaf. 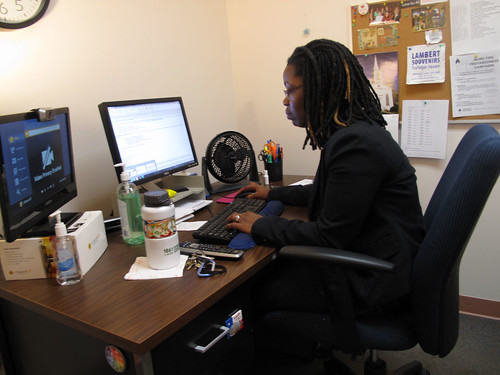 Akemee Capers works with the deaf or people with hearing loss as an employment specialist. She has been with the agency for five years.

Akemee Capers, an employment specialist working with the deaf, helps her clients with their resumes and job searches. She says a challenge she faces is to end self-perpetuating stereotypes.

Capers says clients tell her, “I can’t work because I’m deaf and people will look down on me.” Capers tries to change that thinking. She says success comes when clients she has helped gain confidence and stop making excuses. She tells them, “You can work, and I can support you.”

A major challenge for Aurora clients is accepting a gap in their job history. When vision or hearing loss suddenly hits, clients must go through an adjustment period to accept and then relearn new ways to execute even simple day-to-day tasks, staff members say. And this must happen before clients even think about re-entering the workforce.

“We run up against a lot of misconceptions from employers that these are people who cannot fulfill their job duties or that they are going to be an accident risk,” said Dave DeFrancis, director of public relations and outreach operations. “We work to alleviate these misconceptions. This is why it’s great to have Donna, who can come in and show how effective she is.”

Reese agrees. “If I can inspire other people that are trying to figure it out every day, then I’ve accomplished something. Every time I interact with someone, I’m paying forward with what Aurora has given to me.”