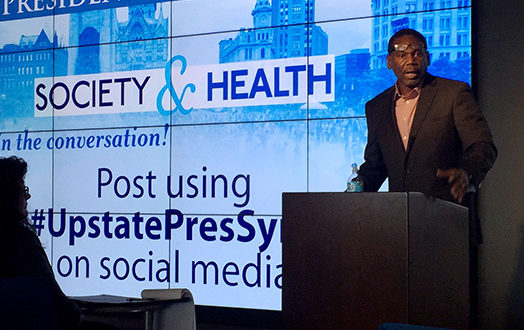 Larry Williams, director of Syracuse Save Our Youth, speaks during the Community Violence Panel.

A number of events have been held this spring to unite and develop action plans for citywide improvement.

Upstate Medical University held its Presidential Symposium at the end of March to examine key issues, including the local heroin/opioid epidemic, community violence and refugee health. The session on violence featured a panel of medical professionals, along with Larry Williams, who runs Syracuse Save Our Youth (SOY), a group that works with at-risk teens.

Public Health and Preventive Medicine Ph.D student Margaret Formica spoke about how research on firearms violence is not a priority in the medical field, despite the American Medical Association’s labeling of gun violence as a “Critical Public Health Issue” in 2016. 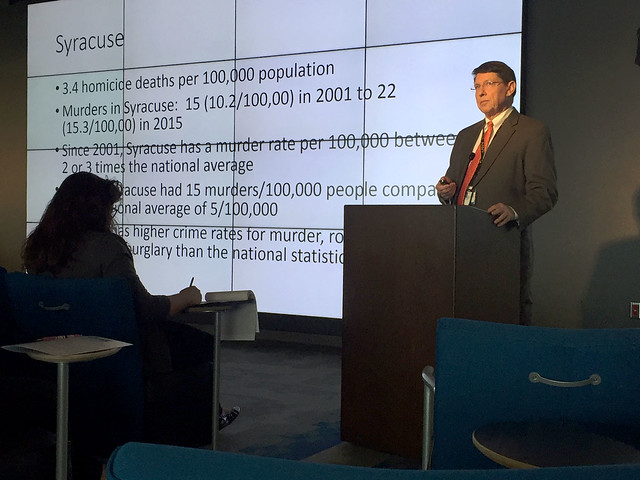 “New York City centers see about a third of the penetrating trauma that we see here,” he told the crowd of social service professionals, health providers and other community guests.

Marx also shared that his oldest daughter teaches in the city. She once told him that her fourth-graders asked her for strategies to avoid gang members who were trying to recruit them. Williams, who spoke from the community perspective, reiterated this fact saying: “We have been seeing younger and younger folks getting involved, as we would say ‘coming off the porch.’”

He says kids are not born bad, but the cycle of violence appears to be attached to what side of town a person comes from. “No one is born with a gun in their hand,” he said. “Our community is the gateway to guns, depending on your ZIP code.”

Another initiative that launched in April, Uplift Syracuse (US), strives to raise the city’s consciousness through a series of discussions and outreach efforts. One session in April brought husband-wife duo Timothy “Noble” Jennings-Bey and Najah Salaam Jennings-Bey to speak about their individual research on the impact neighborhood violence has on students.

Trauma mapping based on gun-shot data from 2009 to 2015 provided by the Syracuse Police Department showed the pair that gun-shot clusters also overlap with the locations of city schools.

“Our youth live within the midst of all this. Can you imagine being reared in this environment with no interventions?” Jennings-Bey asked the audience.

Both noted that trauma results because of the prevalence of violence and because limited outlets exist for students to address traumatic experiences. Jennings-Bey said that one homicide affects six people in the immediate household and then more from there. “So that grief spirals out.”

Salaam Jennings-Bey added that 90 percent of urban youth experience a violent act in their lifetime. The current dynamic of violence, Jennings-Bey believes, is due to one specific cause. “I’m from the B.C. generation,” he said. After a pause, he explained: “before crack.”

“Crack created a new psychology, pushing everything to the margins,” he said. “We’re now at four generations of trauma here in Syracuse.” 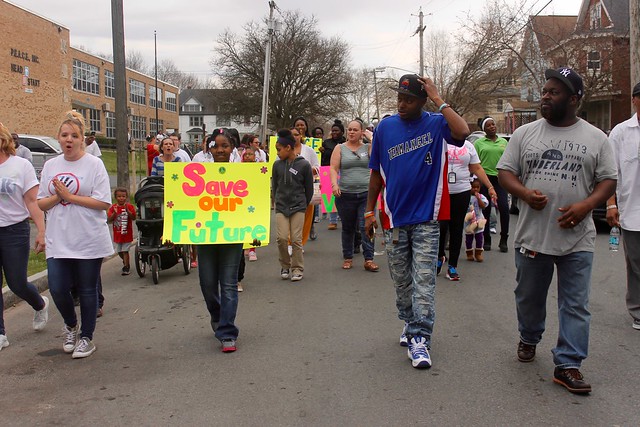 Timothy “Noble” Jennings-Bey leads students and teachers with the Head Start Merrick School last year during the center’s march to protest violence in the South Side neighborhood. | File Photo

To change this dynamic, both said the community must step up. “Strategies, to start, are to look to those organizations that have a track record in the community,” said Salaam Jennings-Bey, “and work to support them.”

Ocesa Keaton was introduced as the new director. “I hope to help all of us make a difference,” she told the crowd, showing sincere motivation to be a part of the effort.

Attendees were next divided into 11 groups and spent an hour each addressing a different issue — such as violence, housing, the poverty rate, low grades and others. Groups first identified why the problem exists, next brainstormed partners that could unite, developed ideas and strategies and lastly shared one off-the-wall idea that might just be crazy enough to work.

The task force combined all the ideas into a report filed May 1 to be considered for a $1.4 million state grant. Because need is dire, the task force wants to focus funds first on strategies that could be implemented soon. “We have vines of services, and we expect people to come and swing from them,” said Sharon Owens, CEO of Syracuse Model Neighborhood Facility Inc., at the close of the evening. “But how do we tweak those vines to bring services together for people?”

Initiatives likes these have been great to witness in recent months, and The Stand hopes they continue to expand, attracting even more residents to be involved.

— Article and photos by Ashley Kang, The Stand director