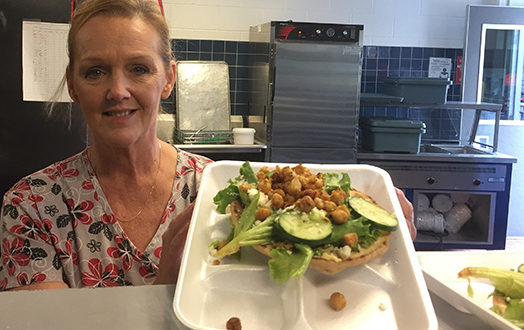 On top of a lightly browned pita rests leafy florets of lettuce, roasted chickpeas, cucumber and a generous pile of feta cheese. The veggie gyro takes up more than half of the white foam tray. While the meal is colorful, many high school students at the Institute of Technology at Syracuse Central did not find the food inviting.

Sophomores Dom Donnay and Skyler Baldwin decided not to eat at all — a choice that has become their frequent habit, even though every student receives free lunch.

Baldwin didn’t hesitate to share her thoughts on some of the school’s meals. “I have a picture of what the school tried to serve us one day,” Baldwin said. “It was like slop on a tray.”

Donnay shared this opinion: “I compare it to jail food. That’s what it looks like.”

But student concerns about school lunches are being heard.

Beginning last school year, Syracuse high school students formed a food committee with the help of community organization ACTS Youth Council. Donnay and student representatives from other Syracuse high schools presented their concerns and ideas to the school board and have been working closely over the past months with Rachel Murphy, the Syracuse City School District director of food and nutrition services.

Their goal is to improve school lunches and to diversify food options to reflect the district’s culturally diverse population. The district rolls out new international dishes one day a week to test whether or not students want the new dish on the menu in the future.

The veggie gyro? It won’t be served again.

That decision was made after food service helper Cara Fritcher exchanged thoughts with Donna Formica, ITC principal. Fritcher said that despite her encouragement, few students were willing to try the new “ethnic” lunch item.

The New York State Education Department reports that almost 20,000 students attend Syracuse city schools. Among them, 49 percent are black or African American, 23 percent are white, 13 percent are Hispanic or Latino, and 8 percent are Asian or Pacific Islander.

Diane Pratt-Heavner, director of media relations for the national School Nutrition Association, said that as nutrition legislation changes and as the nation’s population diversifies, schools must find innovative ways to meet the needs and wants of students.

Taste is not the only challenge Murphy faces when it comes to offering culturally diverse meals. 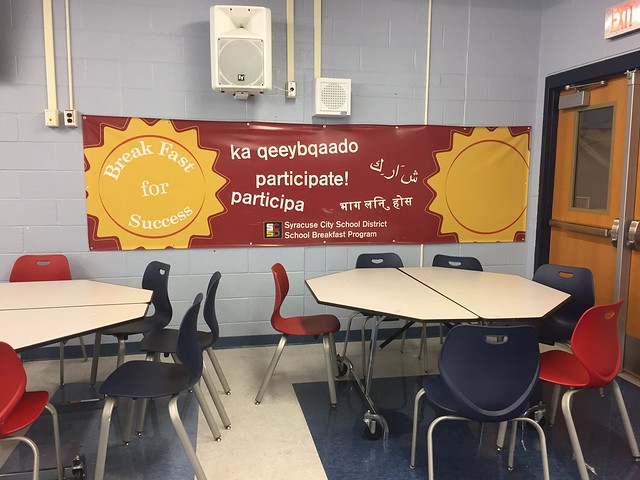 During the 2016 school year, Syracuse high school students formed a food committee to present their concerns and ideas to the school board to expand the diversity of school lunch offerings.

“Fear is absolutely there, I’m not going to lie,” the food director said. “One of the issues I’ve seen in other districts is where they’ve taken a dish and they tried to recreate it and they actually did a disservice to the folks that it represented because it was dear to their heart. I would almost say it’s disrespectful. We do not want to do that.”

To an extent, this fear has been realized. Donnay described the new Asian noodle bowl as slimy and visually unappetizing. Yet to both Donnay and Murphy, this is still a move in the right direction.

Diversity, taste and presentation are only part of Murphy’s concerns. She also deals with quality, cost and freshness of ingredients, finding the best recipes and instructing staff how to prepare new meals, providing options for different dietary restrictions and producing meals that are tasty yet healthy. 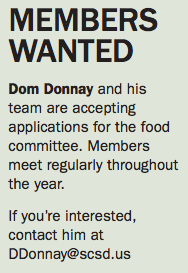 Ideally, food diversity would lead to meals with better nutritional value. Pratt-Heavner said this is a natural outcome of bringing in a greater range of foods.

“Particularly when you look at some of the Asian dishes, it’s a great way to get kids to eat more vegetables,” Pratt-Heavner said.

For the school district, food reform will be an ongoing process. With feedback from the food committee and the general student body, food services will continue to pilot new recipes until the committee and Murphy are satisfied.

While federal policy will shift under President Donald Trump’s administration — some nutritional standards will be relaxed — Murphy intends to maintain the existing regulations to promote good health and nutrition among students.

Murphy said her strategy is to first introduce some simpler “safe meals” from other cultures that students are more apt to try, then slowly introduce more complex ethnic foods.

Donnay said he hopes this practice will make a difference as students have an opportunity to naturally learn about other cultures. “We (the committee) thought having culturally diverse food will start conversations, and students will actually start talking to each other,” he said.

Diversifying food may even fight racial prejudices, Baldwin said, explaining that enjoying foods from other places connects people and allows for deeper understanding of other cultures.

While Murphy knows a lot of work lies ahead, she said she is proud of the meals the district’s kitchens have started to produce. Particularly, she loves the new quesadilla option.

“They taste unbelievable,” she said. “You can double fist them.”

— Article and photos by Lindsey McClafferty, The Stand reporter