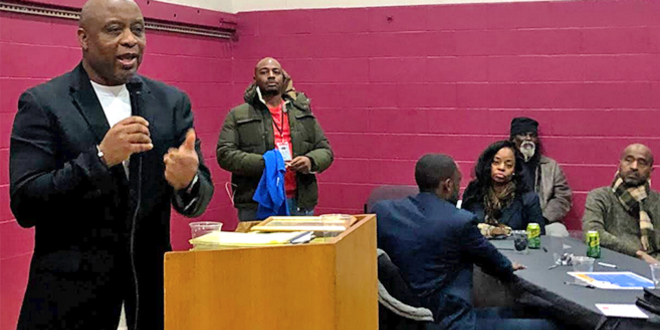 The newly hired I-81 Project organizer David Rufus speaks to South Side residents gathered at the Dunbar Center. | Shrishti Mathew, The Stand Intern

In honor of Black History Month and the memory of the 15th Ward, the New York Civil Liberties Union hosted a community dinner Feb. 20, at the Dunbar Center of Syracuse. The purpose of the event was to engage the community in conversation about the demolition of Interstate 81 and the repercussions it would have on the city, especially residents on the South Side.

“I don’t think the project is going to benefit the community and create mixed income neighborhoods as they say,” said David Rufus, the newly hired coordinator of the I-81 project for the NYCLU.

At the event, community members sat together and discussed the issue over dinner. They were prompted by a few questions placed on each table such as, what would be the benefits of the community grid? What would be the best way to ensure the safety and quality of life for residents who live near I-81?

“I’m growing increasingly concerned that the project itself has not been filtered to the community with community input,” Rufus said.

“And because the community doesn’t have an opportunity to (give input), the plan uproots them. We need to share and understand that we need to be a part of the decision-making because too often power, prestige, prejudice get involved,” he added. “That helps to destroy neighborhoods, and that’s what’s going to happen here.”

Residents discussed issues such as the health and environmental repercussions, how some of them found it difficult with the viaduct as is, but knew that it would get more difficult with its destruction. They also discussed its social impact, like gentrification and and impact on affordable housing. The present plan involves the construction of a mixed community, which residents do not have faith in.

“We get one third low income, one third middle income and one third high income. Who are they building these houses for? If it’s only one third, if you talk about the possibilities of losing 1,060 units of affordable housing?” Rufus said.

Employment is another concern. The project will require a large workforce, but according to Lanessa Chaplin, project counsel for the Central New York Chapter of the NYCLU, local hiring isn’t going to happen unless an intentional effort to give people of color and minorities employment is set.

“I think people have been very vocal, and it has to be a concerted effort to make sure people of color are employed on this job. We know from just history. There was a great racial equity study that came out last year that talked about the inequities of hiring people of color in the city. And it’s a well-known fact that people of color are not given these types of employment opportunities,” Chaplin said. “We have to demand that it is done.”

Marie Scott, a medical case worker and longtime resident of Syracuse, was concerned about her child’s education. She shared how worried she is about the continuity of education, believing the rezoning would uproot them and disrupt their education and learning curve.

“We want quality teachers, quality education and good environment that’s not disturbed by the elements outside of the school,” she said.

Charles Pierce-El, a community activist, has campaigned for an integrated community for the past 54 years. His primary concern is what would happen to the culture of the South Side community. According to him, the residents who live around I-81 are one of the few that don’t have a local culture or community center. He believes that having one would teach children about their community and also provide vocational training.

As the evening drew to a close, moderators from each table came up and shared the points that they had discussed together. Each attendee was given a postcard to write down their concerns. Next, these postcards would be mailed to the Department of Transportation.

The NYCLU plans to collect at least 5,000 postcards to be mailed. The team does regular outreach at local libraries, door-to-door canvassing and table sitting at community events.

The NYCLU is in conversation with a number of organizations like Blueprint 15, the Department of Transportation and the Syracuse Housing Authority to help come to a viable solution.

“I hope that people are able to say: ‘this is how I feel. This is what I want. This is what I would like to have; this is what concerns me,” said Rufus, explaining how the NYCLU is working to collect the “people’s voice,” amplify it and share back with top decision makers. “The goal is to let (residents) express themselves.”