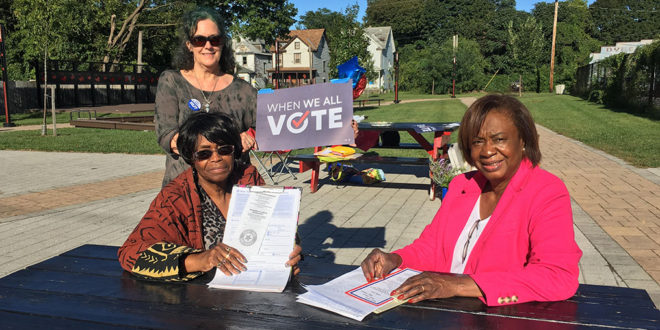 All one needs is a single, quick look at Charles Pierce-El to know he votes, and that he thinks you should, too. 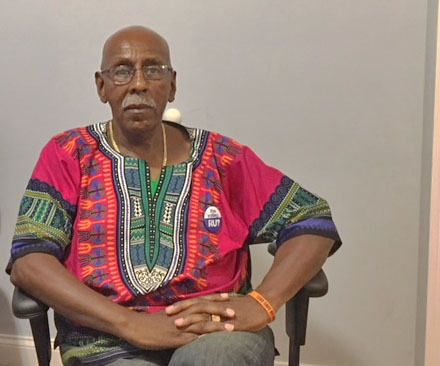 Pierce-El has recently been sporting a button, affixed to his left breast, just over his heart.

Two city districts, both on the South Side, saw just one-in-four registered voters turn-out for the 2017 city elections. Pierce-El and the other members of a new
Southside Tomorrow’s Neighborhoods Today sub-committee aim to change that.

“They think that politics doesn’t make a difference,” Pierce-El said of those who don’t vote, especially younger residents. “So I’m trying to get a movement together to show them that it does make a difference. But it only makes a difference if you do it collectively and not individually.”

Southside TNT is part of a partnership with Onondaga Votes!, the Dunbar Association and the League of Women Voters of Syracuse that recently received a $4,800 grant for grassroots get-out-the-vote efforts. The grant comes from the Gifford Foundation’s “What-if…” grant committee, which seeks to support grassroots organizations in Syracuse.

The grant will assist with voter registration, as well as education on candidates, issues and the power and mechanics of voting. It will also provide childcare, rides and meals at the Dunbar Association on Election Day, Tuesday, Nov. 6.

Pierce-El used to go around by himself, knocking on doors, encouraging people to get out and vote, he said. With a high neighborhood turnover, there were always new neighbors for him to meet.

“I’m retired, and I’m just giving back,” said Pierce-El, who also sits on The Stand’s board, among other efforts. “I’m giving back where there’s a need.”

Heather Allison Waters, the membership director for the League of Women Voters of Syracuse, shares Pierce-El’s desire to get more people registered and to see them make it to the polls.

Waters said “obstacles” can prevent some registered voters from actually exercising their right to vote. 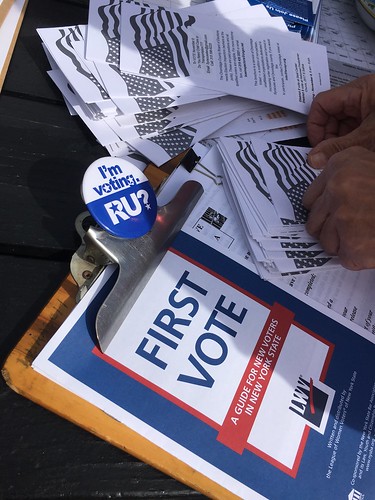 In areas with higher levels of poverty, such as the low-voter turnout districts in the city, transportation and South Side activists take to the streets to educate fellow citizens on importance of voting child supervision can be hard to find, Waters said. This new partnership wants to alleviate these types of obstacles.

“Some of the things that are barriers for people at poverty, (such as) childcare and transportation, are two key drivers,” Waters said. “We wanted to make sure that those are part of our approach.”

A sense that voting doesn’t affect change is another barrier, and one that apparently starts young. Rachielle Scrivens works with children at the South Side Communication Center, and she sometimes teaches them about politics and voting.

Scrivens sees the “our vote doesn’t matter” mindset among the kids and doesn’t quite know where it comes from. She suspects it just might not be a topic that’s broached enough in school. So she said she tries to do her part to turn ignorance into understanding.

When Scrivens arrived at the center on Primary Day in September, she told the kids that she voted. The kids asked, “why?”

“When you don’t vote,” she said, “you don’t exercise your right to have a voice in that process.”