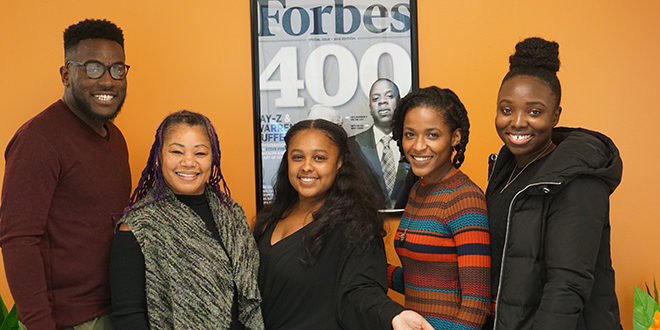 Today is National Election Day in New York State and one of the last days for residents to have their voices heard in determining who will be sitting in office come January.

This past Sunday, South Side residents attended the #TrapTheVote gathering at The Creator’s Lounge to honor those who took the time to vote early by exercising the early voting option implemented this year in New York State for the first time. Along with music and celebration, those at the event got together to discuss the importance of voting and shifting the culture around voting.

“Having conversations spark change, and that’s why I wanted to have a dialogue and conversation rather than a ‘meet the candidates panel,’” said Indaria Jones, the founder and CEO of The Creators Lounge.

Jones formed The Creators Lounge in 2016 to offer young professionals a space to work collaboratively, define their brand and network.

Along with providing these opportunities, The Creator’s Lounge gives people a place to unite and work toward their betterment—something that came up as an important means of creating change during the dialogue.

“Our ancestors were organizing by the thousands and having meetings weekly and monthly,” said Deka Dancil, president of Urban Jobs Task Force. “We don’t have the organized structure in Syracuse, and people in power know that, so they take full advantage.”

Dancil along with others present at the discussion agreed Syracuse’s African American community would greatly benefit from organizing as a group in consolidating their votes and attending public meetings and rallies. Showing that large portions of the community are invested in local issues puts pressure on officials to act, they added.

One example Jones brought up was if there are two streets in the city that need to be plowed, the street with 21 voters will be plowed before the street with one voter. “It’s a numbers game to show who thinks they matter,” she said.

But beyond the idea of being responded to first, the group also spoke about the real impact one’s vote has in local elections.

While the group generally agreed that national elections with the electoral college water-down the impact of a vote, they all stressed the power of local voting. In 2017, Mayor Ben Walsh won the race for mayor by beating Juanita Perez Williams by 3,908 votes. “That’s not that many people in a city that has 140,000 people,” Dancil said. “There were way more … people registered or unregistered who didn’t end up voting.”

And while the 2016 election was the first time in 20 years that the Black voter turnout rate decreased, the 2018 election saw historic highs in turnout, according to The Pew Research Center. This election also saw a historic number of women, LGBTQ+ individuals and people of color voted into office.

“It’s so important to vote because we need people in office that look like us, that understand us, that came from where we came from, and understand the struggle,” said Dashé Roberts, a local musician and attendee of the event.

Roberts added that if the community is unable to put who they want in office, others outside of the community will. And with important issues that directly affect Syracuse’s South Side likely to be decided by this year’s cohort of elected officials, Jones cannot stress enough the community’s need to exercise its voice in making these decisions.

“There’re issues going on like I-81, jobs coming in the tech space, funding and tax cuts, that affects us directly that we can stand-up and vote for,” Jones said. “Just show up.