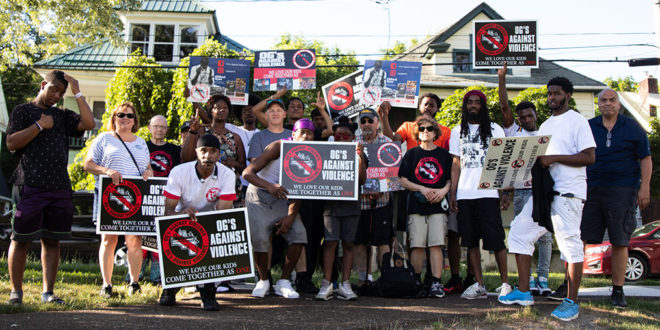 Concerned citizens gathered July 21 at McKinley Park for a walk in memory of Jamire Gillard, who was shot and killed last month. | Photo by Emily Kenny

A group of Syracuse citizens organized a peaceful walk at McKinley Park on July 21 to demand justice for Jamire Gillard, who was shot and killed July 13. Chants of “stop the violence now” and “if you know something, say something” filled the streets, as the group became bigger by the block.

The walk was attended by about 25 people of all ages and ethnicities and met at the end by Gillard’s mother and friends. The event was led by Clifford Ryan, founder of OG’s Against Gun Violence (Our Generation Against Gun Violence), who has led this group since 2015. But he’s been an advocate against violence since 1999, when his oldest son, Duriel Lamar Ryan, was shot and killed.

The gathering took place less than a week before someone was charged for the homicide.

“Our city as a whole is under a lot of pain from the gun violence,” Ryan said.

The walk was organized by a group of young men from the North Side of Syracuse, organizers who did not know Gillard personally. They said it is important for them to work toward changing the narrative to one of growth and development.

“We all lost friends (to gun violence), like six or seven, and that was just in high school,” said Blair Seals, one of the organizers. “We all grew up with this … so we have to reach out (to the community).”

Ryan was present at Gillard’s vigil, which took place Thursday, July 18, with about 80 attendees.

“Every single one of them is suffering from the impact of dealing with the loss of another friend and/or loved one shot and killed,” Ryan said.

About 20 of those people had lost 10 or more friends to gun violence.

“Here they are now, burying another friend, so that impact is very strong as far as what it does to the community,” Ryan added.

Ryan said the community is expressing stress, anger and sadness every time an incident happens.

“You have people that are afraid, and you have some that are tired of it,” he said.

Ryan clarifies by saying that gun violence survivors are blessed to be alive, but then will have to live with the trauma, the dreams and the fear.

Shannon Houck, who has a doctorate in psychology and is a professor at Syracuse University with an interest in social and political psychology, says prolonged stress, like the one caused by gun violence, can change the brain’s chemistry. This, she said, is bad for children’s development.

“It operates in response to community violence, which is a form of trauma,” Houck said in a phone interview. Stressful situations like being around gun violence affects not only mental, social and emotional health, it also affects physical health. According to research, situations like these have been related with mood disorders, depression, anxiety and other long-term illnesses.

Ryan said some youth believe they need guns to protect themselves.

“The element within the younger generation is kill or be killed,” he said, “and you have to be able to convince them that there is an alternative.”

— By Rocío Fortuny, Special to The Stand