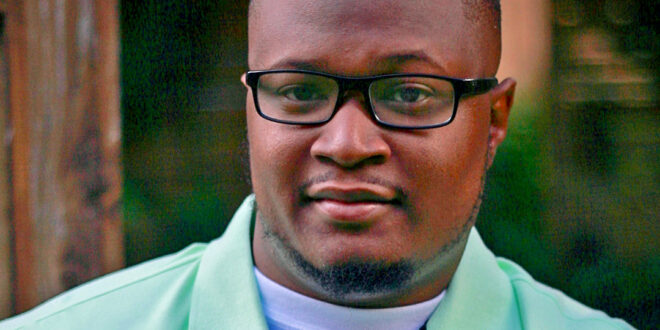 Tre'Coy Boyd started working at the Volunteer Lawyers Project in June as a legal assistant and community educator with the Eviction Defense team. | Provided Photo

The nonprofit, which specializes in providing legal aid to residents who are unable to seek paid legal services, recently hired Tre’Coy Boyd as its new legal assistant and community educator to assist tenants in Onondaga County seek housing stability.

Boyd and his family moved to Syracuse from Brooklyn when he was in first grade, establishing a home on the East Side of the city.

“I was raised in a single-parent household. I don’t know my father. (When we moved,) it was just me, my mom and my brother,” he said. “From the jump moving up here, we lived in the projects, had to figure it out and slowly progressed our way up.”

Specifically, he grew up in a housing project on East Fayette Street, something he considers pivotal to his understanding of what a safe and steady upbringing means.

“It was hard,” Boyd noted. “I had a lot of responsibilities. I was the older brother holding it down at home, watching my little brother … and making sure we were safe.”

The housing projects where Boyd spent his first few years are part of the 36.01 U.S. Census tract, which, according to a study compiled with 2010 census figures by Syracuse’s Department of Neighborhood and Business Development (NBD), is home to 256 affordable housing units.

“My mom struggled keeping the lights on and keeping food in the fridge,” he said. “We had to apply for food stamps. We had to call as many places as we could to make sure we had the resources to keep everything afloat.”

Boyd’s experience is congruent with a grueling reality faced by many in the United States who live in housing projects. According to a 2016 study published by the Urban Institute, a liberal think-tank based in the nation’s capital, the average poverty rate for census tracts that include public housing units was 33 percent.

Boyd’s perception of public social safety programs, as well as his family’s eventual rise out of a precarious situation, instilled in him a sense for giving back to the community. He started his career by working at the Syracuse City School District as a teaching assistant and a job coach.

“Once I saw that I couldn’t reach my roots in the community the way I really wanted to, I took a role at Elmcrest (Children’s Center) as a supervisor,” he said. “After that, I did some time as a case worker at Catholic Charities of Onondaga County. That was probably my deepest role in the community before (VLP).”

Boyd felt his previous efforts as an advocate did not go far enough. He wanted to offer more.

Today, Boyd’s work with VLP as a community educator helps families in need of housing stability, something he deeply connects with due to his background. A focus of his day-to-day efforts centers on helping tenants understand their rights as renters.

“I feel like I share the same interests as the people in the community. I see what it feels like to struggle and to be put out. We’ve been put out before,” he said in reference to being evicted. “(My family) knows what it is like to not have the proper information (such as) your rights as tenants.”

Additionally, Boyd also helps renters seek financial aid, especially to those who have a backlog of rent payments due to economic hardship ushered by the global COVID-19 pandemic. The worldwide financial downturn, fair housing advocates say, could bring upon an “eviction crisis” that has so far been staved off by the state’s eviction moratorium — recently extended Aug. 31 — and the Centers for Disease Control and Prevention (CDC) federal moratorium on evictions — set to expire at the end of this month.

One of Boyd’s projects is contacting tenants who have previously requested the VLP’s legal services and helping them submit the required paperwork to request financial aid from the Onondaga County Rent Relief fund. This program is a pool of funds to the tune of $29 million approved by federal legislators in order to help tenants and landlords shore up any backlogged rent that has gone unpaid due to the pandemic. As of early May, the county had received 3,600 requests since it opened up the online application process in mid April. County officials have in the past stressed that “mom and pop” landlords are the main target when sending out these aid payments.

“We shoveled through all of our cases, ‘A’ through ‘Z’, including any clients that we had in the past or have presently,” Boyd said. “We made sure we touched base with them, gave them a call and made sure they had the rental relief forms completed.”

Another form of aid that can protect tenants from potential eviction is the tenant hardship declaration form, which according to the nonprofit organization Eviction Free New York, is a favorable tool in legal disputes as it shows tenants taking a proactive step in forming a legal defense. The form notifies the landlord about financial hardships experienced during the pandemic, such as the loss of employment or reliable sources of income.

“The form is a huge piece for the tenants and the community because if they submit that form to the landlords, that’s telling the landlord: ‘Hey, this tenant has experienced some kind of financial hardship and that means they cannot be put out on the street and be homeless,’” said Boyd, adding he contacts “10 to 20 intakes per day.”

Boyd noted the VLP’s assistance extends to in-person visits to ensure tenants seek legal aid, but the evictions defense task force will also meet with renters over Zoom or over the phone.

“Whatever is necessary to help them complete these forms and be able to stay in their homes,” he stressed.

Despite the potential for a volatile evictions crisis, Boyd said he remains optimistic about the future and commends the work VLP is doing to protect tenants.

“I do see the situation getting better over time because we stepped in to make the calls to all of our previous clients and present clients,” he said. “All of our clients have their forms submitted. All of our clients are working with the landlords and letting the courts know that they’re willing to do their part, (put in the necessary) legwork and apply for the assistance to stay in their home.”

Although Boyd foresees a growing caseload that will only expand throughout the summer, he noted “there’s nothing that we can’t accomplish when we’re putting community first.”