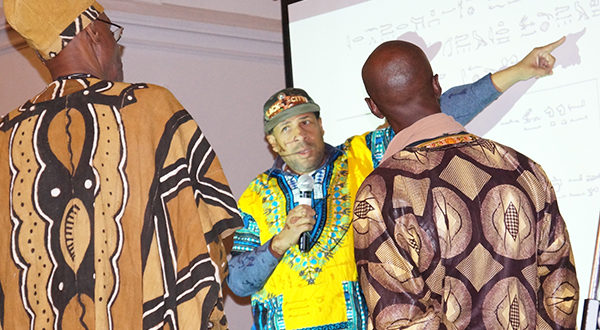 From left: Harold Wright, Reggie Mabry and Wadjety Imhotep discuss history at the conference, which stressed community support, education and integration with other cultures. | Photo Provided

Famed Ethiopian filmmaker Haile Gerima visited Syracuse in April 2003 to screen his motion picture, “Sankofa,” which he directed 10 years before. Its plot revolves around an African-American model named Mona. The initial scenes show her doing a fashion photo shoot in Ghana, where she runs into the Divine Drummer, who encourages her to return to the African roots of her ancestors.

Sankofa is a word in one of Ghana’s native languages, and it can be loosely translated as “go back where you belong.” In the movie, sankofa is a spirit with multiple manifestations. It is represented by drumming and chanting, and it is incarnated in the drummer himself. 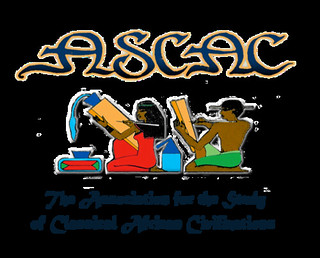 The spirit of sankofa was alive and well in Syracuse during the Eastern Region Conference of the Association for the Study of Classical African Civilizations (ASCAC), which was held Oct. 21 and 22 in the building of the former Elmwood Presbyterian Church, now occupied by Believers’ Chapel City, at 1640 South Ave.
The gathering opened with a traditional African drumming and libation, after the eight executive committee members of the eastern region paraded toward the front of the sanctuary. Some of them were dressed in African garb, such as robes and dashikis.

The event featured four plenaries, four workshops and two addresses. The idea of people of African descent reconnecting with their ancestors was present throughout these activities, and at the opening as well, where Modell Gault, president of the eastern region, said, “This libation is for our ancestors, for the ones who came before us, for the continent, for Africa.” 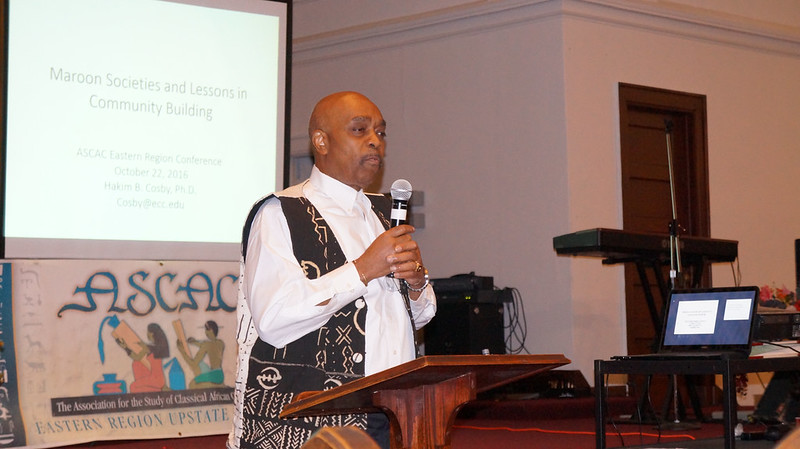 Jo Ann Peters, the region’s first vice president, added that the conference was dedicated to “those who made the way for us.” Finally, in this opening segment, a third board member, Ras Simien Anu, asked the audience to observe a moment of silence for their ancestors.

Then, both Peters and Anu described the tireless collective labor involved in bringing the forum to Syracuse for the first time. Peters recounted the numerous conference calls to make it happen. Anu said he had been working for 11 months because he “believes in the work of ASCAC and in the grand master teachers, who are great individuals who create the structures to liberate our minds.”

Another salient theme of the conference was that of the elders.

Reggie Mabry, a plenary presenter, said that this year was his 31st in ASCAC, and that during this period, he had seen many “male and female great elder warriors” in the association. Keynote speaker Hakim Cosby echoed the sentiments, quoting Dr. Asa Hilliard III as having said in 1995, “Turn off the TV and turn on the elders.” Hilliard was one of the founders of ASCAC in 1984, along with Drs. Leonard Jeffries, Yosef Ben-Jochannan, Jake Carruthers and two other prominent Pan-African scholars. The topic of the elders was followed by that of the youth.

“We cannot do anything for our youth without putting something in their minds, without giving them a vision,” Mabry said, to which Gault added, “We need young people to replenish, duplicate and reproduce ourselves.”

Crystal Austin, a workshop facilitator, addressed the attendees. “Our children are looking for an answer, if we don’t give them an answer, how do we help them grow? Their eyes see the world not through us but by us. Say what you mean; mean what you say.” 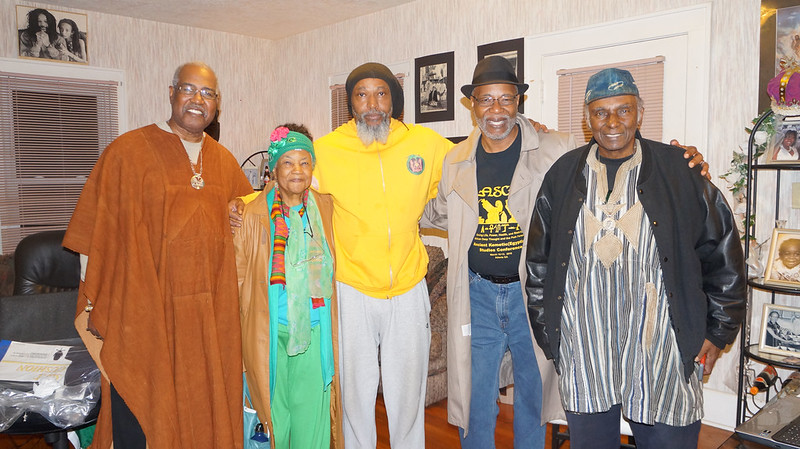 Legendary local activist Twiggy Billue intertwined the subject of the elders with that of the youth while noting the audience’s “passion for ASCAC, for the community and for one another in the intergenerational spectrum.” Mabry concurred, speaking of a common “intergenerational struggle.” But Dr. Rosalind Jeffries, another plenary presenter, offered a caveat: “Every generation has to redefine itself for itself.”

The intergenerational issue was also reflected in the concept of the family.

“Either we are a family or we are not; either we protect each other or we don’t,” Gault said. Then Mabry told a story about going to a class taught by Leonard Jeffries, one of the ASCAC founders, who asked him, “Who are you? Not what is your name, but what was your family, and what is your family doing now?”

“Any serious Africanist organization must create a Council of Ancestors, a Council of Elders, a Council of Experts and a Council of Scribes, to all of which masses would be accountable,” he said, suggesting the establishment of a hierarchical, rather than a horizontal, structure. “This was standard operating procedure in the very best periods of ancient African Kmt civilizations.”

He then posed the rhetorical question, “How do we give honor and praise to our great ancestors?” Answering, he said, “We speak and write their names, we use and honor their great works, we complete their great works.”

The notion of community was also addressed at the conference.

Cosby asked, “Why our communities are weak?” He responded, “Because of the loss of our values and because we cannot support one another.” 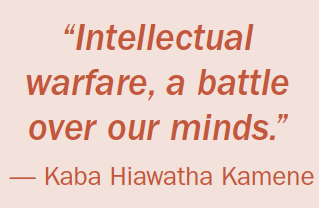 The final plenary presenter, Kaba Hiawatha Kamene, had a recommendation in this respect: “March to the nearest black-owned store and put your money down. Try to do it once a month.” He suggested this approach was a more effective use of time and other resources than going to a demonstration such as the Million Man March.

The importance of forming study groups to develop a sense of community was also stressed throughout the conference. Cosby, who said ASCAC was founded as an organization of study groups, cited Hilliard’s “The Maroon Within Us: Selected Essays on African American Community Socialization,” published in 1995, as having a list of small study groups. Among them: the Bennu Study Group in Atlanta, the Kemetic Institute in Chicago, the First World Alliance in New York, and Amenta in Los Angeles.

“Study groups are a start,” Cosby said. Modell, who also goes by the adopted African name of Nana Kobina Aduku I, said, “We need to close ranks. In order to rebuild the African community, we need tobuild the family. … Nobody is going to save us but us. We encourage all to join a study group to learn about ourselves.” Kamene stressed the importance of investing in study, mentioning an “intellectual warfare, a battle over our minds.” He described the battle. “If people want to oppress you, they may take three things from you: your history, language and psychological value.”

Kamene suggested adopting the motto: “If it is to be, it is up to me,” adding, “There is nothing anyone can do for us; we have to do it ourselves.” He then used an analogy of a rock in a slingshot: “The further back we go into our past, the further we are going to be propelled into our future.” 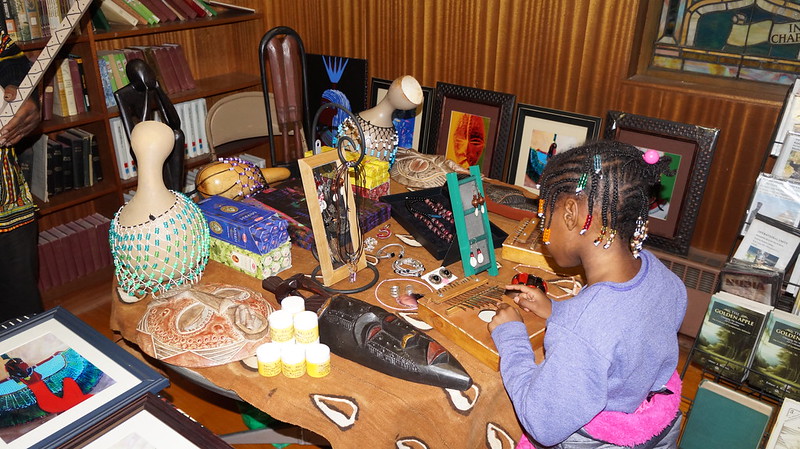 A girl at the conference views traditional African art. Speakers said remembering the past is vital to building and shaping the future. | Photo Provided

Leonard Jeffries emphasized the concepts of Africanness and Africanization. He understood Africanization as the process of “getting into our Africanness” — a process in which the “soul comes out of our biogenetics” and realizes itself by “establishing a new Africa.” He added: “I believe in integration, in Africans integrating with other Africans. Then we can think of integrating with other cultures.”

Rosalind Jeffries told the attendees, “We have to remember the past so that we can mold and shape the future. Reshape the future in view of the errors of the past. You can’t do it without learning from the mistakes you made.” Jeffries then recommended the book, “The Integration Trap: The Generation Gap,” published in 2004, by Oba T’Shaka, who also wrote “The Political Legacy of Malcolm X” in 1983.