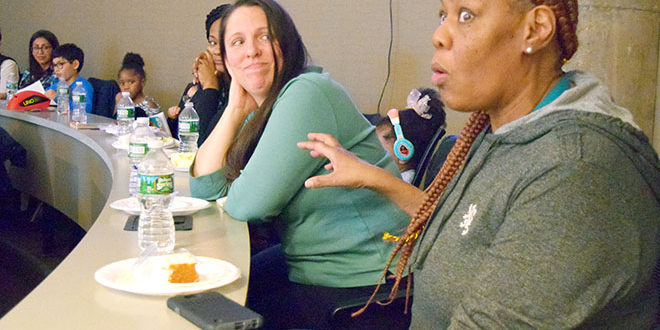 Audrey Samantha Moore gives her perspective about the city of Syracuse while discussing the history of the community during the Feb. 27 Soul to Soul: Community Dialogue on I-81 Impact.

CNY Roots hosted its third meeting for the Soul to Soul: I-81 Impact community dialogue series Feb. 27 at the Tech Garden. Co-founder of CNY Roots Juhanna Rogers invited broadcast journalist Jennifer Sanders to engage community members with a cultural connective point by talking about the history of the community.

Sanders shared what the community looked like before I-81, which she had learned more about after completing a documentary on the 15th Ward, the neighborhood removed to make way for I-81 and Upstate Medical University.

“I was semi-aware of the history of the 15th Ward,” she said, noting what surprised her the most in her research was the the lack of voice residents had in the decision of urban renewal and how timely the issue is now. “We have voices, we just have to let them be heard. So, really becoming engaged in the process and letting people know that we’re here so history doesn’t repeat itself.”

She explained to the 30 community members in attendance that the 15th Ward was a flourishing community with businesses and close-knit relationships.

One audience member shared how she remembers Syracuse as she was growing up but because of I-81 construction, she’s watched it decline.

“I’ve been here a long time and I’ve seen the city at its best,” Audrey Samantha Moore said. “Our city has been going down — tumbling and tumbling — and now they want to tear down this highway …. everybody wants to jump on and save the city of Syracuse. I think it’s not too late, but it should’ve been trying to be saved long before it got to this point.”

The conversation shifted from the 15th Ward to how its conversion may parallel what is happening on the South Side. Director of Central New York Civil Liberties Union Yusuf Abdul-Qadir explained how the replacement will impact the health of those living along the viaduct and what the environmental effects will be.

“What we’re trying to do is center the voices of those who are directly impacted,” he said. “What currently isn’t happening is a plan to ensure collaboration between the respective agencies to ensure that the communities who live along the viaduct are centered in whatever replaces the viaduct. The conversation is reduced to commute times and dollars; that’s important and that matters, but it shouldn’t be the center of the discussion.”

Project I-81 Counsel Lanessa Chaplin explained to the audience that the state is currently in the Draft Environmental Impact Statement process. Once released, the community will then have 45 days to comment. She said even though the report is not yet out, she is collecting comments from community members and pre-drafting these to send to the Department of Transportation.

Chaplin said this and other meetings have been organized to help mobilize residents, “to educate them on what’s going and what the issue is.”

Wanting to build relationships, Todd Reid from the Salina First Project said he came to understand the South Side residents’ plight.

“The big takeaway from the night was that there was greatness on the South Side of Syracuse,” he said.

Reid said he would like to see a community grid and want people from the South Side to have a part in the I-81 discussion.

Over the past meetings, many community members have raised questions such as what the I-81 project is, what does it mean for Pioneer Homes and what ways can they get involved.

“I think those are three very important questions,” Rogers said. “Some of the folks that have been here have been individuals who grew up here, are now professionals or people that have transplanted from here and have vested interests in seeing this community grow and like myself have made it home. We talked about ways to get involved, the next steps, and how we create a voice around this project in way that we haven’t up to the present.”

The last meeting for the series will be held from 5:30 to 7 p.m. Wednesday, March 13, at the Gifford Foundation, 126 N. Salina St. Rogers said this meeting will be a call to action with an in-depth discussion on how galvanizing and organizing will help bring future leaders and change makers.