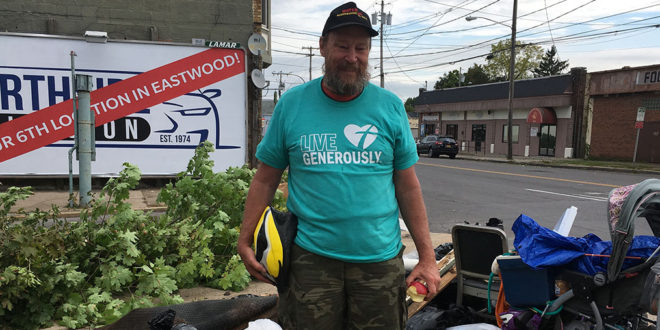 Ted Bauer, a South Side resident, volunteered along with a couple dozen others during the Oct. 6 Elmwood Business District cleanup in memory of Jim Gifford. | Provided Photo

Jim Gifford used to stand “like a monument,” frequently present on the corner of Elmwood and South avenues, Sean Kirst said. His house was the second on the right up the South Avenue hill from that intersection. Kirst didn’t really know Gifford then; he just recognized him.

Then, Gifford wasn’t at the corner anymore, victim of a murder early one morning. It happened in 2013, right by the intersection where he so often stood, just after he bought his breakfast inside the old 7-Eleven at the corner of Valley Drive and South Avenue.

“What I heard from everybody is he was just a helping person,” said Bob Dougherty, a former Common Council member. “If there was something that needed to be done, he was the kind of person you could depend on to pitch in.”

That 7-Eleven is closed and covered with wooden boards now. But one Saturday in October more than 20 people gathered for the fifth-annual commemoration of Gifford’s life. A year after the murder, Kirst organized a cleanup of the streets in and around Gifford’s intersection. The first year, Kirst wrote that more than 100 people showed up. While the number has declined in the ensuing years, the memory of Gifford and his commitment to his community has not.

“You’ve got a guy like that who sort of epitomizes the idea of life in the city,” Kirst said, “and we ought to do something to remember him.” 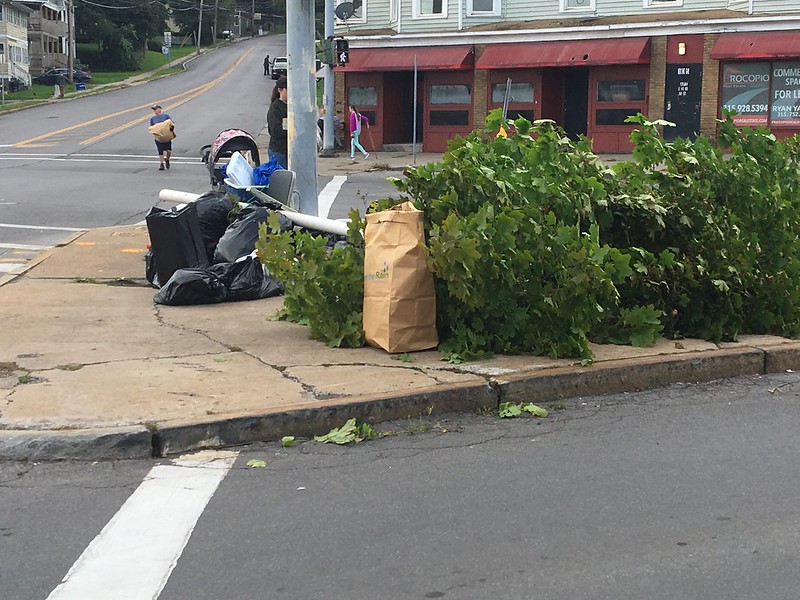 Cleanup volunteers scoured the business district, piling garbage on the island by the intersection of Valley Drive and South Avenue to honor Jim Gifford’s memory on the fifth anniversary of his death. Gifford, a longtime South Side resident, was attacked in 2013 outside the former 7-Eleven and later died from his injuries. | Billy Heyen, Staff Photographer

Kirst, a longtime Post-Standard columnist who now writes for The Buffalo News, wrote multiple times about Gifford’s murder. A teen, Romeo Williams, jumped the 70-year-old Gifford in the 7-Eleven’s parking lot and punched him before returning to kick him while he lay helpless on the ground. It’s at that very intersection that people gathered on Oct. 6 to remember.

On Saturday morning, Dougherty, one of the event’s organizers, was parked in the old 7-Eleven’s parking lot by 8:15 a.m. His navy-blue Pontiac Vibe had its trunk open, ready to provide supplies to anyone who showed up to help clean. There were black garbage bags and wooden pickers, akin to large tongs, to grab garbage off the ground.

One of the first arrivals to clean was Pat Hageman. It was her first year at the memorial, although she has spent time volunteering with similar cleanup projects in Syracuse. Hageman had reached out to Dougherty, because she felt finding a way to help was important.

“You try and do some civic duty,” Hageman said. “We all owe it to our city.”

By 9 a.m., volunteers were two blocks down the street heading in multiple directions, stretching to Bertram Place off Valley Drive. The sun started to come out after the day had begun underneath gray clouds.

One group of volunteers looked different from many of the adults out cleaning up the corners. Lydia Montgomery brought her two sons, a second and a fifth grader, with her to help. In her mind, there was no grander plan: The boys were being loud at 7 a.m., and she figured it was a good idea. Montgomery had attended high school at Corcoran, right down the street, and so cleaning up this particular area meant something more to her.

Kirst’s adult son was also one of the volunteers cleaning, something Kirst said he was proud of. In Montgomery’s two young boys, Kirst saw hope.

“You hope there’s something planted there, something ingrained, on a kind of genetic level,” Kirst said. “That they’ll realize this is part of their community, that there’s no reason to fear coming here, that there’s energy here and maybe someday they’re the ones who come down here and open a business or teach.” 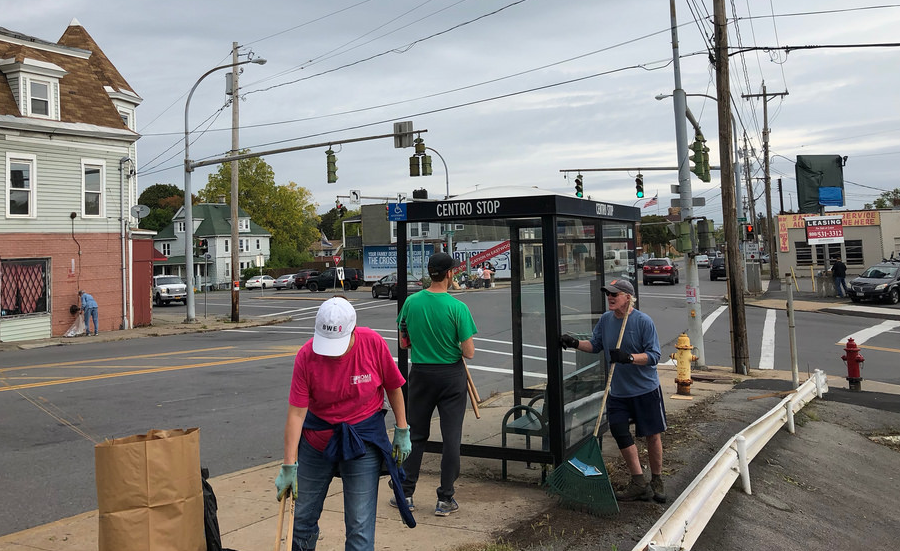 Cleanup volunteers at the intersection of Valley Drive and South Avenue. | Provided Photo

At one point, a woman stopped at a red light at the intersection and rolled down her window. Spotting Kirst, she waved and yelled, “Thank you, we really appreciate you.” Kirst yelled back, “Take care, thank you.”

As the garbage was stuffed away, bags were left on the concrete island at one corner of the intersection. More than garbage ended up there, too. In a small, five-foot-wide alley just north of the intersection on South Avenue, lots of weeds and ivy had built up. Dougherty’s brother, Bill, broke out a tall scythe to cut down some of the tree-like growths in the alley.

Kirst said remembering Gifford was important. He also wanted to remember what this part of town was like before businesses started to close. There was a post office and a department store, an area Kirst said was “thriving.” When he spoke, there was a level of nostalgia in Kirst’s voice, but also a belief that keeping the neighborhood a little cleaner could go a long way.

“It’s ridiculous for people to feel like they can’t come here,” Kirst said. “You go to a place, you get your hands dirty, you feel invested in it.”

And as Kirst crossed South Avenue, having cleaned up one corner and heading for another, he paused to look at the cars in the old 7-Eleven’s parking lot. He glanced at the people spread around the intersection early on a Saturday morning, helping pick up garbage. He felt the cleanup represented something bigger than a once-a-year event.