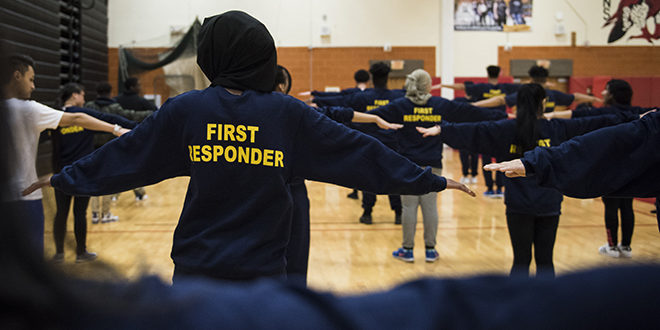 If you had to serve, would your perspective on policing change?

Make police service compulsory for every American. Don’t study it. Don’t overthink it. Just take the plunge. Will it magically fix every cop-related conflict? Of course not. But in one giant leap of civic spirit, we’ll vault past the division between police and public by simply eliminating it.

No more us versus them.

No more stark distinction between civil servant and civilian.

No more guardian class ever-more disconnected from those it’s entrusted to serve and protect.

Just as many nations have done with military service — Israel, South Korea, Sweden and others — make police service mandatory.

Break down the wall.

“The horrors we’ve witnessed perpetrated by police officers around the country make it challenging  for the public to understand that a lot of cops do good work,” says a playwright friend of mine, Donna Stuccio, who was a cop for 10 years and now works as a criminal justice instructor. “There’s a misunderstanding that works both ways.”

Confession: Donna aside, I’ve never had a great love of cops, at least not when they’re on duty. A major exception, of course, is if I’m having an emergency. Then I’m all in on Blue, which makes me a hypocrite along with millions of others. It’s not so much that I’m anti-cop as I’m un-cop. According to a 2016 survey by “Police” magazine, 84 percent of the officers who answered the publication’s survey stated that they planned to vote for Donald Trump. Eighty-four percent! By contrast, after Trump was elected, I came down with a big case of Post-Election Anxiety Syndrome and spent the next six weeks in the basement clawing my face.

Which is precisely why America’s beleaguered cop shops need people like me. Liberals. Democrats. Journalists. Playwrights. Snowflakes. Frankly, a lot of us self-styled anti-authoritarian types could benefit from having to wrestle a violent, urine-soaked drug addict into the back of a cruiser. On the flip side, as evidenced by the past few weeks, there’s too much sociopath and not enough social worker in many police departments. A police force inclined to aid an unconscious 75-year-old protester bleeding from his ear — and perhaps not knock him to the pavement in the first place —won’t compromise public safety. It will do the opposite.

The cynic in me says we’ll never pull this off. A country that can’t even unite around wearing masks in a pandemic will never muster the self-sacrifice required for compulsory service. We’re too lazy and selfish, right?

But as the past few weeks have shown, things can change in a flash.

Remember the case at Yale a few years ago when a White student called the campus cops on a Black woman napping in the common room of her dorm. The Black woman, Lolade Siyonbola, had every right to be there — she lived in the dorm too. The university launched an investigation, calling in Lorenzo Boyd, a Black, former Boston cop and now director of the Center for Advanced Policing at New Haven University, to handle the probe. Boyd soon surmised that Yale police had done nothing wrong. In a sense, they, too, were victims because they had been “weaponized” by the White caller, whom the officers reprimanded.

The two-hour discussion turned into a four-hour exchange. A free lunch was brought in. Phone numbers and business cards were exchanged afterwards. Perceived adversaries became partners — in four hours.

But what if we didn’t need a bridge because we were all on the same side?

What if we never had to speak of diversifying police departments because diversity — in all its myriad nuances — was implicit?

“Part of this is authoritarianism,” Boyd said. “It’s dominance. ‘You have to do as I say.’”

In his law enforcement classes, Boyd stresses empathy and compassion — “understanding the plight of people…I’m trying to build a better person and usher them into the profession of policing.”

Karen Loftin, an activist with deep roots to the South Side, cautions that compulsory police service won’t change the nature of how police work is done in this country. Her view is that police respond to calls from White neighborhoods with a protect and serve mindset. When the call comes from a Black neighborhood, it’s all about control and enforcement.

“No matter what kind of policing you have, the African-American community suffers more than others,” she said. She believes structural bias needs to be eliminated, including changing the Constitution to hold states more accountable for how law enforcement is conducted.

Nice try, Karen. You might be correct, but you’re not getting out of this that easily.

“You sound like someone who should be a cop,” I told her.

She paused, as if searching for a counter-argument. But what argument could there be?

“I see your point,” she acknowledged.