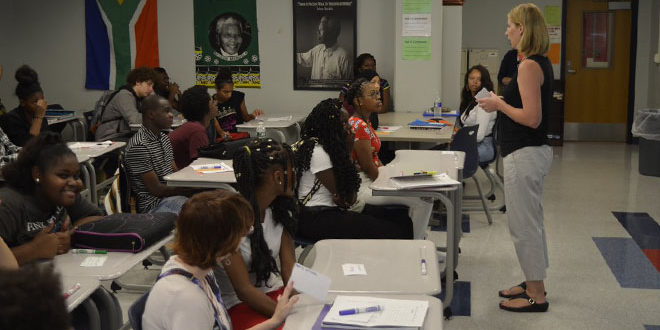 Around 7.5 million students are chronically absent from school in the United States, said Joshua Childs, an assistant professor at University of Texas at Austin’s College of Education, who has researched the issue.

SCSD is not immune to the problem.

Over the past year, SCSD collaborated with an initiative at Harvard University called Proving Ground to develop a set of research-based interventions to address chronic absenteeism in Syracuse. Proving Ground, a program of Harvard’s Center for Education Policy Research that was founded 2½ years ago, said Bi Vuong, the director of Proving Ground.

A variety of factors influence student attendance, including family life, neighborhood conditions and children falling sick with such illnesses as the flu, said Childs, the professor at UT Austin who researches absenteeism.

“A lot of people focus in on the inside-school factors that we assume to be associated with attendance, and not really thinking about those outside of school factors, like neighborhood conditions,” Childs said.

“The logic is simple,” SCSD’s DiFlorio said. “If students are not in school, they’re not learning. But the issues around chronic absenteeism are very complex.”

One research method SCSD worked on with Proving Ground included calling parents of kindergartners who had missed two weeks of school, DiFlorio said. The research found that parents were pre-emptively keeping their children home from school in case of illness, because their work schedules made it difficult to pick their children up from school during the day, DiFlorio said.
DiFlorio said the researchers at Proving Ground also helped arrange conversations with social workers, teachers and parents about ways to address chronic absenteeism. One discovery they made was that seven days of absence causes students to fall two months behind academically, DiFlorio said.

The research also found that certain grades have higher rates of chronic absenteeism than others. For example, kindergartners have a higher rate, Vuong said.

Once these challenges were identified, Proving Ground and the district collaborated to create initiatives to improve attendance, Vuong said.

“A lot of times, parents don’t know how many days their kids have missed,” Jordan said.

SCSD also did home visits this past summer to 250 of the 500 fifth graders who were chronically absent in the past school year, DiFlorio said. A family engagement facilitator made parents aware of the number of days of school their child had missed, and tried to help eliminate potential barriers to attendance, DiFlorio said.

Other initiatives that the district will pilot this year include sending home letters that compare the student’s attendance to other students, and the elimination of half days, DiFlorio said, as many students miss school on half days.

The Proving Ground team will analyze the results of these initiatives later this year and determine if there is improvement, Vuong said.

Childs said policymakers should not discuss school reform without placing attendance at the center of that reform.

“If attendance isn’t at the center,” Childs said, “then the students who would benefit from those initiatives or reforms aren’t going to be there anyway.”