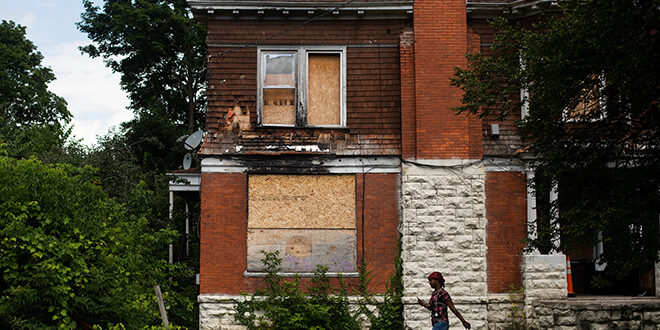 More than $200,000 billed to delinquent properties this year

Home to 1,400 vacant commercial and residential properties, the city of Syracuse has struggled to retain occupants due to a host of issues that plague mid-sized cities in post-industrial America, said Cimone Jordan, who works as a planner for the city. Suburban flight and financial crises, she adds, are atop the list of push factors.

Vacant units, Jordan said during a recent webinar on abandoned properties hosted by the city’s Department of Neighborhood and Business Development (NBD), present health and safety hazards, as well as roadblocks for community development. Not only do these properties act as potential neighborhood fire hazards, they can also lower the assessed values of surrounding homes, Jordan noted. Just today, Syracuse firefighters were called to 217 May Ave. for a reported fire in that vacant house. This marks the third major structure fire that the Syracuse Fire Department has responded to in just over 24 hours.

“If you live in the middle of your block and you have two vacant properties to your left and two to your right and two across the street, your ability to interact with your neighbors is diminished because of all these “holes” within your block,” she added. “When you drive through a neighborhood, you also don’t want to see properties with broken glass, boarded up or unkept properties. It definitely affects neighborhood beauty.”

On a broader context, this problem is not endemic to the Salt City. As of last summer, large companies like ATTOM Data Solutions — that catalog real estate inventory across the country — reported that 1.5 million residential units in the U.S. sit vacant. These figures represent 1.6 percent of all property in the country, the report noted.

The NBD catalogs vacant properties in the city into four categories: “zombie properties,” units managed by absentee owners, properties with a deceased owner and properties managed by the Greater Syracuse Land Bank.

“Zombies,” Jordan explained, are properties in the process of foreclosure with a bank that have fallen into disrepair after being vacated. According to NBD records, the city has identified 290 zombie properties, most of which are single-family homes.

The city’s first step toward combating the rise of these properties is identifying them early and trying to bring them into compliance, according to Jordan. For this, the city relies on complaints filed by neighbors, as well as online national foreclosure databases and “mayor powerwalks,” where Mayor Ben Walsh and other department heads inspect neighborhoods in search of vacant properties.

“We do a very comprehensive background research on the property once we have identified it,” said Jordan, adding that the city looks for utility and inspection reports in order to have a complete picture of the property’s history. “We then email the banks and the owner, letting them know about the violations filed at the property.”

After several other warnings to stay within city code compliance filed by Syracuse’s Law Department, property owners and banks could start accruing fines of up to $500 per day, Jordan said.

So far, this outreach process through NBD has brought 39 properties into compliance, but the department has partnered with other city agencies such as the Bureau of Administrative Adjudication to devise other contingency measures in case owners avoid addressing the disrepair.

“We also have the Blight Busting Program, where NBD hires a minority of women-owned business to do the exterior repairs on properties,” explained Jordan, noting that the city has been able to “blight-bust” 17 properties thus far, racking up $208,287 in services billed to the owners or lienholders. “If they don’t pay, it is then rolled into the property taxes.”

Currently, the Blight Busting Program and the NBD’s compliance requests are on a slightly more lenient timeline for local property owners.

“We do our due diligence before we bring programs like these to independent owners. Especially during (the COVID-19 pandemic), we understand repairs aren’t easy to make right now,” Jordan said.

Despite the slightly more forgiving approach to compliance, Jordan noted the city will employ efforts like Blight Busting and other outreach programs if absentee owners or other repeat- offenders show a trend of noncompliance.

The city plans to expand these efforts, too. Thanks to a grant provided by the State Attorney General’s Office, which awarded $390,000 to the NBD and the Law Department, the city can hire more staff, authorize more “blight-busts” and plan for emergency demolitions of delinquent properties if necessary.

In order to reintegrate vacant properties into tax rolls and to rehabilitate them toward market readiness, the city has partnered with the Greater Land Bank of Syracuse since 2014.

This community organization has received 1,949 tax-delinquent properties through the city or as donations from private owners since its inception, according to Shavel Edwards, the Land Bank’s community engagement specialist.

So far, the organization has been able to sell 1,033 of them and demolish 404 structures in its inventory, Edwards said.

“This has generated $1.6 million per year in estimated taxes from properties sold and returned to the tax rolls,” Edwards added.

With roughly 1,000 properties currently in its inventory, the Land Bank has a listings feature on its website, as well as an interactive map for residents interested in acquiring residential or commercial property.

Another core tenet of the Land Bank’s mission is to promote home ownership. It offers alternative pathways for those seeking to establish a home in Syracuse. The nonprofit prioritizes home-ownership above all, Edwards said, requesting that all buyers plan to establish the property as their primary residence or that they sell to a party who will make the property their home.

Further, Edwards adds all first-time home buyers are required to take a home-ownership education course approved by the federal Department of Housing and Urban Development. In the event a potential buyer seeks to rent out the property, she added, they are required to submit a management plan.

“We look at our buyers and we make sure they are prepared to own a property and all that it entails,” Edwards said.

Here are some home-ownership programs offered by the organization:

Land Bank offers a 10 percent discount on the property’s listing price for owners whose median household income is under 80 percent of the area’s. This program is made available for to-be owners who commit to occupy the space for the ensuing five years. Below is a chart with the median income required to participate in this discount scaled for family size.

— Data reported in 2017 and provided by Home HeadQuarters

Full-time employees with the city of Syracuse, Syracuse City School District  or Onondaga County employees qualify for a 50 percent discount (up to $20,000) off a property’s listing price. This program is made available for to-be owners who commit to occupy the space for the ensuing five years. Edwards said this program incentivizes local government employees and educators to plant their roots in their community. Currently, 89 percent of Land Bank buyers are located in Onondaga County, with 75 percent of them found in the city of Syracuse.