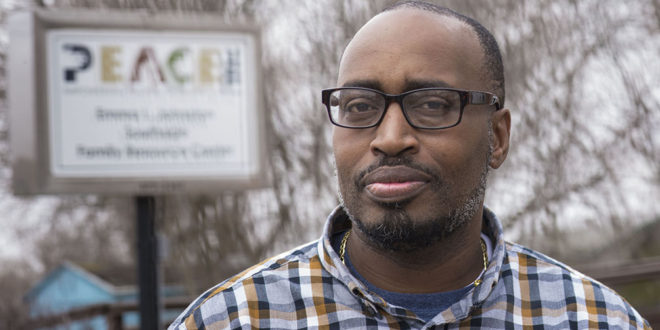 After serving 19 years, 9 months and 4 days in prison, Charles Rivers, 48, returned to Syracuse in 2012 to start again. He worked part-time jobs and started earning his bachelor’s degree. In 2016, he started his first full-time job when PEACE, Inc. hired him to run the South Side PEACE center. | Zachary Krahmer, Staff Photo

Challenges to Complete Story on Pilot Program for Family Reunification

Ex-offenders face several barriers in their transition back to society: finding jobs, adequate housing or even obtaining photo identification. So when a new grant was announced to support re-entry locally, I met with the director of the agency in charge to discuss a way to share a deeper understanding on what such support looks like for each participant and what impact it can have on the community.

While those overseeing the grant were excited to showcase the process and success they felt imminent, the former prisoners were reluctant to trust reporters and to open up. For them, declaring their criminal history for publication, even if working to move forward, could be stigmatizing. Some participants under the grant met with a group of reporters to share bits of their re-entry experiences over nearly two hours. Then a few agreed to be paired one-on-one with a reporter over a three-month period to go deeper and share more about their day-to-day challenges. Some stuck with the project; some dropped out. All held objections to some questions and limited reporters’ access — in fact, almost always denying it — to their close associates and friends.

There were others we met with re-entry experiences outside of the grant who agreed to speak to us. Personal accounts from four individuals are in the works — though, they, too, have shared little other than to agree to personal interviews and some follow-ups — along with two in-depth stories on the grant’s case managers: Charles Rivers and Karen Loftin. Both have personal stories of moving forward successfully from a criminal past. Most of the four have been very open about their pasts, but it’s been matched by an equal reluctance to share a lot about how they are getting along now.

Additional challenges have come when leadership at the bureaucratic level restricted what could be shared. Information and understanding of the grant even seemed to be limited among the parties involved. The grant — a partnership between Syracuse Housing Authority, parole and PEACE, Inc. — required coordinated efforts between three agencies that had previously never worked together. This took time to build and was structured from scratch at the local level due to limited guidance provided from the state level.

Then much of the discussions were kept off the record, with permission never given from the top levels. The grant managers in Schenectady and White Plains, where there were pilots like the one in Syracuse, were split on sharing their progress. While Schenectady refused to speak, White Plains was open until April 13, when its policy shifted due to staff changes, restricting staff there to answer follow-up questions. Then a series of contacts and additional staff changes at the state level provided limited updates on the grant renewal.

Despite the bureaucratic red tape, passion for the work from the individuals involved proved to be the driving force in the success of developing and maintaining relationships with the ex-offenders they were serving. While the future of funding this work remains unknown, I have learned that successful re-entry into society requires help from supportive case managers that released offenders can relate to and depend on, people that parolees see as having their best interests at heart.