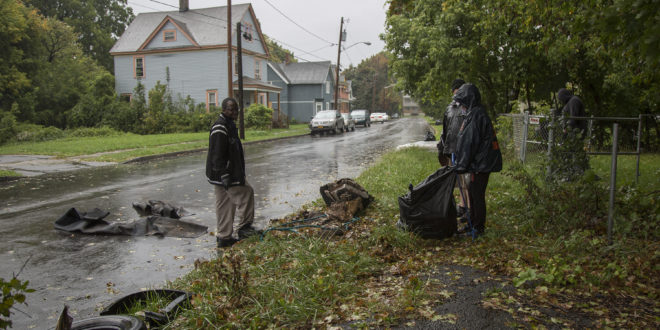 Arlene Brodbek, Pete Nicolini and Jerome Sanders work to clean up an area that has become a dumping site for tires, old TVs, rugs and more during the South Side cleanup organized by Believe in Syracuse on Oct. 8. | Aubrey Moore, Staff Photo

Inspiring residents and beautifying the South Side neighborhood is the sole purpose of a South Side cleanup team that’s been active for a few months. 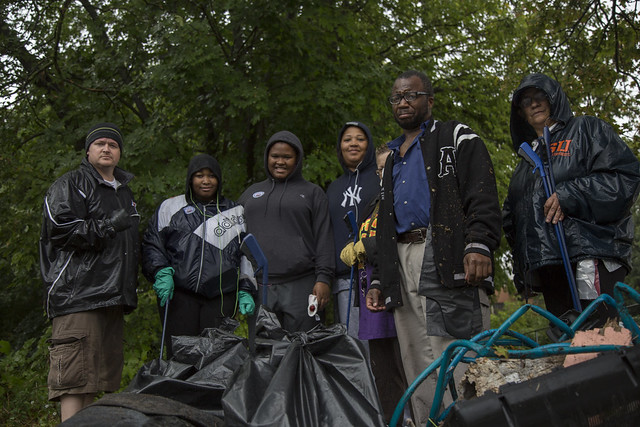 “We found many people weren’t involved in any neighborhood organizations, so that’s how we started our South Side team,” said John DeSantis, founder and executive director of the nonprofit Believe in Syracuse.

Over the past three to four months, the Believe in Syracuse South Side Neighborhood Team has held three cleanup events, he said.

“We’ve gone out and beautified the neighborhood and picked up trash, cleaned up gardens and encouraged volunteers to make the South Side more beautiful,” he added.

DeSantis spotted litter and trash on the edge of the road and knew he wanted to survey the community to see if he could help. A year and a half ago, he distributed a survey to residents, igniting the birth of Believe in Syracuse’s South Side Neighborhood Team. The nonprofit has also organized cleanup teams citywide.

“We want to make the South Side better than what it is,” said Arlene Brodbeck, captain of the cleanup team. “We wanted to show people the South Side is something. It’s not just the bad side of town.”

In survey responses, residents said the proximity of neighborhood parks was a positive draw, and many people favored organizing community cleanups. 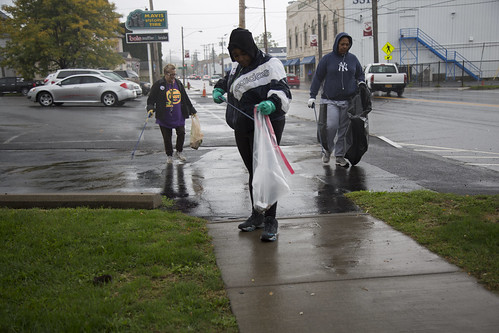 Denise Baker, Sarah Evans and Nyah Waters work together to clean up the neighborhood during the cleanup. | Aubrey Moore, Staff Photo

“There are a lot of things they love about their neighborhood parks — walkability, great assets we have in Syracuse,” DeSantis said. “But one improvement was picking up trash and making the neighborhood more beautiful.”

When people see volunteers out in the streets, it encourages more people to join the cleanups and attend meetings, DeSantis said.

“If you walk into a neighborhood and see boarded-up houses and trash on the side of the road, you will think, ‘This is where I can sell drugs, engage in criminal mischief … any type of mischief,’” DeSantis said.

He believes that cleaning up the community has a lasting effect, and he hopes the volunteer efforts will let residents know their worth.

“It’s not just about the environment or making things look pretty,” he said. “It’s about uplifting the community and inspiring people. When you’re out there picking up your community, it shows that we care.”