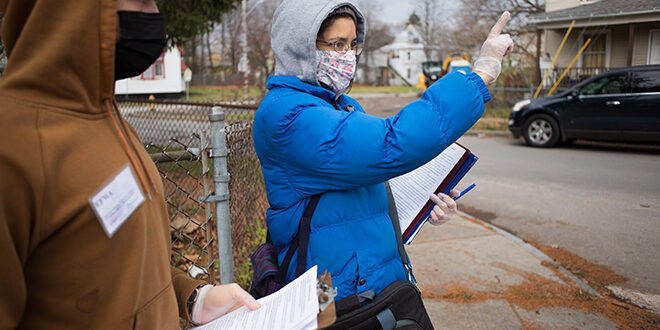 Stacy Bautista directs volunteers while on a canvas in the South Side. | Justin Fogarty, Staff Photographer

By becoming a member of the Eastern Farm Workers Association, you give to receive

A purple scarf swings across her hunched shoulders as her eyes narrow on the stack of papers in front of her. The room smells like the inside of a million old books. She shuffles through the papers, muttering about utility shutoffs and food drives. It’s past 10 p.m. and she hasn’t stopped moving, calling, organizing, since sunrise.

Stacy Bautista, 41, is operations manager for the Eastern Farm Workers Association (EFWA), an organization aimed to end poverty by corralling resources for low-income members in exchange for their time as a volunteer.

“People are losing it, the planet is in trouble,” Bautista said. “If we’re not going to fight now to organize for change, then when? When it’s too late?”

Full-time EFWA organizers are not paid. Bautista’s basic needs — food, housing and health care — are met by the organization.

“It’s not a perfect system,” Bautista said. “I’m not going into this expecting to live a ‘normal’ lifestyle.”

Years of being in academia as a philosophy doctorate student and adjunct professor proved unfulfilling to Bautista. So she took a sharp turn and started organizing as a trial. A month later, she canceled her classes and made a full-time commitment to organizing.

EFWA volunteers coordinator Rex Ramsgard said Bautista is a teacher who cares deeply about issues and wants to take action.

“She’s struggled to (make change) in a typical university setting,” Ramsgard said. “It’s not set up for the kind of teaching and education that she wants to do or is really needed.”

Bautista finds organizing to be the vehicle for fundamental change. She said as much as she wants to pull her hair out sometimes, she has nothing to complain about compared to the unfulfillment she felt as a professor.

“You go home, make up sad stories and tell them to each other, watch crappy movies to take your mind off it, maybe drink, bitch to your friends,” Bautista said. “I’ll take what I have now.”

If organizing is the vehicle to change, many people, Bautista included, just hope the rusted vehicle would sputter less.

“There’s some that desire a comfortable life and of course everyone wants that, but I want it for everybody,” Bautista said.

Bautista flutters around the office, searching for a form that could be hidden under one of three things: a stack of binders, a cup of coffee or a landline — the ones with curly chords most people forgot about. Amid the clutter, she positions her arms on her hips, a silver watch on her left arm, and regains focus with a sharp inhale, slow exhale.

Most Americans’ actions are contradictory to their beliefs, Ramsgard said — like if an environmentalist was to drive a Hummer. Bautista truly cares about her ideals, Ramsgard said, and is willing to put her body on the line for them.

“That’s why she thrives because she’s there wholeheartedly,” Ramsgard said. “She knows what she wants, and she’s going out to get it.”

“I refer to Stacy as a saint,” Dempsey said. “It’s not like she gets a big 401K, but she doesn’t really care for success in monetary terms. She’s getting bank out of the people she serves, and they really, really like her.”

Tim Starkey is one of them. The 72-year-old EWFA member became disabled after getting “crushed” by contracting machinery on the job in the early ’90s, and has been stretching the penny ever since while on disability.

In preparation for major eye and knee surgery to correct damage from the accident, Starkey turned to the EFWA for assistance getting medical supplies after other governmental programs proved futile. His surgery was fast approaching, and he could not find an agency to help. Bautista did.

“Stacy went out of her way to talk to people and get me a box of supplies,” Starkey said. “It shows her backbone and heartfelt desire to help someone in need.”

Starkey was snowed in one winter. He couldn’t shovel. So he called Bautista.

“Lo and behold,” Starkey said. “An hour later a whole car full of people showed up, no questions asked.”

At the end of each month Starkey has about $40 left from disability, in which he donates $10 to the EFWA.

“She’s made the EFWA stronger because she’s not going to take the first no as an answer,” Starkey said.

This hand-waving, not-taking-no-for-an-answer enthusiasm bleeds into her recruitment of volunteers. Dempsey recalls her “lighting up” after recruiting 13 people in one day.

Bautista’s job — being on-call 24/7 — requires a certain separation of the self. Her philosophy is to fight for the issues for all, not just her own. Having a sense of selfhood is as foreign to Bautista as poverty is to Jeff Bezos.

While sitting under a colorful poster that had a quote from indigenous activist Lilla Watson, she said: “If you have come here to help me you are wasting your time, but if you have come because your liberation is bound up with mine, then let us work together.”

Bautista’s eyes flicked up to the poster, but only moments passed until the phone rang again. It was a member. They needed help, and Bautista needed that member.

Isabelle Tavares is a journalism student at the S.I. Newhouse School of Public Communications