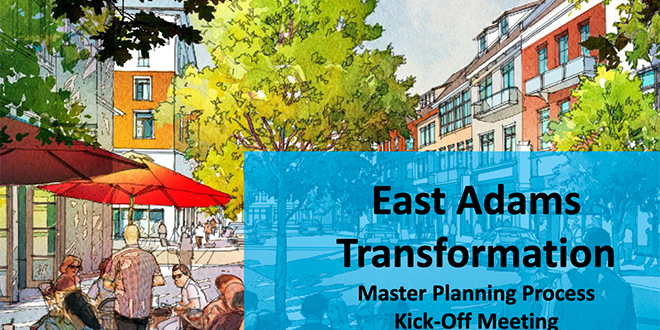 Community Listening sessions will ramp up in May and June

Listen, test and decide is the mission of the upcoming Blueprint 15‘s East Adams Transformation to revitalize the neighborhood.

Three kick-off meetings took place this past week as part of the project’s listening phase.

Developers asked questions, took input and addressed concerns from community members who either Zoomed in or attended in person from the Pioneer Homes Coffee House and the Toomey Abbott Community Room. Syracuse Housing Authority, McCormack Baron Salazar, Urban Strategies and the Urban Design Associates are involved in project planning.

“Nothing has been decided. We’re going through master planning to engage residents in these decisions,” said Stephanie Pasquale, interim CEO of Blueprint 15. “I think sometimes it comes across that everything’s been decided, and that’s so far from the truth; that’s where this learning, listening and deciding process goes between now and the fall.”

Residents can track the project’s progress as well as add comments of their own here.

Current residents are assured that those who qualify for public housing will not see an increase in rent and are guaranteed an apartment in the new development if they want, as long as they remain in good standing with SHA.

The goal is to create a neighborhood of mixed-income residents that includes community centers, local businesses, a grocery store and other facilities and amenities that the residents think should be built. Handicapped accessible units will also be available.

McCormack Baron Salazar, the partnering real estate development firm, specializes in these types of projects. Pam Askew, senior vice president of the firm, spoke at Thursday’s meeting to answer questions concerning the future development. Askew said that during the construction process, residents will hopefully only have to move once. This can be achieved through plans to build the first developments on empty lots, allowing for residents to move in once completed, rather than be displaced as existing properties go under construction. Askew also mentioned that moving expenses and assistance will be provided for no additional cost to residents. The construction will be completed in a series of phases over several years.

One community member from the meeting asked about the feasibility of mixed-income residents “living happily ever after.”

“During this design process, you’ll see what the buildings will look like and the goal is to build a market-rate looking building that is accessible to all income types,” Askew said. “It’s a nice-looking apartment that has walk-in closets and a kitchen island and big windows, … plus there’s a community center across the street where kids can be dropped off at daycare. We really hope that what we design, and what we hear from you in this process, is a community that not only you would want to live in, but others would want to live there as well.”

Pasquale said she and others have examined other communities where mixed-income developments succeeded and will try to learn from those examples while adapting them to Syracuse’s unique needs.

Throughout the meeting, the importance of community engagement was emphasized. Considering the historical significance of the area as the former 15th Ward, a thriving Black community and business district before the construction of the Interstate 81 viaduct, input from current residents is essential to construct a revitalized, inclusive and wealth-building community.

The developers also said there will be opportunity for both local individuals and businesses to profit from the development. In previous projects, McCormack Baron Salazar has provided training for residents to learn the skills necessary to work on a construction site, then hired them. Residents can also apply for property management positions, which will be needed even after construction concludes. Local sub-contracting businesses also have the opportunity to be hired.

The new buildings will all be modern, updated facilities built to meet green standards, meaning they will be built with sustainability with the environment in mind. Residents will have to pay for their own electricity, but those who qualify for public housing will have the average electric cost subtracted from their monthly rental rate, and green standards mean the apartments will be more efficient and less wasteful, which translates to a lower bill for its occupants.

A May meeting schedule has yet to be released, but dates will be announced on Blueprint 15’s facebook as well as on fliers around the various housing developments in the East Adams Neighborhood. Arlaina Harris, director of community partnerships for the project, said meetings for Spanish-speaking and Somali-speaking residents will be held the week of May 6.

“The best case scenario is for families that live in the neighborhood to be able to participate in any prosperity that results in redevelopment, as well as create these durable pathways for economic independence and economic opportunities,” Pasquale said. “So it’s something lasting and sustainable for generations to come.”