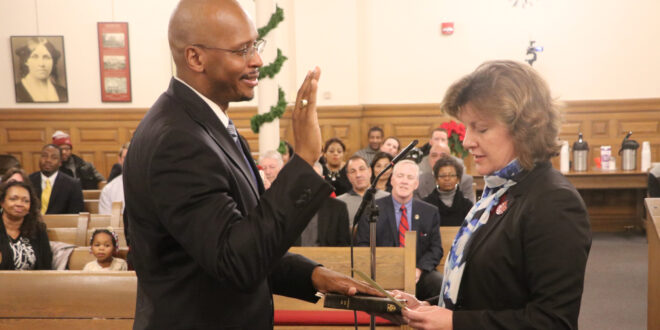 Judge Derrek Thomas was sworn in by Mayor Stephanie Miner in 2016. This year, he's been just one of over 100 New York judges of color speaking out to reaffirm their commitment to ensuring equal justice and treatment to all under the law. | File Photo provided by the city of Syracuse

In the wake of continued killings of unarmed minorities by police, justices identify areas of racism in court system

Embedded in a new report on racial bias in New York state courts is a link to a segment of the popular TV show “What Would You Do?” starring John Quinones. The episode can’t substitute for the exhaustive findings of The Judicial Friends Association, a long-standing organization of Black and other minority judges. But it neatly distills how implicit racial bias seeps into almost every human endeavor.

The segment features actors posing as bike thieves along a busy walking and cycling path — first a White male, then a Black male and finally an attractive White woman.

You can guess how it goes.

The White thief is all but ignored as he hammers and saws on the thick chain lock.

The Black thief is quickly surrounded and hounded by a large group of people, some of whom call 911 on their cell phones.

And the attractive blonde?

One chivalrous male cyclist literally helps her steal the bike even as the “thief” admits that’s what she’s doing, all while the man’s wife watches in disbelief.

“Reg, I’m going to call the police,” she snaps.

The video is used in U.S. District Court in Washington State to educate prospective jurors about biases people can harbor without realizing it— implicit bias. Adding it in New York state courts is one of dozens of recommendations found in the 75-page report.

“It’s long and it’s probably dull,” said association President and Manhattan Supreme Court Justice Erika Edwards with a chuckle. Perhaps. But the thoroughly annotated take-down of New York’s labyrinthine court system has a ring of authority, eschewing finger-pointing and naming names in favor of exposing entrenched patterns. Those range from disrespectful treatment of minority attorneys by court officers to a dearth of promotions extended to Black judges to addressing chronically negative attitudes about the police held by minorities so they’re not excluded from juries.

The report was submitted this month to former director of Homeland Security Jeh Johnson, who was appointed to head The Commission on Equal Justice in the Courts. The panel was established in response to the killing of unarmed racial minorities by law enforcement and ensuing demands for change throughout the criminal justice system.

Edwards deemed it a valuable opportunity to finally be heard on longstanding issues of racial fairness.

“I don’t think some people understand what other people are going through —  the  pain,” she said.

Even little slights,  intentional or not, have a way of festering. Edwards recalls that years ago, as lead defense counsel in a high-profile terrorism trial in New York, she was the only defense lawyer omitted from the courtroom sketch widely circulated to media. It was as if the artist could not reconcile that the most important member of the defense team was Black.

Such biases reverberate in major ways.

According to the report, none of the executive judges in the Office of Court Administration, which oversee day-to-day operations of the system, are Black. Just three Black judges hold statewide positions and just six Black judges sit on the 81-member Court of Claims appointed by Gov. Andrew Cuomo.

The numbers for elected versus appointed Black judges are better overall — but not beyond New York City. Of 143 Supreme Court justices, just nine (6.3 percent) are Black.

Syracuse City Court Judge Derrek Thomas, one of three Black jurists in Syracuse (the other two are Vanessa E. Bogan and Gordon Cuffy), termed the document an important first step not just toward revamping the court system but the institutions that feed into it. Of every 10 defendants he sees in his court, seven to nine are Black, depending on the day. By contrast, only three of every 10 city residents are Black, according to the 2010 census.

“There’s more work to do collectively” to combat racism both outside the courts and within them, Thomas said.

While it’s no secret that racial bias infiltrates all aspects of society and government, the human toll can be extraordinary when it’s the criminal justice system. As the report notes, a decision by an officer to charge a suspect with a felony verses a misdemeanor has immense consequences for the defendant, even more so when there’s a lack of diversity in the prosecutor’s office, as is often the case.

“Discretion does have a substantial impact in charging people,” said state Supreme Court Justice Gordon Cuffy. “Once you’re charged it puts you in a certain position legally.”

Taken as a whole, the report is a call to upend the notion that Whites are inherently good and deserve benefit of the doubt while Blacks are inherently threatening. The enormity of that challenge is laid bare in the Quinones video. In the span of an hour, about 100 people pass the White male thief. Only one couple intervenes seriously enough for the producers to rush in to stop the gag. Among the passerby who do nothing: two Black women. Asked later why they didn’t call police or confront the man, the women say they assumed the man’s business was legitimate. Says one:  “Young White men don’t usually carry burglar tools.”