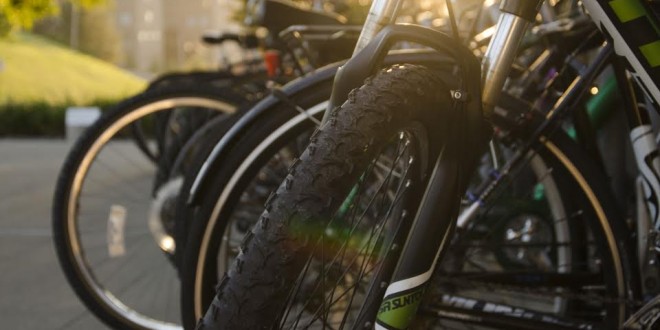 The phrase “it’s as easy as riding a bike” isn’t one Mike Lyon uses.

The Onondaga Cycling Club president said his 18-mile trek to work is a zig zag from Baldwinsville to the city. He avoids certain streets because he can’t safely share the road with motor vehicles, and there are no bike lanes for him to use along the way.

“I’ve had bottles thrown at me,” Lyon said. “I’ve been cut off, I’ve come close to being hit a couple times.”

Bike safety in Syracuse is something the city has been working on since it implemented the Syracuse Bike Plan in 2011, claiming that any road developments would incorporate cycling traffic in their changes. Bicycles are, by law, a transportation vehicle and therefore follow all rules of the road that motorcycles, tractor-trailers, cars and other motor vehicles abide by.

The Onondaga Cycling Club rallies a large crowd of cyclists and hosts rides on different weeknights, mainly through the summer. While they’ve pretty much wrapped up for the season, Lyon said during the summer’s Tuesday night rides, where riders of any level are encouraged to join, the club saw an average of 45 people each week.

“We don’t cycle in the city very often,” Lyon said. “There are more people out on bikes now — it’s a big crowd. It’s partly social and it’s partly the exercise.”

Disorganized, at best, is how Lyon describes the status of bike lane availability and placement in Syracuse.

“They’re good if they go somewhere, but unfortunately in Syracuse, they just kind of end,” Lyon said. “And as far as the club using bike lanes? No. It just doesn’t happen.”

Common Councilor Bob Dougherty said he frequently rides through the South Side on his way to work. While there’s some availability of “sharrows” — a shortened version of “share the road” — he said his commute as a cyclist isn’t smooth sailing the whole way.

“When I ride, normally I don’t ride on South Salina. I usually go on State Street or Midland because there’s not much traffic,” Dougherty said. “You just have to be a defensive driver on a bike, especially on the South and West sides where people aren’t always following the rules.”

Last spring’s attempt at bike lanes around the Syracuse University campus was a disaster, Mike Lyon said. Having a bike lane exclusively on one side of the street forces two lanes of bike traffic to share the same space, and puts bikers on the wrong side of the road if they’re not biking with the vehicular traffic.

“I come up University, and you have to go on the wrong side of the road to get into the bike lane,” Lyon said. “They’re really nice and they’re definitely separated from traffic, but there’s been times when people come screaming down that hill at me, so it’s a little different.”

Lyon said he understands the city is making an effort to incorporate bicycle traffic into its plans. Other areas he’s biked in — downtown Ottowa, for example — can be so much more receptive to cyclists riding alongside cars, and Lyon said he’s waiting for that to happen in Syracuse.

Jen Grygiel, associate professor of communications at the Newhouse School, bikes to work just about every day. A recent transplant from Boston, she said Syracuse drivers have different habits — like rolling through stops — that make it difficult to share the road.

Although there’s less traffic in Syracuse, both that of cars and cyclists, Boston offered a different atmosphere and acceptance toward two-wheeled vehicles, Grygiel said. There were more bike paths and certainly more bikers that forced drivers to be aware of their presence.

Biking to work involves a certain level of dedication. As an owner of five bikes — a few of which she shares with her wife — Grygiel said she loves the relaxing combination of exercise and thinking time that result from her mile-long commute to the SU campus.

“I think I just started doing it because I needed more exercise,” Grygiel said. “I liked it way more than I thought I would. I really loved it. It made me think — it was almost like meditation.”

Taking a break from the seemingly endless attachment to cell phones and social media became a welcomed release, Grygiel said, and she’s been biking to work since.

Steve Morris, owner of bike shop-slash-cafe Mello Velo in the Westcott neighborhood, said the city’s efforts in aiding bicycle traffic — though disorganized — have some merit.

“There isn’t a lot of continuity,” Morris said. “It’s always this constant battle — there isn’t always room for cars and bikes. I think that the city’s definitely trying, and also compared to a few years ago it’s a lot better. But there’s a lot of room to improve.”

Morris said while he was at a city council meeting regarding bicycle lanes a few months ago, he spoke with a common councilor who assumed cyclists rode on the opposite side of the road. Those in charge of implementing traffic plans should have a good understanding of what laws cyclists must abide to, Morris said.

Debbie Kogut, traffic safety coordinator for the Onondaga County Sheriff’s Office, said she doesn’t bike to work — it’s both a safety issue and a distance issue for her.

The disconnect between cyclists and motor vehicle operators exists due to a variety of variables, Kogut said. Drivers may not be able to see bicyclists, and cannot predict cyclists’ moves on the road — and vice versa.

Defensive driving, behind both the wheel and the handlebars, is key to traveling safely on a shared roadway, Kogut said. It also helps to have experience sharing the road as a cyclist before, since you can then share the perspective and needs of a cyclist while driving a car, she added.

“They have the wrong information on how to deal with each other,” Kogut said. “You’re going to be much more conscious if you have both experiences.”

Above all else, Morris emphasized safety. He knows too many people, he said, who’ve been hit by cars or “doored” by people who don’t look before getting out of their cars. Making your presence known on the road is vital to biking, he said.

“There’s a lot of barriers between cycling in Syracuse — it’s really hilly, we have lousy weather. It isn’t the easiest,” Morris said. “I’m a big proponent of just making yourself visible — wear a bright ugly jacket and lights. Make yourself visible and go by the rules.”

— Article by Georgie Silvarole, Urban Affairs reporter for The Stand