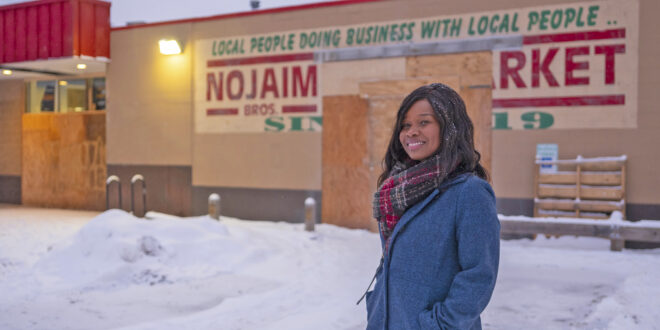 Kelsie Montaque typically ends phone calls with her brother by saying: “It’s a lot, but I’ll figure it out.” A flurry of to-do lists line her desk, full of organizations to consult. Her 6-year-old daughter, cozy in an all bubblegum-pink outfit, happily putters in the background with her iPad, learning remotely.

Montaque, 40, started a new consulting firm last year. She chases opportunities that others run from. It’s a lot. But she’s figuring it out. Her faith, and to-do lists, center her.

Her current focus is serving as director of the healing program for Brady Market, a new grocery store set to open mid-April on Syracuse’s Southwest Side. The “unconventional” store plans to holistically address food insecurity and help heal the needs of the community, said Kevin Frank, director of the Brady Faith Center.

“I told Kevin when I started, ‘I want to do things bigger than me,’” Montaque said. “Every time I get to sit with our trainees [employees] it does something for me too. I’m pouring into them, and they pour into me.”

Frank hired Montaque’s consulting firm, One Voice Consulting, for its mission to aid organizations that “tackle” social determinants of health, including such factors from both the physical and social environment that act as barriers to things like employment. Prior to starting her own firm, Montaque worked with CNY Care Collaboratives, a medicaid redesign grant through Gov. Andrew Cuomo that worked to improve how healthcare is offered to underserved populations.

“I’m good at what I do, and I do it, but there wasn’t passion behind it,” Montaque said.

In the midst of that five-year grant, she realized her passion for collaborating with community-based organizations — specifically ones that work to dismantle social determinants of health.

“I’ve always been about people,” said Montaque, stressing her passion for the underserved. “I knew I wasn’t a direct service worker, but thought I could have a voice at the table to influence policies.”

Brady Market was just the home for this passion.

“Kelsie wants to be part of something that’s transforming hearts and minds,” Frank said. “Because our mission and vision is part of that, that’s helping her stay focused with the challenges of a startup.”

Situated in the former NoJaim Brothers Supermarket, the new market will revive the space. The grey sensor doors may slide open in the same way, revealing the typical grocery set-up, but certain aspects will make this store stand out, Montaque says.

Heaps of seasonal produce will take center stage. Produce will be marked at bargain prices, many offerings even grown two miles away at The Brady Farm. Behind the refrigerated section, one will find “healing circles” where employees take classes on parenting, anger management or meditation. The classes are taught with a trauma-informed care approach. Trainees learn neuroscience to gain a deeper understanding of how trauma impacts the brain, and conversely, how trauma impacts relationships.

The concept is based on a model by Homeboy Industries, a gang rehabilitation program in Los Angeles, and Bargain Grocery in Utica, Frank said. Montaque helps weave together the strands of the layered concept.

According to a 2017 Onondaga County Health Department report on the food environment of Syracuse, half of the city’s children live in poverty, with nearly one-third of households having no vehicle available and 31 percent of households relying on SNAP benefits.

Montaque saw the underbelly of these statistics while working as an intensive home-based therapist for juvenile youth. She realized that everything is connected; such statistics are not just restrained to healthcare or nutrition. She couldn’t walk into a home to solve merely one issue because many others clouded her ability to get down to the heart of the therapy.

“It would be futile to do therapy when they’re losing housing, they have no food, they’re sleeping on debris-filled mattresses on the floor,” Montaque said.

Brady Market recognizes how connected these issues are, Montaque said, thus it utilizes a holistic model. Many programs fail, she believes, because funding exists to address only one issue.

Montaque’s “outcome-based skill set” is a primary reason why Frank wanted her on board. Grant money is given to organizations that have data to back what they’ve done, Montaque said. She measures organizations’ impact through the patient activation measure. It tracks a person’s motivation and ownership for better self-management of their physical, mental, behavioral health, Montaque said.

Montaque is no stranger to adversity. Growing up in Albany with five siblings to a single mother, she learned early on how to be independent, said her younger brother, Eldon Harris. Often looking after Harris, now 37 and a financial advisor, while her mother was earning her nursing degree and providing for the family, Montaque learned to pivot from her own life to taking care of others.

“She’s a spiritual gal and relies on her faith to carry her through,” Harris said. “She never lets herself get overwhelmed to where she can’t handle it. Instead of having a defeated spirit she thinks, ‘Hey, let’s have another go at this.’”

She was drawn to serving the underserved at a young age, often found volunteering at soup kitchens with the local church.

“I grew up understanding what it was like not to have a lot,” Montaque said. “If I can help people get out of their situation, I do it.”

This blend of independence and taking care of others fueled her drive to launch her own firm, Harris said.

The new market is a start-up, and the pieces are always moving, Frank said. For Thanksgiving, Montaque coordinated a food distribution that fed 116 people. She called multiple organizations and asked if they wanted to partner. This entrepreneurial mindset is encouraged by Harris.

Running her own consulting firm allows Montaque to see organizations from a bird’s eye view, Harris said, and allows her the fluidity of working with multiple organizations. As for the future, she hopes to work with organizations that are “deep” in the South Side of Syracuse where there is a high concentration of poverty.

Frank asks any potential employee one question before they are hired: “Are you willing to stand in awe of what the poor have to carry, rather than in judgement in how they carry it?”

“Kelsie got that right away,” Frank said. “She was fully on board.”

LOOKING TO THE FUTURE

Through her firm, Montaque strives to bring educational services to “break through the cycle of poverty.”

“On paper I look good,” Montaque said. “I’ve always accomplished a lot of things. But within me I see this real vision.”

This vision is to open a residential facility for young boys in the inner city who may be experiencing homelessness or are in an adverse home situation. As the boys are at her facility, Montaque’s end goal is to reunite them with their families in a healing way.

While working in school districts she noticed a lot of kids did not have a good home environment.

“No matter how much we taught them, we’re losing them,” Montaque said.

Her hope is to expand the residential facility to young girls, as well. She’s willing to see how it grows. It’s a lot. But Montaque is figuring it out.

Isabelle Tavares is a journalism student at the S.I. Newhouse School of Public Communications