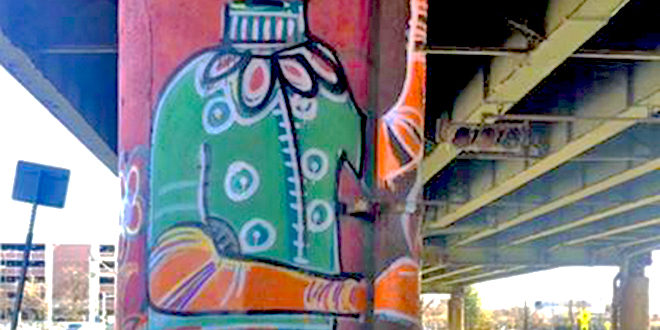 315 Alive, a local public art collective, has painted several murals between Adams and East Fayette streets. They say many more will be added in the summer. | Provided Photo

Artist Collective Brightens Below I-81 Viaduct

The intersection between East Adams and East Fayette streets has gotten much more colorful. Four columns beneath the I-81 viaduct are painted with murals as local artists’ collective 315 Alive’s city beautification initiative.

315 Alive is a collective of Syracuse-area public artists, street artists and others in the arts who want to beautify the city, making it a more beautiful, exciting and buzz-worthy place.

They believe that a healthy Public Arts Program is the front line of a healthy arts ecosystem. The collective works to promote community engagement and encourages new talent, opportunities and investments in the Syracuse arts space.

According to the founder and managing partner, Jacob Roberts, a local artist, 315 Alive was founded in response to the creation of the bureaucratic tangle of the Public Arts Commission.

“315 Alive really was an attempt at creating an organization that could get grants (and) donations,” Roberts said. “We have most of the paint suppliers in Syracuse donating mistinted paints or overproduced paints.”

“We went out on a Sunday when there wasn’t really a lot of traffic. You know, we did everything we could to take those precautions,” Roberts said. “And sure enough, you know, a police car came and they’re like, ‘what are you doing?’”

But after a brief moment of confusion, where Roberts thought he and his artists would be arrested for trying to help their city, Mayor Walsh called.

“Just as it was coming to a close, one of the officers came running out of his car and said ‘I literally just got off the phone with the mayor,’” Roberts said.

Mayor Walsh thanked them for their work and their efforts at beautifying the city and asked that they continue, Roberts said.

The group spent six hours on the murals that day, yet many remained unfinished. 315 Alive hopes to make this a community initiative where citizens can come and paint columns themselves. Roberts hopes to be able to organize that once social distancing isn’t the norm.

Fletch Crangle, one of the artists who worked on the mural, believes public art is necessary. Born and raised in Syracuse, Crangle thinks a lot of the city can be beautified.

“We just tried to make every day more beautiful. A lot of what we’ve been doing is definitely stimulating … bringing vibrancy and positivity,” Crangle said.

“I had been out of town for a few weeks, but when I pulled off Exit 18 towards Adams Street, I saw them right away. I’ve taken that exit a hundred times this year, so it was an obvious and beautiful change to a landscape that’s rather gray.”

The murals are located between Adams and East Fayette streets next to the Crowne Plaza Hotel.