The Cut-A-Thon is a memorable day for a child. Parents come to this event to see their children smile. Barbers volunteer their time to give free haircuts, and local businesses donate food and money to make the Cut-A-Thon possible.

The Cut-A-Thon is an event organized by Al Lyda every year for the last 20 years.

“There was nothing going on for the inner-city, so I said let me do something for the kids,” Lyda said about why he began the event.

He knew he could make a child’s Christmas an unforgettable one, and he did just that. Children received a free haircut, enjoyed complimentary pizzas and hotdogs and participated in a raffle in hopes of winning a bike during the event held Wednesday, Dec. 18, at the Southwest Community Center. 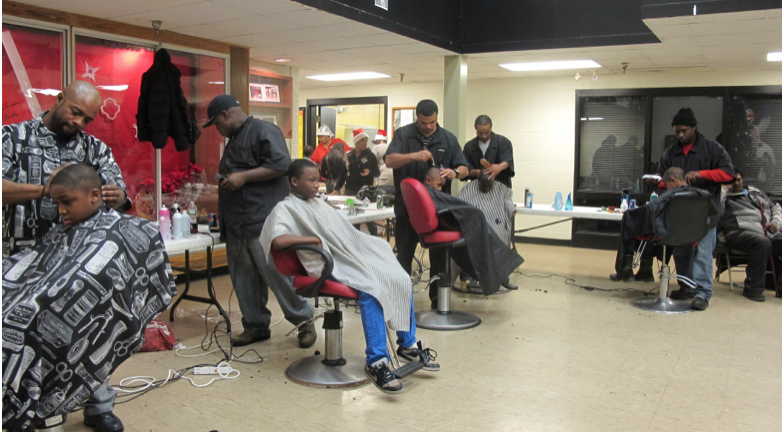 Five barbers volunteered to give free haircuts to boys during the annual Cut-A-Thon held Dec. 19 at th Southwest Community Center.

Kids could be seen running around the gym and playing basketball, while others signed up for the bike raffle, ate or had their hair cut. While the boys got free hair cuts, the girls received free gift certificates to a hair salon.

Volunteer barber John Johnson, 40, said it was his first time giving free haircuts at the Cut-A-Thon.

Additionally he serves as the president of Faith and Hope, a community center on Montgomery Street.

“This is just another way to give back to the community in courtesy of Faith and Hope,” Johnson said. 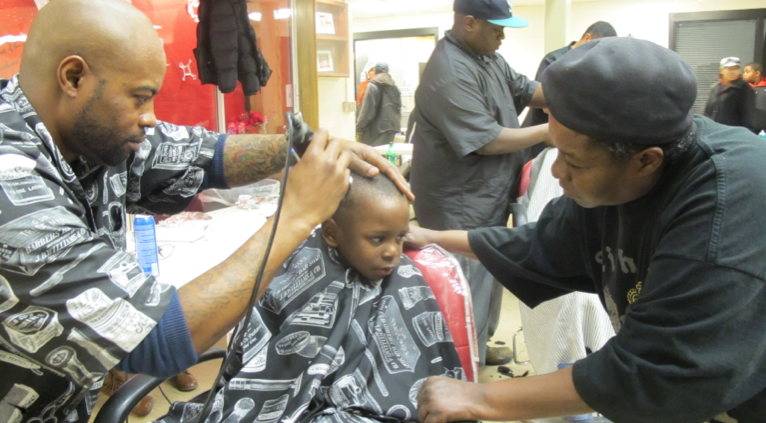 Diane Rutledge comforts her 3-year-old great-nephew because he was startled by the sound of the razor during his first professional haircut given by a barber from J-Styles barbershop. “I’m right here," Rutledge reassured.

Diane Rutledge brings her family every year to the Cut-A-Thon.

“They help out with the community; it is a good thing,” she said.

She lives in the area and often brings her family to the Southwest Community Center. This year Rutledge watched her 3-year-old great-nephew get his first professional haircut.

Jay Dorsey, 32, barber of J-Styles Barber Shop, volunteered for his third year and believes the event teaches youth about giving during the holiday season.

“Kids get a new haircut to go into the New Year with,” Dorsey said. “It’s a lesson … sometimes people do [gestures] out of the goodness of their heart. It’s just a lesson in life.“

The Syracuse Golf Association donated money toward bike purchases, just as they do every year. This year, 19 bikes were given away. Lyda even made some bike purchases himself in order to see that as many youth as possible could benefit.

Lyda, who comes from a family of 13 siblings, said his mother had a hard time providing the extras. 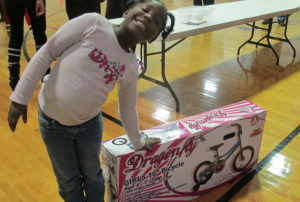 Xymone Everson, 6, won a bike. When her name was called, she walked up to the stage to pick up her prize, but couldn’t. The box was too heavy. She screamed across the gym to her mom.

“All we got for Christmas for years was something to eat. You’d be coming downstairs in the morning — running down — and there’d be nothing there,” he recalled. “But me and my siblings understood [why].”

He knows for some of the youth in attendance this could be most of their Christmas.

“It’s just a little something, just to give back,” he said.

About a month and a half ago, Lyda started putting the event together. Just like every year, he called local businesses asking for donations and gathered volunteers. Hoffman Hotdogs donated 600 hotdogs, Tops Friendly Market donated 400 buns and Wings Over Syracuse donated the pizza and wings. Five Barbers gave free haircuts during the event which ran from 2 to 8 p.m. The Syracuse Golf Association donated money toward the purchase of 19 bikes.

— Article and photos by Vekonda Luangaphay, graduate student at the S.I. Newhouse School of Public Communications