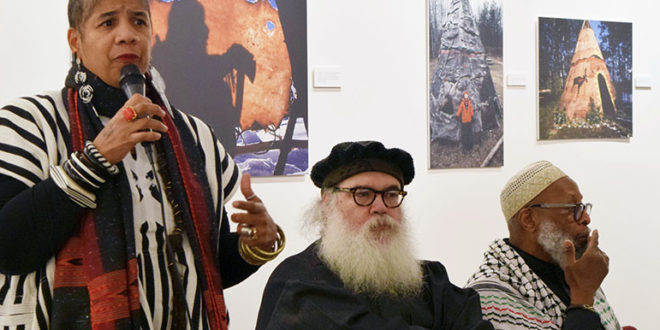 The crowd cheers as community organizer and social worker Gwen Chaffin announced that activists and organizers were at ArtRage Gallery to correct misconceptions about the Black Panther Party during the “From Panther 21 to 21st Century Revolutions” panel discussion held Feb. 23.

Guests included Sekou Odinga, an original member of the Black Panther Party and a member of Panther 21; dequi kioni-sadiki, chair of the Malcolm X Committee and prisoner/human rights activist, and Matt Meyer, senior research scholar at the University of Massachusetts/Amherst Resistance Studies Initiative.

Over the course of the evening, the panel advocated for human rights and political prisoners to work towards relieving the plight of groups of people who have been oppressed and demonized.

Meyer began by defining the context and saying that young men growing up in America missed the idea that democracy wasn’t for everyone. He spoke about the book “Look for Me in the Whirlwind: From Black Panther Party to 21st Century Revolutions,” edited by kioni-sadiki. Meyer explained, the text fills many holes of the stories previously recounted of Panther 21.

The story of Panther 21 — of the longest trial in New York state history — and what this trial did to the Black Panther Party locally and nationally, despite the Panthers winning form a legal point of view, Meyer said, ushered “in a wave of oppression.”

“That story has hardly been told until this book,” he believes, noting that the party was a movement demonized as terrorism.

Odinga shared that the Black Panther Party began many programs that people know today such as its Breakfast Program, where members of the party would serve a free meal to black students before school. This program launched in 1969 has been adapted into many schools across the country.

“There was more to us than fighting back against the police,” he said.  “Our main objective was to serve the community.”

Because many only saw the organization as people who fought police, the Black Panther Party was attacked, Odinga explained.

“Here we are, these young poor black people doing the things the government should have been doing,” he added. “The government didn’t like that; they didn’t like us raising all these contradictions. And we were attacked for it.”

The 21 leaders were targeted, arrested and held in prison, Odinga said.

“That speaks to the amount of work that has yet to be done,” she said. “I speak on behalf and advocate for political prisoners because I want to shadow the myth that they don’t exist. I want to counter and challenge the narrative that has criminalized movements and organizations that serve and defend the people.”

She explained that the same system of criminalization and demonization that happened to particularly black and brown communities during radical movements in the 1960s and ’70s, is the same demonization happening today with immigrants and indigenous people.

Members of The Northeast Political Prisoners Coalition, which works to free political prisoners, were present and urged the audience to sign a petition.

The second half the of the evening included an engaging Q&A. One organizer of the event questioned the panel speakers on why they thought many African-Americans were not present at the event. After gaining insight from kioni-sadiki, Marcus Jackson from the Central New York Poor People’s Campaign explained the reason was that as a community, they’ve become complacent and used to oppression. He added that many black and brown people don’t realize the importance of being involved in organizations and question how such involvement is going to change the quality of their life.

He said he believes it is important to know one’s history in order to become empowered.

“If we don’t know where we came, we don’t recognize where we’re going,” Jackson said.