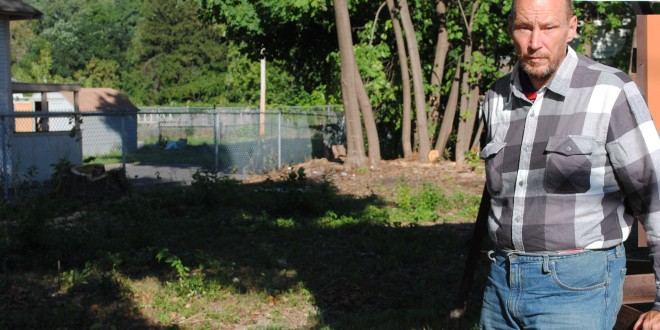 A Space of His Own

With the help of a community group, a veteran will gain a home

Ted Bauer, 59-year-old Army veteran, has no permanent home to call his own. He lacks a place to return to each night, put his feet up and

rest in comfort. But that’s not what his friends say defines him. Nor, he said, does he let it stop him from doing the things he wants and feels he should be doing.

Bauer will be a resident of A Tiny Home for Good, said its executive director, Andrew Lunetta. The non- profit organization, dedicated to providing safe and affordable homes to the homeless, has proposed building on a plot of land at the corner of South Salina Street and East Glen Avenue. The first set of homes on this plot would be reserved for veterans.

“It’s not just for me, it’s for other people,” Bauer said. “It improves their lives, too.”

Bauer is originally from Denver, Colorado, but moved to Syracuse in 1992 after being in the Army for 10 years. He stayed in Syracuse because some of his friends were here, and he had gotten involved in some church groups, specifically one at the Brady Faith Center, 404 South Ave. He got involved in the men’s Bible study group and Pedals 2 Possibilities, a program to promote individual well-being. He has been a member of the community ever since.

However, he has lived without a home since 2011. Since then, he has spent his days at the Hazard Branch Library, 1620 W. Genesee St., and the Brady Faith Center. At night, he stays at friends’ homes or at shelters such as the Rescue Mission. He’s what the U.S. Department of Housing and Urban Development refers to as a couch-hopper. He’s not in the homeless category because he’s not on the streets or in shelters. 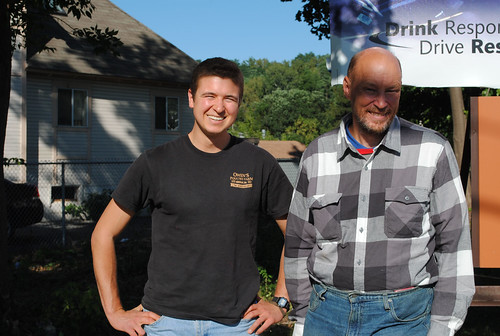 Andrew Lunetta, director of A Tiny Home for Good, stands with Ted Bauer, a future resident of the project.

Shelters are difficult for a clean and sober person like Bauer because the majority of shelters are full of struggling individuals, and homelessness isn’t their only problem, said Kristen Kratzert, a physician at Women’s Wellness Place. She also is chair of the board of directors of A Tiny Home for Good and has known Bauer for more than two years. She considers him a good friend.

Bauer has been a driving force in her life, she said, because without him, she never would have gotten involved in half the things she does, such as CNY Tour de Cure, an annual fundraising bicycle ride to help find a cure for diabetes.

“Ted is always, always working to better other people, including himself,” she said.

Being without a place to call home is hard, but Bauer says he doesn’t let it get the best of him. He spends much of his free time with friends and caring for others — whether that’s in the form of fundraising or making someone feel better when they’ve had a bad day.

“The secret of life is helping someone else,” he said.

Lunetta describes him as an incredible individual who is sensitive, caring and dedicated.

“If you ask him to do something, it’s going to be completed, no question about it,” Lunetta said.

Bauer has ridden his bicycle across the country four times, Lunetta said. The trip is with Cycle America, Bauer said, and cyclists ride from Seattle, Washington, to Gloucester, Massachusetts.

Brady Faith Center Coordinator Trevor Williams, who has known Bauer for four years, says Bauer has taken time to better himself by going back to school.

When Bauer found out that another friend of four years, Robert Walter, had Type 2 diabetes, he got involved with CNY Tour de Cure.

Bauer’s friends are hoping that the tiny homes will be built and that Bauer will finally have a space to call his own. They want to help him just as much as he has helped them, especially since he has served the country.

“I know that Ted would do the same thing for me if I was in the same situation,” said Bob Mumm, who has known Bauer for 20 years and has been a member of the Brady Faith Center since 1997. Moving into a tiny home, which is a total of 250 square feet, would give Bauer independence, he said.

Lunetta started A Tiny Home for Good in 2014 for this very reason. He first got the idea while volunteering at the Catholic Charities men’s shelter. He saw men move from the shelter to permanent housing but have to return to the shelter because the housing wasn’t actually affordable, it was infested with bed bugs or dangerous.

He realized there had to be a better way to help people facing homelessness. While trying to figure out the better way, he fell in love with the tiny home movement. That’s when A Tiny Home for Good was born.

He said that interacting with and becoming close friends with the men at the Brady Faith Center who would truly benefit from the project is the reason he continues to pursue building the homes despite obstacles. At two community meetings recently, residents voiced their concerns about the homes and about the people who will live in them. It also has taken Lunetta time to find the right property on which to build the small homes while meeting zoning standards for multi-family homes.

Lunetta said he believes that it is the right thing to do and that there have to be better options rather than sleeping under a bridge.

“I find it very difficult to imagine that someone doesn’t deserve a home,” he said.