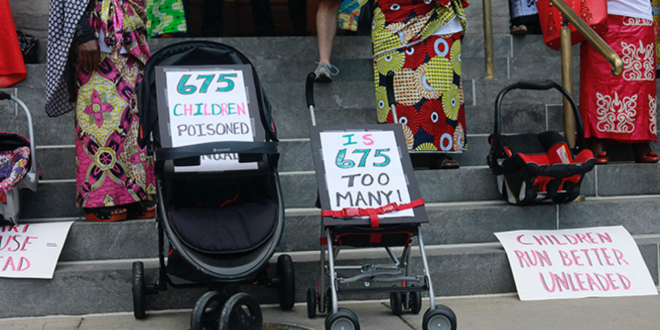 A symbolic demonstration held to push for a Lead Safe Syracuse

By Ashley Kang and Jenna Wirth

Sunday afternoon mothers placed empty strollers outside of City Hall as a symbolic reminder of whose health and safety are at stake in implementing the Syracuse Lead Abatement and Control Ordinance.

The demonstration was organized by Families for Lead Freedom Now, a Syracuse group advocating for children and families impacted by lead paint poisoning, the Syracuse Chapter of the Democratic Socialists of America, CNY Solidarity Coalition and Onondaga Votes. Demonstrators gathered to encourage the adoption of the new city ordinance that would boost the enforcement of lead paint violations.

The amended ordinance would allow the city’s Division of Code Enforcement to test and cite property owners for violations of the presence of lead in homes. The Common Council was slated to vote on the amendment Monday, but the vote was held and further discussion on the topic may be held Thursday. A date for the vote has yet to be set.

The proposed lead ordinance would get ahead of lead by identifying and eliminating lead hazards before a child is exposed.

After conducting an environmental impact study to measure the economic, environment and social impacts of enacting the new ordinance, the Syracuse Common Council hosted a 30-day public comment period on the proposed ordinance to revise the legislation as needed. They should vote on the new law in the coming weeks. Currently, the presence of lead isn’t a code violation, meaning when code inspectors check a property, they can cite that the house has chipping paint, but not that the chipping paint is a health hazard. The drafted ordinance would require city inspectors to test every property for the presence of lead with mandatory dust wipes and cite any lead paint as a code violation.

In 1978, the federal government banned the use of lead-based paint in housing. Over 90% of homes in Syracuse were built before 1980, according to the U.S. Census. In 2018, 211 county properties had lead hazards, according to the Onondaga County Health Department.

Often, lead is found on windowsills and door frames because those objects have many movable parts, making the paint more likely to break down over time, explained Travis Hobart, medical director of the Central/Eastern New York Lead Poisoning Resource Center at Upstate Medical University.

Hobart also explained that children are more susceptible to the effects of lead. “Their bodies absorb it greater than adults,” he said.

Lead also has a sweet flavor, which makes children less likely to spit it out, Lane added. The amount of lead dust considered unsafe for children is equal to a small packet of sweetener sprinkled over one-third of a football field, according to the Environmental Protection Agency. Hence, it only takes the amount of a few grains every day for a child to become severely lead poisoned, Lane said.

New York state requires all children be tested for lead exposure when they are 1 and 2 years of age, according to New York State Department of Health. As of now, after a child visits the doctor and comes back with elevated blood lead levels, officials then go to the house, find the source of the lead and deal with the problem, said Common Councilor Joe Driscoll.

Jamie Howley, South Side resident and co-chair of the Housing Task Force, finds the current public health policy to be insufficient.

“It’s terrible because we’re only finding out that there is lead in a housing unit after the children have already been poisoned,” Howley said. “We’re using them like canaries in the mineshaft.”

New York state has declared blood lead levels of 5 or more micrograms per deciliter to be unsafe. In 2018, 10.4% of children tested for lead exposure had elevated blood lead levels, according to the Onondaga County Health Department.

“Even very low levels, at 5 micrograms per deciliter, can cause harm,” Lane said. “There’s no sort of stable level of lead in the body.”

Once it’s in the body, lead is absorbed, including into blood, bones, muscles and skin, Hobart said. Therefore, there’s no medicine that can completely rid the body, Hobart further explained, noting that the most important step in treating lead poisoning is removing the source of contamination. “The main treatment that we do is try to get the lead out of the environment or get the child to move to a different place,” he said.

Some experts claim that childhood lead exposure may trigger the development of a drug, tobacco or alcohol addiction, depression, anxiety, obsessive-compulsive disorder, mania and schizophrenia.

Based off her own research and others, Lane has identified many problems related to lead poisoning and its effects on the brain, including increased need for special education and decreased school attendance.

Lead exposure has also been linked to juvenile delinquent cases, Lane said. “Kids who have behavioral difficulties, like risk taking, don’t learn from their mistakes and are more likely to be arrested,” she said. Lane also explained how children’s IQ levels are negatively affected by lead poisoning. “For every 10 micrograms per deciliter increase in blood lead level, children’s IQ was found to be lower by four to seven points,” she said, noting that only 20% of third-grade students read at grade proficiency, according to the Syracuse Central School District 2018 report card.

Hobart explained that children who have elevated blood lead levels might not develop in the same way a typical child would. He noted that lead poisoning causes long-term, irreversible effects on children’s ability to learn, pay attention, be independent, stay organized and follow simple directions.

That said, Driscoll does expect some push back from landlords. When looking at Rochester and Toledo, Ohio as examples of cities that proposed similar legislation, they saw that landlords had organized large scale lawsuits against the cities. “This is a community problem and we want to be a partner with them,” he said. “We’re not here to just give them more regulations and burdens.”

Overall, the ordinance would be a huge step in protecting children from lead poisoning, said Howley. “It has to be done because it can’t continue the way it is now,” she said. “Children are invaluable. You can’t put a cost on a child’s future.”

Ashley Kang is the director of The Stand newspaper