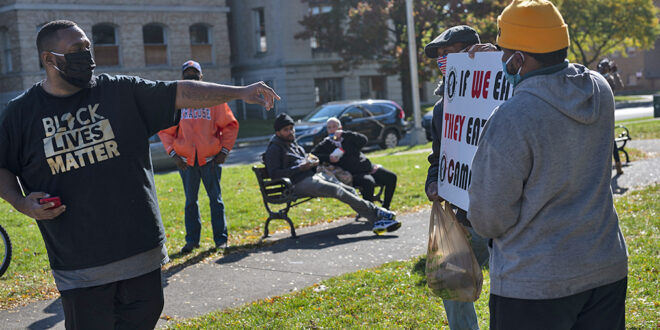 A Story Worth Telling

Muhammad moved to Syracuse five years ago and soon launched We Rise Above the Streets. The organization coordinates efforts to feed people experiencing homeless through weekly outreach events known as Sandwich Saturdays.

Growing up in Chicago, Muhammad was involved in gang and street violence. He even struggled with homelessness when he lived on the streets of Atlanta. It took being incarcerated for him to take control of his life, find a higher power and convert to Islam. From there, he knew he couldn’t go back to his old ways.

He worked to turn his life around and help others in need by volunteering and giving back.

We Rise Above the Streets started small with Muhammad distributing sandwiches to those in need out of the trunk of his car. A core crew of 15 volunteers quickly grew to 25 then doubled. Five years later, nearly 600 volunteers have given their time to support Muhammad’s cause.

“Seeing him go out to support and listen to people in need was very powerful,” Rahim said. “Al-amin continues to bring his full self and unwavering commitment to the work of service to people experiencing homelessness in our community.”

Muhammad’s real life redemption story is retold in his soon-to-be-released autobiographical book “My Purpose of Life: One Man’s Tale Inspires a Wave of Humanity.”

He says he’s been on “pins and needles” waiting for final edits and book cover choices to be made so he can soon work to have it published.

“It talks about never giving up,” he said in describing his book. “No matter what you go through — you should continue to fight and strive for greatness.”

Ben Walsh, mayor of Syracuse, met Muhammad in 2017 during his campaign. Since then the two have developed a friendship. Walsh believes Muhammad’s story is compelling and worth telling.

He pointed out that Muhammad has been very open about his past struggles and can relate to the people he’s serving.

“We are lucky in this community that we have many people supporting others,” Walsh said. “Through his personal experience, he brings a special element that makes us stronger to help people in need.”

Muhammad started writing down his experiences, thoughts and feelings while he experienced homelessness living in Atlanta. He often visited the library during that time and a young lady there would help him type up his notes and save them into the computer.

When the pandemic hit, Muhammad had to reduce his community involvement — no public speaking or community outreach events.

Instead, he spent considerably more time alone. In the solitude, he revisited the idea of turning his notes into a book.

“One morning I woke up and my first thought was to finish the book,” he said.

For the past three months, he wrote day and night.

The book shares his experiences of hurt and pain, drug use and gang violence, but also of happiness and achievement.

“There will be a lot within the book people will be shocked by,” he said. “But it also shows that it’s never too late. There’s always hope.”

Upon completing the book and finishing the final edits with his ghostwriter over Zoom, Muhammad says he was brought to tears. Knowing he had finally completed his story — he felt totally overwhelmed.

“This is one of the top and most wonderful things I’ve ever done in my life,” he said.

He hopes readers are left with one takeaway: “Never give up on your family members or on yourself, especially those who are suffering through alcohol and drug addiction.”

In times when people are struggling, he stressed there needs to be “less talk and more listening.”