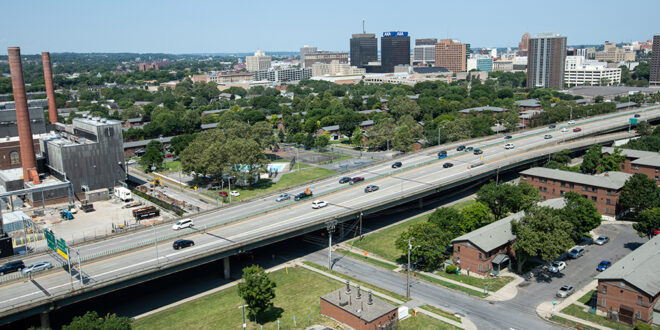 A view of the I-81 viaduct from Toomey Abbott Towers. Gov. Andrew Cuomo announced reconstruction of this aging highway’s viaduct will begin in 2022 with plans released later this summer. | Jenn Grzyvinsky

After nearly a decade of discussion on what to do with the aging Interstate-81 viaduct, a new hope comes to the city of Syracuse after President Joe Biden announced his $2 trillion American Jobs Plan.

Mayor Ben Walsh expressed excitement for Biden singling out Syracuse and I-81 as an example of a transportation project that could rebuild communities.

“President Biden’s vision bodes well for Syracuse,” Walsh said. “(Investing) $20 billion for a new program to reconnect neighborhoods, increase opportunity and advance racial equity and environmental justice can be a game-changer for this community and can help us realize the full potential of this project.”

This reconstruction project will update the existing outdated portion of the interstate, and with support from Biden’s American Jobs Plan, now seems closer to a long-fought push to include local hiring for the near $2 billion construction cost.

The Urban Jobs Task Force (UJTF), the coalition that has been in the trenches since the beginning of conversations on whether locals would work on the federally funded project, expressed optimism about the support it has seen recently.

“I am hopeful not based on the number of players that are involved in this kind of conversation or effort to maximize local hire, but about the type of players,” said Deka Dancil, UJTF president. “I will say it still is too early to tell if we are going to end up coming out with this beautiful cake we want to have.”

This newfound energy started after Pete Buttigieg was nominated Secretary of U.S. Department of Transportation. Walsh reached out after the former South Bend Mayor tweeted:

“This is especially true here in Syracuse because our city is scarred by I-81, a raised highway viaduct constructed in the 1950s and ’60s through the heart of a predominantly Black neighborhood,” Walsh said in his letter to Buttigieg. “For decades, it has marginalized people living in the neighborhood and jeopardized their health, at the same time that it contributed to the decline of our center city.”

Last year, Gov. Andrew Cuomo supported New York State Department of Transportation’s recommendation on a street-level “community grid.” Walsh expressed that a community grid will be “transformational for the city of Syracuse and the Central New York region.”

“It also gives us the opportunity to right some wrongs that were inflicted on people of color over generations,” he added. “It is my hope that under your leadership as transportation secretary, the Interstate 81 in Syracuse can be expedited, and existing federal barriers to foster local hiring on such projects can be removed as soon as possible.”

Cuomo announced during his State of the State address this year, a $306 billion infrastructure plan includes finishing the I-81 viaduct replacement project. In the address to the state, Cuomo called the highway “obsolete” and “poorly designed.”

Cuomo expects to break ground in 2022. He recently announced the reconstruction project will be allotted $800 million in the New York budget and construction plans will be released later this summer.

“It has seemed a long time away up until recently, and all of a sudden, we’re looking at 2022 as the anticipated start date,” Walsh said. “It’s right around the corner, and there’s no time to waste.”

In a national press conference hosted by Jobs to Move America in March, Walsh expressed his optimism about the meeting with Buttigieg’s team.

“I came away feeling very good that our values and priorities are strongly aligned,” Walsh said. “It’s just another reason we’re so excited for what’s ahead working with the Biden/Harris administration.”

The conference was called for Jobs to Move America to share its report on the Local Labor Hiring Pilot Program, which was created by the Obama Administration in 2015. The program allowed for selected agencies receiving federal grant money through the Federal Highway Administration or the Federal Transit Administration to be permitted to include local hire provisions in their requests for proposals for construction projects.

The program was canceled by the Trump administration in 2017 before the data for initial pilots could be analyzed. Jobs to Move America’s report found that including local hire provisions does not reduce the number of bidders, nor does it have any systematic impact on bid price.

As it stands, there has been a ban on local hiring for federally funded projects for over 30 years, dating back to the Reagan era.

One attempt to implement local hiring for the I-81 viaduct reconstruction project includes the creation of the “Big Table,” which consists of representatives from federal, state and local government; business, and organized labor and community stakeholders.

“If the ban on local hiring weren’t in place, we’d have no need for such extreme and really, nearly impossible measures,” said Dancil, who also spoke during the national press conference along with six other leaders from across the nation. “If the I-81 viaduct project, or any other infrastructure project that had federal dollars tied to it, were to start tomorrow, very few Syracuse residents will be able to work on it.”

Among the organizations with a seat at the “Big Table” is the Central New York chapter of the Coalition of Black Trade Unionists (CNY-CBTU), which had officially been revived January 2021. King Davis, president of CNY-CBTU and Civil Service Employee Association retiree, said one of the reasons he wanted to become involved with the coalition was because of the I-81 viaduct reconstruction project.

After nearly a decade since its introduction, the project soon gained the attention of Sen. Kirsten Gillibrand. Gillibrand approached UJTF to help introduce her Build Local, Hire Local Act back in 2019. The bill demands 50% of construction jobs be reserved for local hires in a five-year period.

“I am committed to working with the current administration to invest in New York state infrastructure and address systemic racism in our highway system,” Gillibrand said. “The Build Local, Hire Local Act was inspired by the legacy of I-81 in Syracuse.”

Gillibrand was the first federally elected official to be actively involved in Syracuse’s I-81 issue and endorsed the community grid replacement option in 2018.

“I thought that was really cool that she came to Syracuse,” Dancil said. “And thought that our research was important enough … good enough to back her bill.”

With the start of a new congress this year, the bill remains in limbo.

“We are trying to use Syracuse Build as the conduit for a pathways to apprenticeship program in partnership with local labor,” said Walsh, noting the effort is being led by Common Council President Helen Hudson. “It’s through this work, that we hope to break down some of those barriers … and get people in that pipeline so they can get to work when the work is here.”

The program’s first cohort launched last year, but was cut short due to the pandemic.

Both Dancil and Davis expressed a recent decline in their membership meetings due to the pandemic, which has also caused meetings to move online, using mediums like Zoom.

“COVID has changed everything,” Davis said. “We are trying to find different ways to communicate with people. Even if it means holding Zoom meetings for training and (community outreach).”

Although UJTF wants to be prepared for when the time comes, Dancil expressed concern on rushing to train people for jobs that aren’t guaranteed because of the local hiring ban.

“We have a two-prong problem,” Dancil said. “One, we’re underskilled. We need to upskill the community and get them ready for the project. Two, there’s barriers that will make it hard for them to even be required to be on the project.”

The next “Big Table” meeting is set for this spring. Some people like Davis don’t expect much of a decision to be made on local hiring for the I-81 viaduct reconstruction project.

“A couple of us even said ‘Are we even going to be alive to see this project end?’” Davis said. “While I’m not expecting too much from them — training and getting everything ready so that when a decision is made, we’re ready for it.”

“Our hopes have been raised and dashed on the rocks so many times. We just don’t believe anymore,” said Theardis Martino, a former UJTF member and former executive director for L&M Training Center Inc. “And that’s the true complexion. That’s why you can’t put 30 people together. They don’t want to hear nothing you got to say, because they know the crab in the basket syndrome.” This syndrome refers to when numerous crabs are together in a basket and one attempts to get out, the others pull it back down.

According to the Racial Equity Impact Statement (REIS), a report UJTF created in partnership with Legal Services of Central New York, white workers are 21 times more likely to hold a construction job than minorities. Marcus Hunter, a South Side native, was fortunate to find someone to point him in the right direction for a job in construction. Still many with his complexion aren’t as lucky.

To Hunter, just by reading his name, many wouldn’t assume he is Black.

“Sometimes I feel the way my name looks, I get an interview opportunity. But, when my face shows up, people are like ‘Oh, he’s not what I expected,’” Hunter said.

Coming out of the BOCES Construction Trades program, Hunter became well knowledgeable about the trades and was ready to start his internship with Syracuse Housing Authority. There, he would be supervised by Jermaine Hackett.

Pioneer Homes maintenance supervisor Jermaine Hackett, a fellow BOCES graduate and family friend to Hunter, praised the program for its training and mentorship.

Not many have over $8,000 to spend on tuition, but Hackett feels Hunter is a prime example of why programs like BOCES and Syracuse Build are needed.

“If you provide the right resources and energy, you can change somebody’s life,” Hackett said. “And they’ll have an understanding. It’s not just a job. It’s a lifestyle. It gives you so many options. You have potential to do whatever you want.”