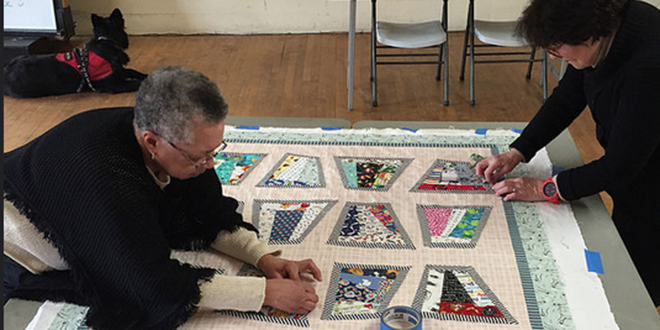 A Piece of Black History

The Sankofa Piecemakers take pieces of fabric that most people would discard or overlook and sew them together, making a one of a kind masterpiece: a quilt.

This coming Valentine’s Day, as part of the Syracuse Beauchamp Branch Library’s Black History Month celebration, the quilting guild will demonstrate the basics of quilt making, a craft closely knit with Black history. 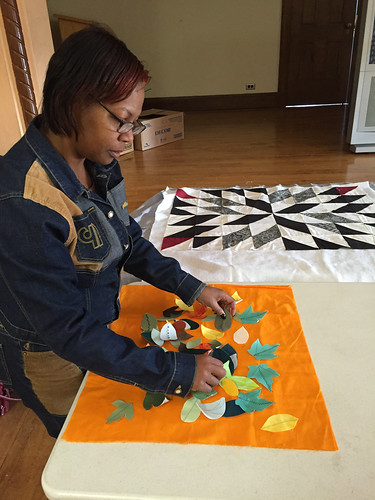 Deborah Menifee lays out the leaves that will go on her Family Tree quilt. The finished product will be revealed at her family reunion.

The tradition of African-American quilting is nearly as old as the history of America. During the years of widespread slavery, skilled slaves were tasked with making quilts for their owners, and out of necessity, for themselves. The projects that did not go to their owners were used to keep themselves and their families warm, or sold for profit.

“African Americans have been quilting for years,” said Dotti White, a member of the Piecemakers. “Slaves would use things like seed sacs and old clothes as fabrics.”

This resourcefulness has not been lost with the Piecemakers. Since joining the quilting guild in 2003, White said that she has seen many women come to the quilting group with creative ways to make use of various throwaway materials.

“I remember one woman made this beautiful quilt out of her husband’s old shirts,” White said. She also recounted seeing women make quilts out of men’s old ties, worn out denim and outdated clothing.

The art of quilting often involves some sort of meaning. The fabrics used can serve as a scrapbook. The pattern followed by the quilter can be symbolic. Quilts can preserve their maker’s memory.

“My mother used to quilt when I was younger,” White said. “She made me a quilt for when I went away to college. My mother has passed on to the great beyond, but I still have that quilt and I thoroughly love it and enjoy it. It’s beautiful.”

The Sankofa Piecemakers have taken on many community tasks in an attempt to give others an experience like White’s mother gave to her. 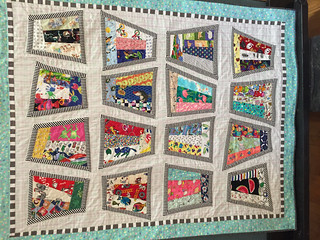 A finished quilt that Barbara Conte-Gaugel made as a gift for her family members.

“In the past, we have made quilts and raffled them off,” said Barbara Conte-Gaugel, another member of the guild. “We raffled off a quilt not too long ago and donated the proceeds to [Beauchamp Branch Library]. We almost always have a community project going on.”

Conte-Gaugel said the Piecemakers have also donated quilts to the Barnabus House, which provides transitional housing for teenagers and young adults, and baby caps to local hospitals, but this is only a glimpse of the guild’s community involvement.

The idea of using quilting to give back to the community dates back to 1861, when the Civil War broke out.

“Black people used to make quilts for the soldiers fighting in the [Civil] War,” recounted White.

Since women were unable to participate in the war effort at this time, quilting was used as a way for them to rally behind the cause.

Despite the African origins of the name the Sankofa Piecemakers, people of all ages and ethnicities comprise the guild.

Not only are the Piecemakers artists, they serve the community, but most importantly, they are friends.

In the words of Conte-Gaugel, “At some point along the road, the group went from just a group of quilters to a group of friends.”

If you go:
What: “Rendez-vous with Sankofa Piece Makers”
When: From noon to 1 p.m. Saturday, Feb. 14
Where: Beauchamp Branch Library, 2111 S. Salina St.
Detials: Members of the Sankofa Piece Makers quilting group will demonstrate the basics of quilt making

The Piecemakers hold weekly meeting
When: 9:30 a.m. to noon Saturdays
Where: Beauchamp Branch Library
Details: People of all ages, ethnicities and skill levels are welcome