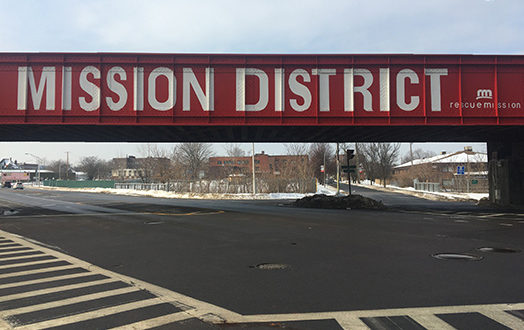 Business owners in the West Onondaga neighborhood want to repaint the bridge that separates the community from Downtown Syracuse to create a more welcoming first impression. | Connor Fogel, Staff Photo

When Kim and Paul Vinciguerra looked at the West Onondaga community as the place to move their printing business, Kim was unsure of the area, worried her customers would feel put off by the hard-bitten appearance of the neighborhood.

Now, four years later, Vinciguerra said she is proud to see how much the community has improved. Customers of her business, Upstate Printing Inc., have noticed, too, she said.

The neighborhood plans to launch a re-branding effort, complete with a new name, this summer.

Upstate Printing, a block from the intersection of Midland Avenue and West Onondaga Street, is among several businesses that have joined the West Onondaga Street Alliance, or WOSA, a merchants’ association that focuses on improving the neighborhood’s historical value while also combating crime.

“We really want to just give back into this neighborhood. I want my customers to come back and feel safe,” Vinciguerra said. “Just in the four years since we’ve started looking at the property to today, what a huge difference, and it’s just exciting to see it grow and get better and better.” 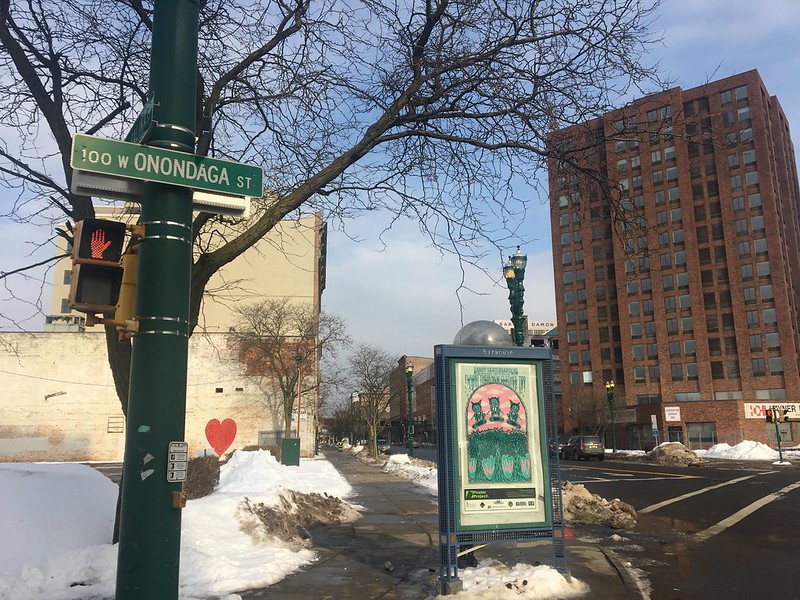 The West Onondaga Street Alliance also wants to clean up the neighborhood and plant flowers.

Community members initially launched the alliance back in 1990. But their good intentions eventually faded. A decade back, the organization ran aground, as members lost interest or retired from their work. Then, three years ago, Robert Bucklin and some neighbors who own local businesses stepped in to revitalize the group.

Bucklin, the current president of WOSA, and other members are working to rebrand the neighborhood, with the help of two local businesses: Eric Mower + Associates and Coley Advertising.

The group’s first large project is the repainting of the bridge located between the West Onondaga community and Downtown Syracuse. Bucklin said the bridge, which now reads “Mission District,” puts a negative connotation on a city full of history and life. But with the help of new businesses and its long-lasting diversity and history, Bucklin said the city and its neighbors have already noticed the changes made in the past few years.

“With all the interest of the other side of the bridge, the east side, they are starting to look here now because there is nowhere else to go in the city,” Bucklin said. “We want to be able to greet them and say, ‘Hey, come on in,’ and we’ve gotten a good response. They’ve looked, and they see that we’re willing to take the step into there to combat the crime, make it look nice.”

Bucklin said local businesses want to work with WOSA and have joined in the neighborhood’s improvements by participating in its smaller projects such as cleaning up on Earth Day, planting 5,000 tulips along the street and organizing a neighborhood watch program.

Jamie-Lou McKinney works as an attorney at the law office and is one of WOSA’s re-founders. McKinney will soon open a new restaurant in the neighborhood called Joe’s To Go, and she said that just like a community on the rise needs a coffee shop, it also needs a new place to eat.

“You get choices by opening the restaurant in conjunction with all the great things that are happening,” McKinney said. “I just think that it shows it is a neighborhood on the upswing.”

She added that more than 1,000 people work within a quarter-mile radius of the law office, Tim Wentworth owns the only building coop in the neighborhood, located at 377 W. Onondaga St. Wentworth said it has 28 units filled with attorneys, a psychologist, teachers and nurses who all moved to Syracuse from out of state.

Wentworth said one of his residents told him that he moved to the neighborhood because of the Salt City Coffee shop, located at 509 West Onondaga St., saying that when a coffee shop comes into an area, the community is on the rise.

“I used to tell people that the streets were so bad that even the bad people left,” said Wentworth, who has lived in the area for 28 years and raised his family there.

Bucklin has lived in the West Onondaga neighborhood for 26 years, and he has gone door to door to get his neighbors involved in WOSA’s mission and motivate people who might not think it’s possible to change their community alone.

“When you look at what the six or 10 of us have done in the last two and a half years,” Bucklin said, “it’s pretty amazing just by having a little group.”