A Matter of Perception

Tyquan Cannon and his brother, Tyrell, say they were walking from their YouthBuild orientation — their books under their arms — when they found themselves thrown against the side of a car by two detectives from the Syracuse Police Department.

“Personally, I think it was rude and disrespectful,” said Tyquan Cannon, 21. “We told them where we came from, and I had my books and stuff in my hand so it wasn’t like we was just sitting on the corner selling something.”

The two detectives asked the Cannon brothers whether warrants had been issued for their arrest, and finally let them go after calling in to confirm the brothers’ records were clean.

“People think that the police don’t racial profile? Tell them to put a hoodie on and come down in the neighborhood. I guarantee they’ll get stopped,” said Tyrell Cannon, 23. 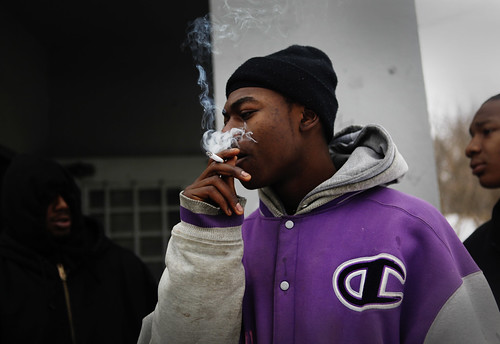 The two brothers shared their story at a YouthBuild meeting Dec. 10. The Cannons join a group of 29 young black men and women between the ages of 16 and 24 at the Sidney Johnson Vocational Center on East Genesee Street every Friday morning to talk about their lives, their struggles, and how to become successful. YouthBuild is a program run by Jubilee Homes; it provides at-risk people with the opportunity to earn a GED while learning a trade skill, such as construction.

All 29 come to the program under challenging circumstances — a history of drugs, violence or unstable homes — but are determined to change their lives. However, the past can’t be erased, they said, especially with the police. They are familiar with the police who patrol the South Side, even though many of the group members do not have criminal records.

“The police feel that everybody in that neighborhood is a thug,” said Jahlmiria Jones, 20.

Most of the YouthBuild members said they had been stopped at least once, and a few reported extensive experience with the police, even noting which officers were the “meanest” and “out to get you,” and which ones were fair.

“It’s not only the regular cops, it’s the detectives that will get you. The ones that are unmarked and undercover, they’re looking to put somebody in jail. If you’re white, they leave you alone. If you’re black, they ask where you can get a gun and drugs,” Jones said.

In November, the results of two studies on racial profiling were released; researchers said neither confirmed or ruled out racial profiling in Syracuse. Still, one study did say African-Americans were more than twice as likely to be stopped by police as white individuals.

Racial profiling, officials and residents alike say, seems to be as much a matter of perception and personal experience.

South Side residents, community organizers and the police department say that in light of recent shootings, concerns about police behavior have been eclipsed by a need to stem the violence. There were more than 225 shootings between January 2010 and mid-December of last year alone, including the death of 20-month-old Rashaad Walker Jr., a toddler killed during a street shooting in November.

While several YouthBuild members told stories of police stopping them because of their race or their appearance, others said the police were just doing their jobs.

Derrick Thomas, the class president of YouthBuild, said he feels the police do target people who are black, but not just because of that.

“It’s more your appearance and how you carry yourself in the streets,” he said. “If you look like you’re getting ready to cause trouble, that’s when the police judge you. Black people are dominant in the violence on the streets. It’s not like it takes a rocket scientist to figure out that it’s more black people who are doing the crime.”

Thomas, 22, grew up with his grandmother until she died when he was 16. He had more leadership and discipline at home than many kids on the streets. He went to Faith Heritage High School, a private school, until he was a junior, but then transferred to Corcoran High School when he moved into his father’s house and financing private school became impossible. With a less challenging workload, less discipline, and surrounded by his childhood friends who grew up with him on the South Side, Thomas said he began to lose focus and started smoking weed. He dropped out of high school.

“I was a knucklehead,” he said. “I never got fully in the gang thing, but I stopped caring about what was important.”

Based on his experience on the street, he said racial profiling does happen but only with certain officers. He said a bigger issue is the rise in crime in his neighborhood.

“It used to be cool in the streets, but now there’s nothing out there. … If you just look at somebody wrong, they’re ready to shoot you. Every kid now, they all feel the same, and some of them only get involved in the streets because they want to be cool or have this fame.”

However, the rise in crime confuses Thomas.

“When I was out there in the streets, it was easier to do stuff. Now, the police are everywhere. I don’t understand how more and more things are going on. Now somebody gets shot and the police are out here, but it’s like they don’t care.”

“That baby (Rashaad Walker Jr.) was shot right outside my house,” he said, pointing out the window. “That could have been one of my kids.” 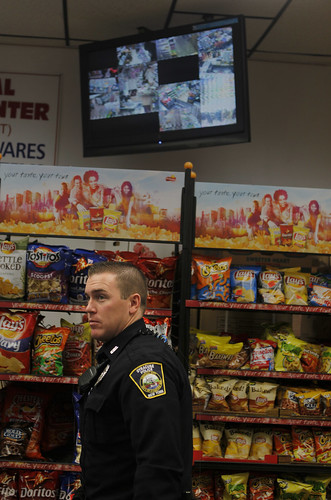 > Police officer is called to deal with troublesome customer at a local corner store. -- Mackenzie Reiss

The day after the Dec. 10 YouthBuild meeting, Tyquan Cannon left his house in the afternoon and headed around the corner to Midland Discount Market on Midland Avenue, or as the South Side residents call it, the “Hood Store,” a corner convenience store.

“This block is hot,” Cannon said. “The police say that a block is ‘hot’ when you got groups of guys hanging out on the corners like that one up there,” he said, indicating a group of black youths tossing snowballs at each other outside the “Hood Store.”

Loitering outside the store, a group of 10 or more young black men looked up and greeted Cannon with shouts of “What’s up, brother?” and “What you doing, man?”

“I know most everybody around here,” Cannon said.

A lifelong resident of Syracuse’s South Side, Cannon “ran the streets” until a gun was pulled on him. He was not shot, but he said the scare inspired him to get off the streets and earn his GED. He applied for YouthBuild but was rejected; he was accepted the second time. “I was one of those ones that just kept on fighting,” he said.

As he approached the group hanging out by the store, he said such groups are what make the police suspicious.

One young man in the group, referring to himself as “Fizz,” said he “hated the police.” He recently moved from Flint, Mich., to Syracuse, and he said the crime and the police’s behavior was much worse on the streets of Syracuse than in Michigan. “They profile too much. If you’re wearing certain clothes, they’re going to be stopping you for certain. I know we come off rough, but we got it hard. Nobody out here got it sweet. We got nowhere to live, nowhere to be. I slept in the park last night.”

A fellow member of the group chimed in.

“Yeah, I think they (the police) call us, what was it? Oh, a ‘menace to society,’” said Rick Chandler, a resident of the South Side.

Inside the store, the shop owner glanced outside nervously at the large group of young men blocking the door. Ali Magid Saleh, the owner, opened the discount store in 2002 after leaving his home country of Yemen for the United States in 1995. He lives on the South Side but says he didn’t realize it was “a rough neighborhood.”

“They make everybody nervous,” he said, gesturing to the group laughing and smoking cigarettes outside his door. “They’re selling all kinds of drugs. They break into many cars in the parking lot. Anybody that is not from the hood, they rob them. I call the police many times.”

Police Chief Frank Fowler said he deploys police by the data. If a neighborhood has a high crime rate, he sends more officers, regardless of its racial demographic. In the first six months of 2010, 91 percent of shooting suspects and 63 percent of assault suspects were black.

John Robertson, who has worked in various retail stores on the South Side for 20 years, said there is no shortage of police officers, but they are impeded by residents who won’t cooperate when crimes occur. Robertson calls the police to deal with troublesome customers at the store where he works on the South Side.

“The police have a very tough time. No one around here trusts the police,” Robertson said.

Robertson grew up in the suburbs of Syracuse. He lived on the South Side for nine years before moving back to the suburbs eight months ago.

“In the years I’ve lived here, things are not getting better, they’re getting worse. The police are getting blamed for it but they are doing an overwhelming job.”

Gary Bulinski, a sergeant with the anti-crime section in the Syracuse Police Department, said he does not expect youth living on the South Side to fully understand how the police work. 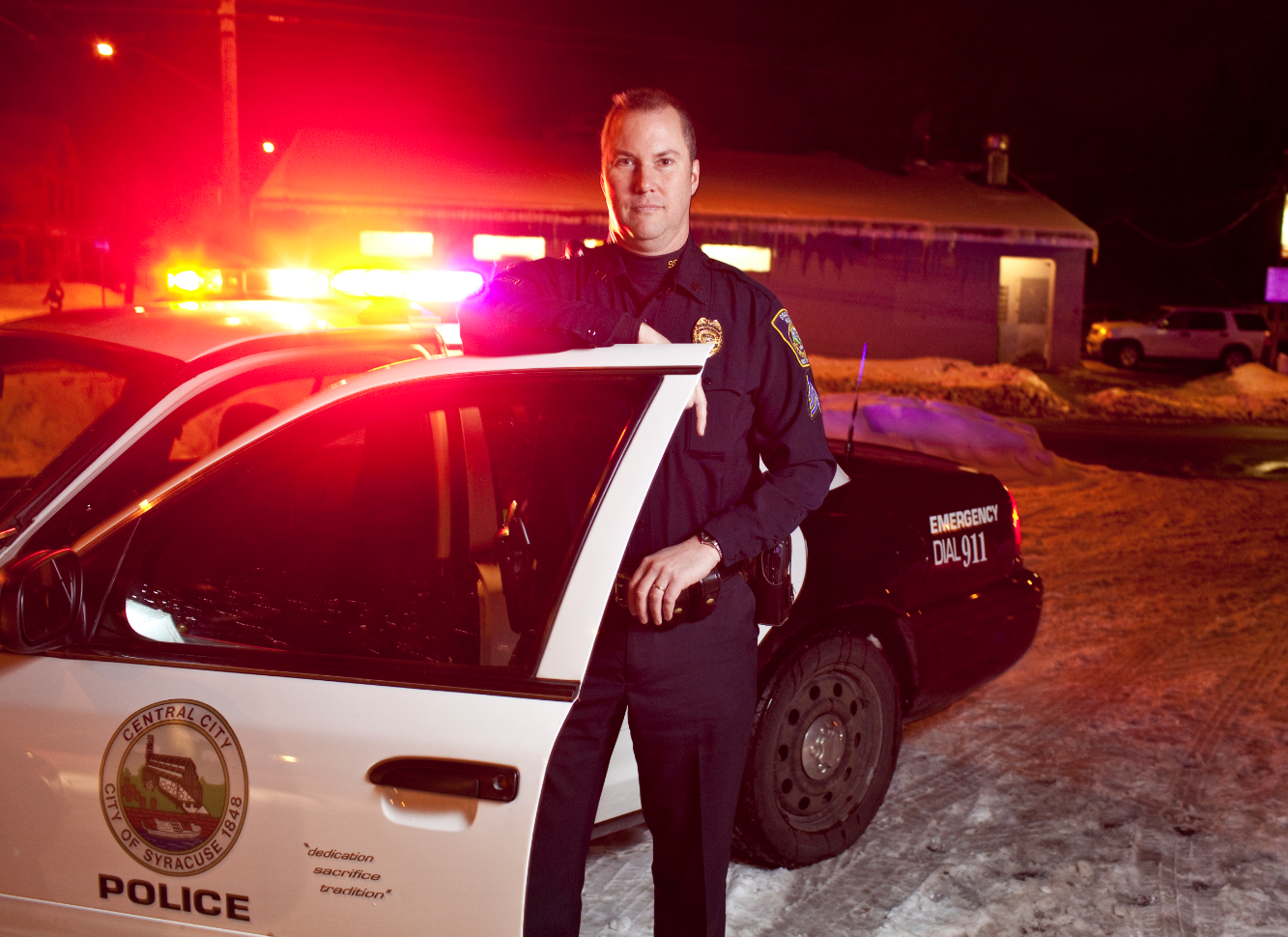 In response to complaints that police officers stop individuals based on what they are wearing, their race, or simply because they “fit a certain description,” Bulinski said  officers do stop residents walking the streets when police are investigating a crime.

Members of YouthBuild said that being black, wearing a hooded sweatshirt and blue jeans increased the possibility of being stopped. Bulinski acknowledged that if individuals meet the description of a suspect, officers will stop them and question them, even in the absence of criminal activity.

Bulinski said cooperation from the community is key in reducing crime. “I’m not sure what else we can do except what’s already been done. The community can approach us, and we do have more citizens cooperating and letting us know what’s going on in the neighborhood. We’re hoping that continues to grow,” he said.

“The only ones who should fear us are the ones committing crime.”