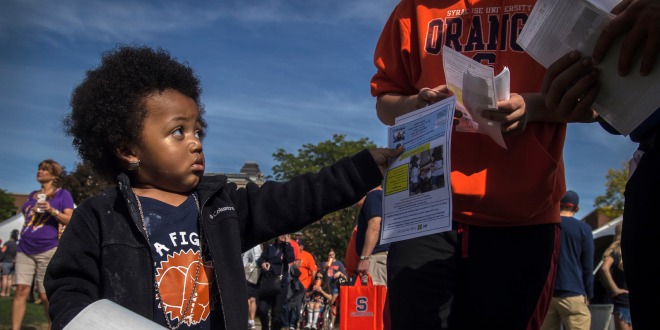 A Match for a King 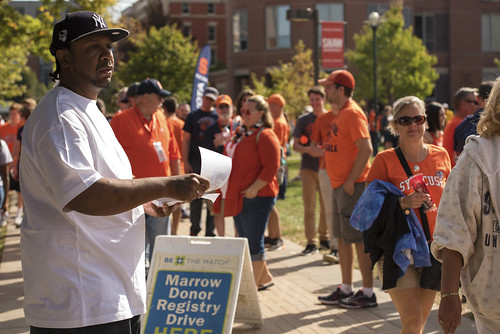 The tent, the clipboards and the swabs on the Syracuse University quad were all for the 2-year-old boy with an Afro and a black Columbia jacket, blue jeans and blue boots to shield him from the elements.

One man called out “Baby King” as the toddler arrived at the tent.

Named King Nazir Leon, he has a CD40 Ligand deficiency, a hereditary immune disease that can be fatal without a bone marrow transplant. King’s best hope for a future is to find a bone marrow match, but only 7 percent of people on the bone marrow registry are African-American. Race is a key factor in determining a match.

Local people, including aspiring rappers and SU athletes, have rallied around King. Denisha DeLee, his mother, and other helpers turned out Sept. 26 for a bone marrow drive on the quad at Syracuse University before SU played Louisiana State University.

“His grandmother reached out to them and started doing a drive,” DeLee said of the William G. Pomeroy Foundation, an organization that supports programs related to blood cancers. “Since July 11th, she’s been doing drives. Every chance we get, we do a drive.”

Both of DeLee’s brothers had CD40. One died when he was 4 years old and the other when he was 18 years old. By then he was using a wheelchair because he had lost his ability to walk. 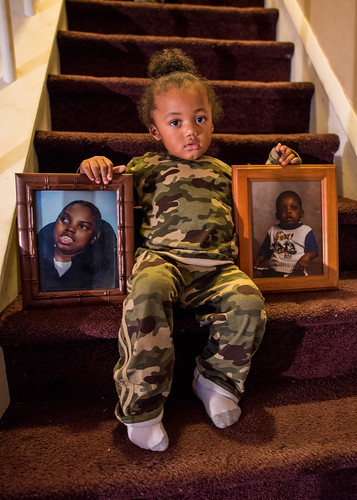 King Nazir Leon, 2, sits between portraits of his two uncles, Dayvon and Daqwan DeLee, who passed away from complications of a CD40 Ligand deficiency. It is a hereditary immune disease that King also inherited. | Photo by Leonard Adams

DeLee knew her son would have a 50-50 chance of being born with the disease. Doctors told her so.

From an early age, King has been a regular visitor to Upstate Golisano Children’s Hospital for treatments. Sometimes he will get sick and his immune system can’t fight back like that of a healthy person. Even taking him to an event like an SU football game is a risk because of the sheer number of people who could have an illness as simple as the common cold, his mother said.

At one point King caught pneumonia and spent two months in the hospital, hooked up to a breathing tube.

“There are days that I don’t want to go to work because he’s so sick,” DeLee said. “He’s constantly sick … it’s very, very hard.”

If DeLee gets sick, she stays in a separate room in the house, and King’s grandmother takes care of him to make sure no germs spread. DeLee also has two daughters she must provide for as a single mother.

Doctors told DeLee the best way to find a match would be to have another child, but she said she doesn’t want to put herself or another baby through what King faces right now. 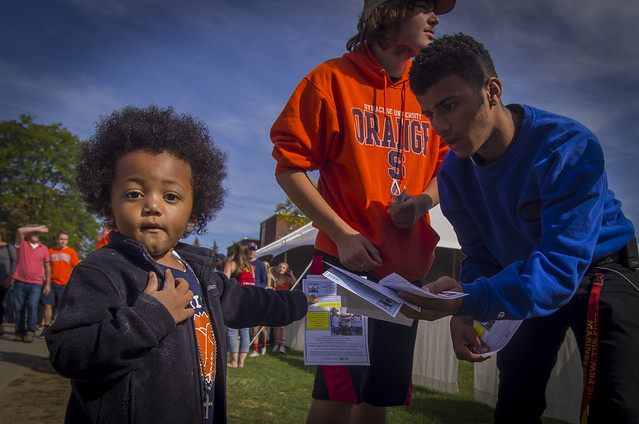 At the bone marrow drive, a few people stopped at the tent to join the bone marrow registry and have their cheeks swabbed — first the top left of their cheek and then typically counter clockwise, with the swabs changed for each corner of the mouth. After swabbing for cheek cells, the swabs are put in a packet and sealed.

“Thirty-eight thousand-to-one are the odds of a match,” a volunteer told people who became part of the Bone Marrow registry. It’s the way nearly every conversation at the table ended.

A volunteer explained that only people ages 18 to 44 could join the registry because after the cutoff age, it becomes more dangerous to the donor’s health to give bone marrow. People who become part of the registry typically are contacted only if a match is found.

On the quad at SU, 15-year-old rapper Mahkai Bailey and his father, Freedom Allah-Bey handed out fliers to get people to stop and register. They first met King at a performance at the Elks Lodge on South Salina Street. A few days later, at 1:30 a.m., Bailey walked into his father’s room and told Allah-Bey he wanted to write a song about King.

“He felt a connection with the kid. He said, ‘Dad that could be me,’” Allah-Bey recalled.

Bailey, who raps under the name “Truth Speaker,” performed the song when he opened up for Nas at the Great New York State Fair in late August.

“It hit me down deep inside,” Bailey said.

As the clock crept toward noon, Scoop Jardine, a popular former SU basketball player, showed up at the tent. He has a 2-year-old son, too, and committed to coming when he heard about King two weeks earlier. 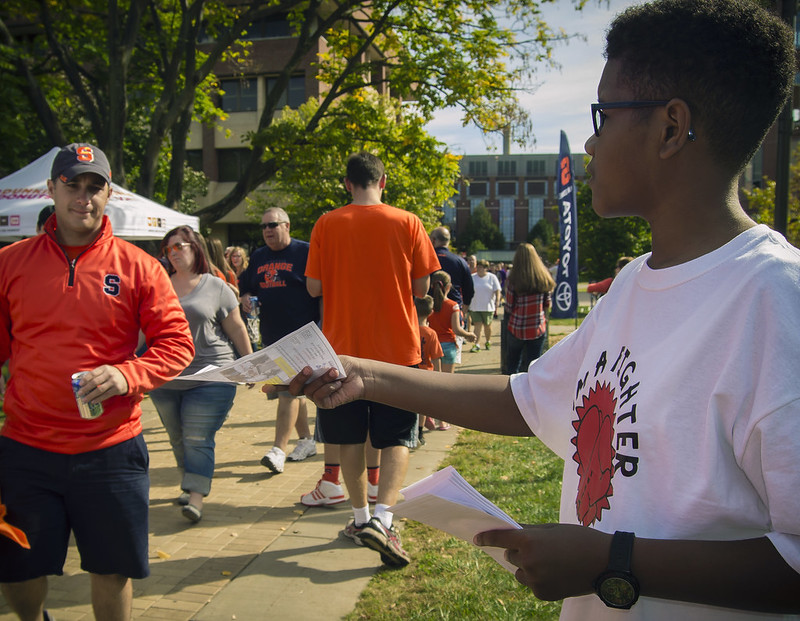 Jardine graduated from SU with one of King’s relatives. The family helped take care of Jardine when he played at SU. Even when the former guard traveled overseas, the family sent him care packages.

“It’s only right for me to give back and try to help them,” Jardine said.

DeLee knows that it’s rare to find a match. Neither of King’s sisters is a match. She and the baby’s father are just a partial match.

But even with the somber data, DeLee looks forward to these drives, which help sustain her hope that someone out there can save her son.

“They give me faith, because there’s days I want to give up,” DeLee said of the drives. “So these events keep me going.” 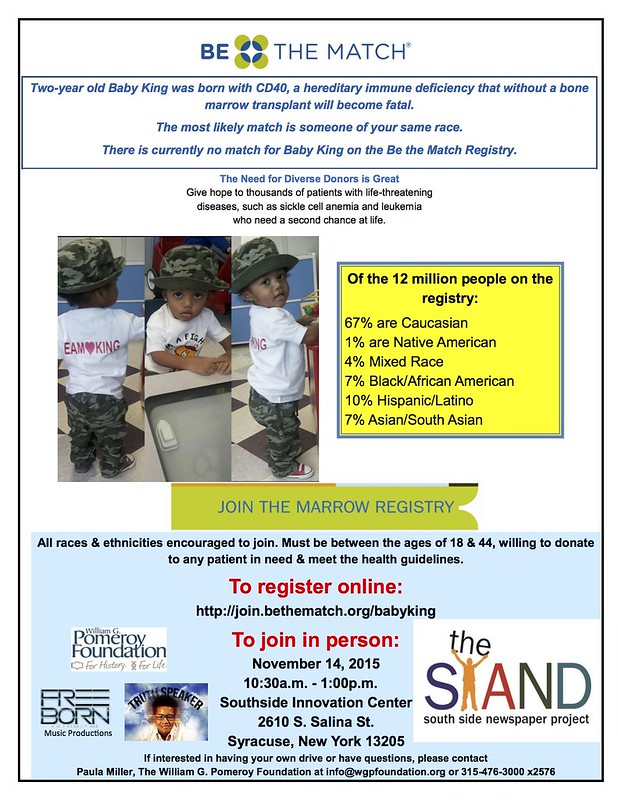