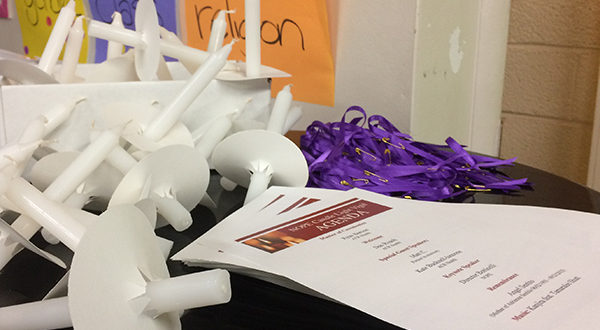 Candles and ribbons were offered at the vigil in memory of those who died from drug overdoses.

Twenty-five people pressed themselves against the walls of a dimly lit storefront downtown, attending a vigil to mourn those who recently died from heroin and opioid overdoses. Ryan Barone, who works for the nonprofit ACR Health, set the mood — sad but still hopeful.

The event, the Syracuse NOPE Candle Light Vigil, took place at the end of October. Attendees gathered at the Q Center, 617 W. Genesee St., in a room with multicolored walls and upbeat LGBTQ flags and signs.

The vigil was one of hundreds held across the country with the assistance of the national NOPE Task Force, or Narcotics Overdose Prevention & Education.

As opiate addiction has become a sweeping national issue, the problem grows in Onondaga County.

“There were 50 unintentional deaths from overdose from the years 2009 to 2013 in Onondaga County,” Barone said.

“This year to date, there are already 46. It’s really hitting close to home,” he said.

In that same year, more than 39,000 people died from unintentional drug overdoses nationally. Additionally, as many as 2.5 million people are treated nationally at hospitals every year for drug-related poisoning, and every day 2,000 teens use prescription drugs like Oxycontin or Vicodin to get high for the first time, according to an ACR Health press release.

With staggering figures like these, it’s important to let people know where and how they can get help, Barone said. 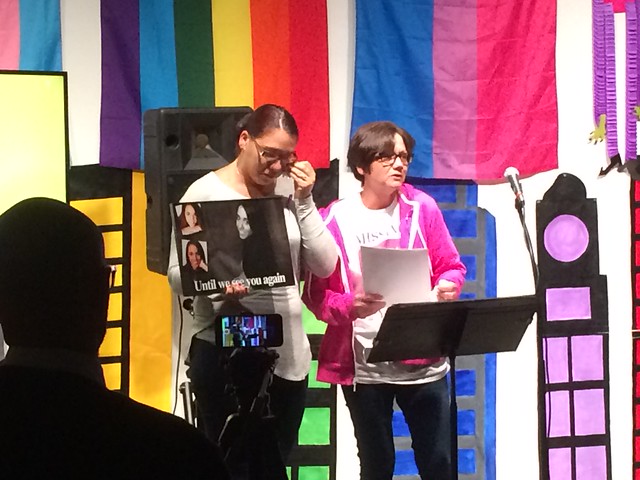 During the vigil families spoke about how drug overdoses have impacted them.

ACR Health works each day with people who are addicted to drugs.

Among its services: syringe exchange program, where users can get clean needles; Narcan training, which teaches people how to safely apply and use the emergency medicine that combats an overdose; rehabilitation; and long-term treatment.

The important thing, Barone says, is that people know that ACR is always there to help.

One of the biggest problems associated with addiction is the public perception that users are bad people, which can prevent them from seeking the help they so desperately need to fight their disease, said Anthony Racciatti, who works at ACR Health.

While ACR employees shared moving stories at the vigil, one of the more powerful parts of the evening occurred when Matt Carberry, a person in recovery, shared his story of using “every single day for the better part of 15 years.”

Now he is clean and wants to ensure that others get the same help he once did.

“If I had anything to say to a using addict, it’s to get help, man,” Carberry said. “The biggest thing that helped me was the relationships I had with others.”

One of the final speakers of the night was Angel Sestito, who lost her daughter Adrienne Sestito on Sept. 23, 2015 to addiction.

Sestito stressed that drugs don’t discriminate, telling the story of losing her daughter who was a straight-A student, a cheerleader, a member of the National Honor Society and a graduate of D’Youville College in Buffalo, before passing away at the age of 22.

“If I could say one thing to her, it would be how much I love her and how proud I am of what she accomplished in her short life,” Sestito said, pausing throughout to collect her thoughts and hold back emotions.

She then read something that her daughter wrote during her struggle with addiction.

The sad, beautiful piece of writing helped capture the thoughts of someone struggling with addiction, summarizing the essence of the event.