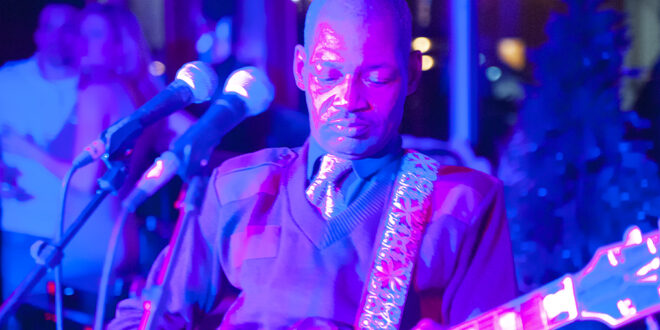 Eli Harris performing on guitar on New Years in 2014 at the King of Clubs in Armory Square. | Ben Cleeton, Special to The Stand

Even after his passing Syracuse’s most well-known busker, Elijah “Eli’ Harris is still giving. I’d written about him back in April of 2020 when he met his tragic demise being hit by two cars. It is a sad memory, as my friend and musical brother was a beautiful and giving soul.

But some might say, wait a minute, giving? Didn’t you say Eli was a busker? Aren’t buskers those street performers that hang around busy intersections asking for money? Yes, Eli was a busker, but he never asked for money. Oh, he may have laid his old holey guitar case out on the ground at his feet, suggesting a place where one might lay a tip while he performed. But his performances were freely given.

He would do renditions of his tried and true crowd favorites: “On Broadway” or “Sitting on the Dock of the Bay,” and when the feeling was right, he’d punctuate them with his famous foot shuffle and the “Eli Spin.” Eli worked as hard as anyone else and gave from his heart, just as the tips were.

When the crowds would die-down Eli would pack up his guitar, tips and all, hop on his bicycle and head to Armory Square, Marshall Street the SU Dome or wherever the happening place was.

Lakisha Harris is Eli’s daughter. She wants the memory of her father’s giving spirit to keep going. She’s been working with Jeffrey Comanici, executive director on Syracuse University’s advancement and external affairs team, to set up a scholarship fund. The scholarship, in Eli’s name, will be awarded annually to a University College undergraduate student studying music or a related field. The first of the scholarships in the amount of $1,000 will be awarded in the fall of 2021.

Michael J.  Frasciello, dean of the College of Professional Studies at University College, said “Scholarships such as the Harris family scholarship are vitally important to creating more expansive support for non-traditional students who desire to attend Syracuse University.”

Thus far, Lakisha has put up enough money on behalf of the Harris family to continue the annual $1,000 scholarships for the next decade. Further donations are sought to bolster the scholarship fund so more who might not otherwise have access to the university can continue their education.

They family will be hos a tribute to Eli’s life from 3 to 7 p.m. July 17 at Hendricks Chapel on the Syracuse University Quad. The event will feature raffles and giveaways, and of course, live music. Donna Colton, Joe Driscoll, Christenelle and others are scheduled to perform along with Eli’s granddaughters who will do a praise dance.

I, president of Joined Artists, Musicians & Singers (JAMS), will emcee the event and speak about Eli’s presence on the Syracuse music scene on behalf of the family.

More information about the scholarship will be presented at the event. For those interested in learning more about SU scholarships, visit HERE and to make a donations to the fund, reach out to Jeffrey Comanici, who oversees the fund.

“The intent of the scholarship and tribute,” Lakisha said, “is to celebrate my father’s legacy and contributions to the Syracuse music scene and to keep his giving spirit alive.“

It looks like Eli’s tips must’ve been falling out of the back of his old holey guitar case as they are now there for the getting. I believe he knew that they were not his to keep but only his to used for a time and then to give back as he’d pedaled away toward a more happening place.

Reggie Seigler is a South Side resident and regularly writes the
“A Friendly Five” music column. If you have a story suggestion, contact
Reggie at reggie@softspokenband.com or (315) 479-9620