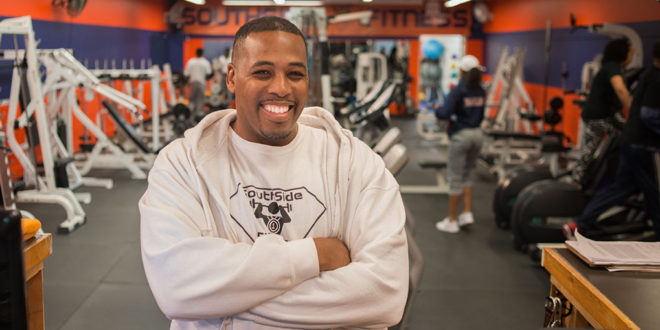 When Tim Edwards was growing up on the South Side, he always had a passion for fitness and giving back to his community — passions he held onto his entire life. Finally, he has been able to make his dreams a reality: owning a gym, which happens to be in the same shopping plaza where he slept outside as a teenager.

Southside Fitness, a low-cost gym, has grown in popularity since opening in December 2016. On a clear Monday night, the gym is buzzing with chit-chat and the soft thud of barbells hitting the mats. Tall and muscular, Edwards bounces around the orange-and-blue painted space in a Southside Fitness T-shirt, laughing with gym members and providing a helping hand when needed. 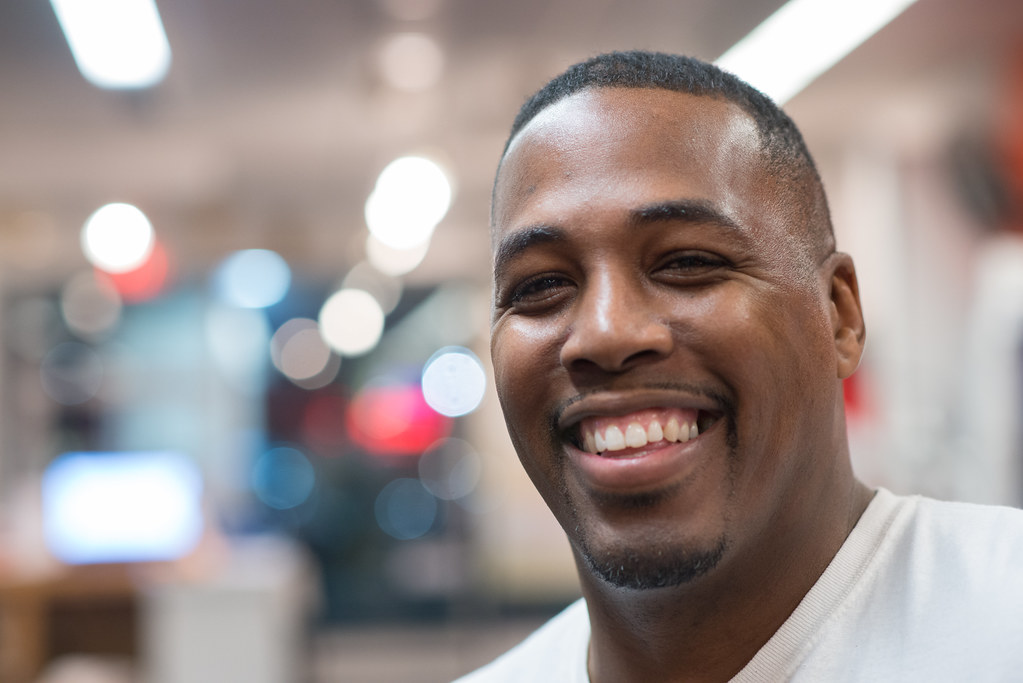 Edwards hopes the gym will promote healthy behaviors and bring the community together socially.

“It’s something I’ve always wanted to do, to bring something positive to the neighborhood,” he said. “I felt such a sense of community growing up and wanted to recreate that here.”

Edwards’ mother passed away when he was 11, leaving him and his five siblings on their own. After trying unsuccessfully to live with his estranged father in North Syracuse, Edwards alternated between sleeping on the street and crashing on friends’ couches.

Every morning, he would wake up early and travel 20 minutes north to arrive at Nesci Produce’s truck terminal by 4:30 a.m. There, he would unload produce. After his two-hour shift, he would take another hour-long bus to attend school at Cicero-North Syracuse High School, where he was able to attend using his father’s address. Edwards said he never missed a day of school — he was motivated to get off the streets.

“When you’re sleeping from place to place and don’t have somewhere to stay, you want to get out of that situation,” he said. “When I was younger, it was just me alone.”

As an adult, Edwards worked as a social worker at St. Joseph’s Hospital Health Center, but never let go of his dream to own his own gym. He began picking up extra minimum-wage shifts at Champions Fitness Center in Cicero to learn about the gym business.

After local banks turned down his applications for a loan, Edwards, now 42 years old, decided he would take matters into his own hands.

“I said no matter what happens, I said I’m going to open a gym this year,” he said. “And I took all the money, everything I saved up, and I opened the gym.”

Edwards said the space he chose for the gym just happened to be available when he was looking to rent. This location was ideal, he said, because it was home — across the street from where he grew up and in the same plaza where he played and slept during his teenage years.

After he began renting the space, Edwards had just three weeks to prepare before opening the gym. He said he and his family painted the walls and assembled the equipment before the big December opening.

The result? A true “vision turned into a reality,” said Janette Edwards, Tim’s wife. “I could not be more proud of him.”

Membership to Southside Fitness costs $25 a month and includes access to a variety of classes, such as yoga and Zumba — classes some gym members have never taken before. Edwards also offers personal training sessions. He hopes to attract those who couldn’t afford a gym membership elsewhere, or those who want to work out at a “family-oriented” gym.

“I want to recreate the community I had growing up,” Edwards said. 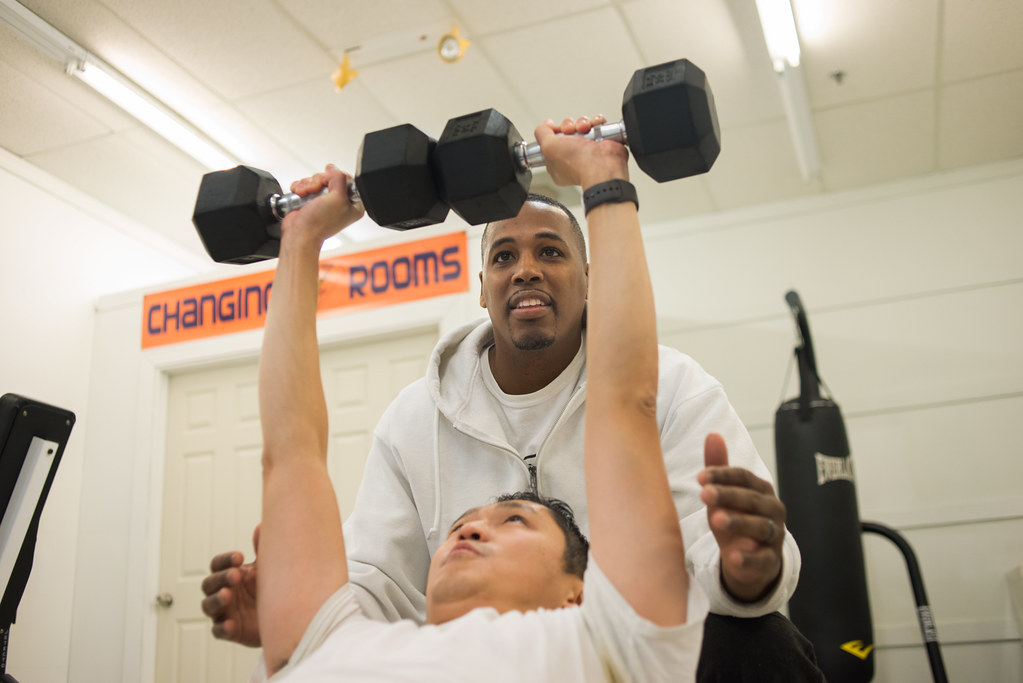 The atmosphere of the gym conveys that feeling. Janette Edwards sits at the front, greeting members as they enter. Edwards mills around the gym, offering encouraging words. A small area with couches and a coffeemaker provides a small gathering space for people to talk and relax.

Regina Glen, a South Side gym member, has been exercising at the gym since it opened. Having grown up on the South Side and then moving to the East Side, the gym “feels like a reunion to me,” she said. Previously, she had been a member at a gym in DeWitt.

“At my old gym, I was just another number, a card to swipe,” she said. “But the atmosphere here — everyone goes above and beyond. It’s a big improvement to the South Side.”

Most members walk to Southside Fitness, Edwards said. Many have never used gym equipment. He said he wants to create a space where guests feel comfortable asking questions about exercise and feel empowered to keep coming back.

Todd Laidlaw, another gym member, didn’t know a lot about exercise before joining Southside Fitness. Now, taking personal training sessions with Edwards, he said he feels “stronger and so much better.”

“People know you here,” he said. “Going to the gym is enjoyable for me.”

In a neighborhood that has a lack of access to healthy resources, a local gym could help encourage healthy behaviors among its residents, said Evan Weissman, assistant professor of food studies at Syracuse University. He said that the opening of a gym on the South Side “is a sign that people are really responding to health inequality in the area, and these efforts are picking up speed.”

Looking ahead, Edwards said he hopes to offer more classes and to continue to engage the community. He said he plans to partner with the Syracuse Department of Parks, Recreation & Youth Programs, headed by Commissioner Lazarus Sims, to teach children from local school districts about exercise and healthy behaviors.

Sims, who has known Edwards for 25 years, described Edwards as a skinny kid out on the basketball court when they first met. Sims is proud of his friend and excited to plan events to get the community involved with fitness.

“He’s a good person, very passionate about what he’s doing, and is really trying to improve our community,” Sims said. “He’s one of us.”

If Edwards has any reservations about his past and sleeping on the street, he doesn’t show it. As he surveys the gym, his smile reveals that he is living his dream, in real time.

“If you work hard enough, anything can happen,” he said. “I’m a product of that. I can see something tangible from my hard work.”