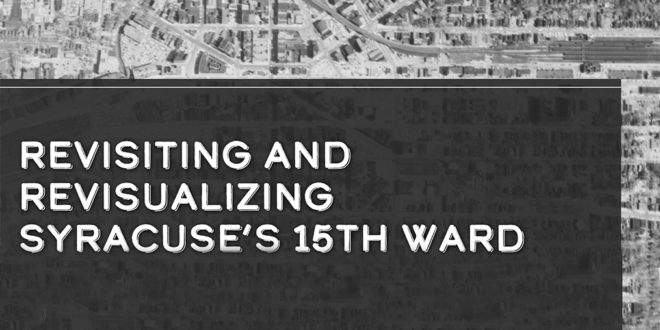 View a 3D model of Syracuse, overlaid with historical photos and predictions of the future

Those who don’t know history are doomed to repeat it, so the Visualizing I-81 team at Syracuse University are digging into the past for the future of the community.

The impending I-81 viaduct reconstruction project has been a huge point of debate in Syracuse for several years, with community members wanting to ensure that those most negatively impacted by its replacement aren’t the same ones being impacted when it comes down.

As opposed to a traditional news story, the Visualizing I-81 team is hoping to connect readers more closely with the stories of community members. The powerful visuals and interactive features make 1950’s Syracuse come to life on their site. Community members can contribute to this effort by sharing historic photos and stories from the area.

The Visualizing 81 team includes: students Amanda Paule, Sonny Cirasulo, Molly Gibbs, Lawry Boyer, Kevin Camelo and Evan Starling-Davis, who are all Syracuse University students working to document the past, present and eventually the future of the East Adams Neighborhood through emerging VR technology along with professors Dan Pacheco, Amber Bartosh and Jon Glass.

“We have this future community that’s going to be built,” Pacheco said. “Let’s make sure that it’s an equitable community. Our hope is that these immersive media explorations of the past will then bring people together to push for the kind of community that we all want.”

The team is working to build the 15th Ward of the past and present through documents, pictures and first-hand testimonials. Paule combs through paperwork and conducts interviews to gain an understanding of the area’s former glory; Gibbs takes pictures of the area to inform the virtual render, and Cirasuolo and Boyer use the information to take viewers through a virtual tour of yesteryear. The team is very enthusiastic to hear from community members who have memories of the past, and their hopes for its future as well.

The project highlights the thriving Black businesses and community spaces of the ’50s, including Aunt Edith’s restaurant and Pioneer Homes. According to the project, 400 to 500 businesses were razed during highway construction. The project also points out that there were 32 Syracuse businesses listed in the local Green Book. The main goal of this project, they say, is to focus the story on the people rather than the construction.

“It can get muddied, when so much of the focus is on the infrastructure, and sort of loses sight of the people that are being impacted by those projects,” Paule said.

The 81 overpass construction began in 1964 during the country’s period of Urban Renewal. Like the vast majority of Urban Renewal Projects, this project cut through a Black community of economic prosperity. The overpass decimated the thriving business district that was the 15th Ward, resulting in the relocation of 1,300 to 2,200 families, most of whom wound up leaving the city.

“I call it negro removal. That is literally what it did; it decimated our communities,” economist Dr. Julianne Malveaux said last month during a talk hosted by Syracuse University.

Today, where the the former 15th Ward sat is now defined by the highway, with those living near the viaduct likely to suffer from noise and air pollution. While waiting for a final plan to be announced, The community grid project was approved at the local level last year, but federal approval, along with the release of a development plan, has yet to happen. Community advocates like David Rufus from the New York Civil Liberties Union want to ensure that residents are not once again forgotten by the city and private investors during development.

“I think that anytime big business comes in and there’s no care for the community, something’s bound to be lost,” Rufus said.

Malveaux agrees that businesses have a role to play in shaping neighborhoods, and while that role can be one of exploitation, it can also be one of mutual benefit

“This is not just a government thing, when corporations are in cities they can also play a major role in urban revitalization,” Malveaux said. “Many of these corporations are making billions in profits, and they should be willing and able to put some of that money back into our communities.”

Rufus was a child when he moved from the Pioneer Homes, so he said he personally doesn’t have many memories from the area pre-81, but has heard the tales of devastation and change from friends and relatives.

Going forward, as more of the plans for the area become known, the team plans to virtually create the future of the East Adams Neighborhood. Currently, they are working on using new VR technology called photogrammetry to depict what the original AME Zion Church on East Fayette Street will look like once proposed renovations are complete.

The team is also working on ways to make their effort more interactive. Possibly in collaboration with the city, the team wants pedestrians to be able to scan a code on a street sign then see what used to be there as well as and what is proposed to be there in the future. All the students are enthusiastic and believe the project has the longevity to continue long after even the youngest members have graduated.

“The main goal is to bring some more understanding to the topic by having all of that time — past, present, future — all collapsed into one piece, one understanding of I-81,” Paule said.