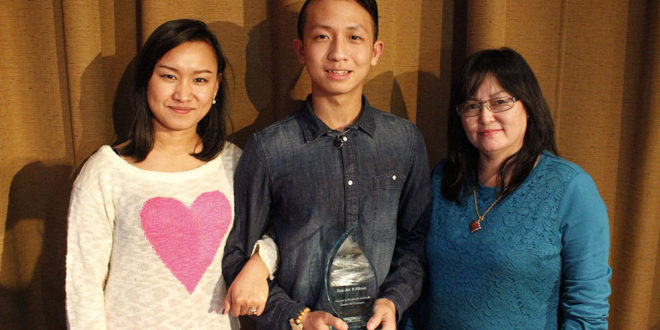 Zau Jat N-Hkum, center, holds his award with his sister, Mai, and mother, Moon Ra, who both attended the awards event.

The honorees were selected for their efforts to end racial injustice and promote social equity in Central New York.

N-Hkum is a senior at the Institute of Technology at Syracuse Central (ITC) and has been a photo contributor to The Stand newspaper. He even shot the cover image of Quindell Williams featured on the February print issue. Last year, he was one of two high school students who completed a rigorous four-day photo workshop at Syracuse University.

He’s served as a facilitator in the “Dialogue to End Racism” program between ITC and Central Square high schools and joined in the four-mile march from the Onondaga Nation to Syracuse to support native rights related to Standing Rock. He holds a leadership role in the Diversity Club at the high school, and he is involved in the Seeds of Peace, Teen Institute and Citizen U. 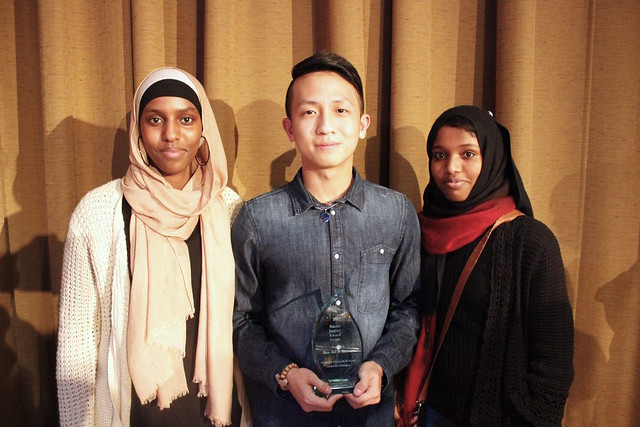 Zau Jat N-Hkum, center, holds his award with friends Samiya Muse and Hanan Muse, who are also both refugees.

During his acceptance speech, N-Hkum felt overwhelmed and honored to receive the award. He shared that he is originally from Myanmar, a country that refuses to give freedom to its own people.

“You cannot get freedom in my country,” he said, noting this is why he and his family had to leave. “We want freedom, liberty and justice for better education and healthcare — these basic human rights. And I’m not only speaking about my own country, but for all the countries without these rights.”

He concluded that when rights are being taken, “we must stand up together for our brothers and sisters. It doesn’t matter if it’s far away or right next to your house … we must all work together for peace and love.”

He thanked the Northside Learning Center for its help when he first came to this country nine years ago, the Syracuse City School District for supporting diversity, Interfaith Works for its efforts in resettlng refugees, and also the Syracuse community and Mayor Stephanie Miner for always welcoming refugees. Lastly, he thanked his close friends, teachers, sister and mother for their support.

Looking forward, he hopes his photography will dismantle barriers, celebrate diversity and promote justice to end prejudice of any kind. He feels passionately about the injustices he saw inflicted on his people (the Kachin from Burma and Myanmar) and wants to continue to find ways to stop injustice in his new home, Syracuse.