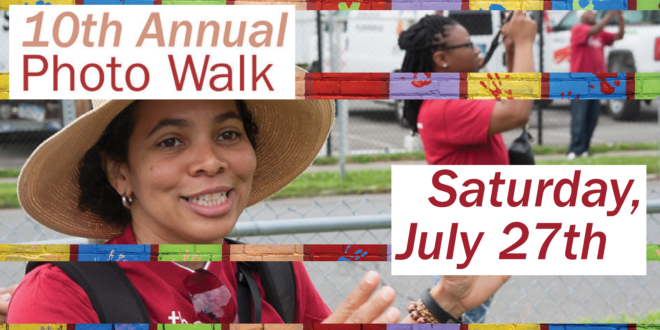 Annual event set to march into its 10th year July 27

The Stand has used this axiom to capture Syracuse’s South Side for a decade now and is set to continue the tradition of its annual Photo Walk Saturday, July 27, in an even bigger way.

To commemorate this milestone year, the event will be divided into three walks: the classic path taken on past year’s Photo Walks, a path around the I-81 viaduct and a historic offering. All three walks will begin at 10 a.m. by gathering at the South Side Innovation Center, 2610 S. Salina St. There is no cost to attend.

Ken Harper, professor of visual communications at Syracuse University, will serve as photo guide for the classic walk along with resident Shad McKinney, who will serve as the community guide.

“We are not just coming in cameras blaring,” Harper explained. “The challenge with the Photo Walk is to make sure it’s what the community wants, and we want to involve as many members as possible.”

This is Harper’s second year participating in the event.

“You can rub elbows at the event, share food, drinks, laugh and see the problems everyone goes through,” Harper said. “Photography is a vehicle to help us understand other people and an excuse to be a part of someone else’s life.”

The Stand helps people come together to dispel preconceived notions and stereotypes by offering the walk, Harper believes.

While the classic walk will take participants from the Innovation Center down South Salina Street to Kirk Park and back, the I-81 walk will begin below Syracuse Public Housing along Burt Street through Pioneer Homes, Wilson Park, Toomey Abbott Towers and directly under the shadow of the viaduct.

Clifford Ryan, creator of the anti-violence campaign OGs Against Violence, wanted to be a part of the walk for a while after he met Ashley Kang, director of The Stand, four years ago. This year his wish comes true, furthermore as a community guide for the I-81 walk along with photo guides Bob Gates and Mike Greenlar.

Ryan expects over a 100 people at the Photo Walk and believes it’s going to be a great experience with the potential to showcase a true picture of the community.

“This year, it is even likely we’ll see some high-profile participation, including several from the mayor’s office,” Kang hinted.

Gates has served as a guide twice before and has seen a broad range of participants, from university students to seniors. He believes the event offers great way for individuals to get involved in matters of the community.

“The Stand is a very important part of the South Side community as it lets people know what’s happening within,” Gates said. “The Photo Walk is like a huge selfie, allowing people on the outside to see the community in a positive light.”

The original construction of I-81 cut the South Side off from the university and destroyed homes to construct the highway, Gates said. The walk will take participants through these issues and discuss how the residents have been affected with the goal to revisit the community over the coming years and assess the development.

For Kang, the I-81 walk is a significant addition to commemorate this anniversary as it focuses on the residents who live by the viaduct and whose homes have been a stone’s throw away from the highway for generations.

On a broader note, Kang says the Photo Walk is a way to share in people’s lives and offer an unique look into an active and vibrant neighborhood.

“There is a sense of camaraderie on these walks. [The event brings back] former residents, current members participate and those from outside the city even join in,” said Kang of past year’s participants.

The walk has grown in popularity since, originating off of Scott Kelby’s Worldwide Photo Walk, which is now held the first Saturday of October each year at locations around the globe.

“It’s a day to document the community,” Kang said. “You can use your own cameras or cell phones and each photo guide will have professional cameras with them. Photos will be shared and published online as well as featured in the September print issue.”

This year will have triple the amount of photographic documentation with the three walks, the third being the historical trail. It will be led by David Haas, owner of the Instagram page Syracuse History and first-time participant of the walk.

“I will be focusing on bringing out the historical and architectural aspects of South Side, pointing out the homes and buildings as well as new construction,” Haas said. “It will also highlight the living history, stories from people who have been in the area for years.”

For Keith Muhammad, South Side resident, the walk is a helpful and educative way to showcase the history and bright, affirmative side of the neighborhood.

“You can capture people sitting on their porches, kids playing outside, neighbors talking to one another, all with your camera,” Muhammad said. “I think the walk is a great initiative.”