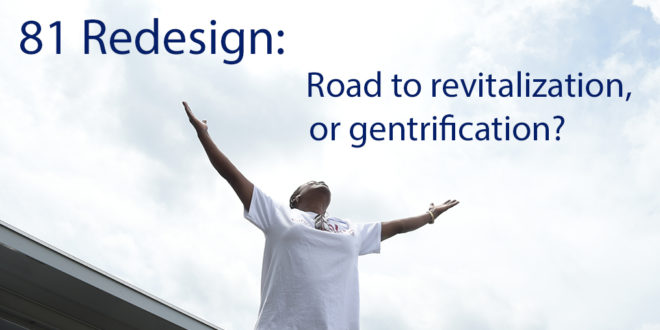 Given the city’s less-than-stellar track record on big projects, our columnist implores residents to make their voices heard.

About 800 years ago, my brother Steve and I were building a treehouse in the woods near our home when there were woods near our home. I still remember the joyful gravity of the endeavor — gravity being a concept we’ll revisit momentarily. Empowered by borrowed hand tools and a pre-teen sense of Manifest Destiny, we hammered and sawed until dusk. At last, there was no choice but to climb down and head home for dinner.

“I’m dropping the hammer in case you’re still there,” Steve warned a bit too late.

The hammer crashed into my skull, opening a good-sized wound but giving me a lifelong clarity of foresight. So, let me tell you what I see these days: The street-level Community Grid proposal is the treehouse. It’s full of promise and possibility. We see it replacing the widely despised I-81 viaduct and making our city whole again. Almond Street will be “the Champs-Elysees of Central New York,” Jay Arzu, a transportation equity researcher with the Congressional Black Caucus Foundation who has taken an interest in the I-81 project predicts.

How can we not smile just thinking about it? We see lush greenbelts and bikeways. We see townsfolk strolling past locally owned haberdasheries and gourmet bagel shops that pay homage to the 15th Ward’s Jewish population. We envision the area being renamed “The Funky-Green-Multi-Ethnic-But-Mostly-African-American-Authentic-But-Doesn’t-Instill-Fear-In-White-People-Neighborhood.”

And then we remember this is Syracuse, and the hammer starts to fall. I don’t mean to be a Mr.  Community Grid Grumpy Pants, but let’s face it: Syracuse has a knack for treating its greatest assets and opportunities with all the subtly of a canal mule kicking a boatman in the groin. It’s in the water here, literally, starting with the befouling of Onondaga Lake and then with the paving over of the canal. There was the much-lamented stadium stupidity: While other communities were reinvigorating their centers with quaint baseball parks, Syracuse went back to the ’70s, erecting a multi-purpose stadium closer to a county dump than to downtown. I won’t even bring up the Payments in Lieu of Taxes swindle that helped finance Destiny DOA.

More destructive than any of that in human terms was the sacrifice of the 15th Ward for a mile-and-a-half of elevated freeway. Now that the viaduct is apparently coming down, it’s hard to find anyone living near the thing who believes that’s a bad idea. Who doesn’t want to see the city knitted back together, not to mention the sun now and then?

Only there’s a Catch 22: Will tearing down the highway and re-imagining the South Side do a number yet again on the people who live there, forcing them to move out as land values soar?

“I think there’s way to do it that’s not pure capitalism,” said Trudi Antoine, a librarian at the Beauchamp Branch, whom I spoke with on a recent Tuesday during a New York Civil Liberties I-81 organizational meetings there.

In her vision, the new South Side has great restaurants, health food stores, parks pulsing with community activities and a self-contained-but-welcoming vibe.

It also has an African-American Cultural Center — a priority seconded by Charles Pierce-El, (a member of the Southside Community Coalition and The Stand’s board of directors) who was also at the meeting.

There’s hope that jobs training, skill-building, business incubators and more economic opportunities overall might help keep the South Side within financial reach of the existing population. Also to that end, the NYCLU is looking at the idea of grandfathering property tax rates for existing homeowners.

But little or none of that will happen unless the community fights for it. Organizers, scrambling to energize a community that isn’t used to flexing political muscle, stress that opportunities to get involved are as endless as the traffic buzzing past on the viaduct. The most important pivot point may be the state Department of Public Transportation’s 45-day public comment period. The DOT legally must respond to all comments received during that time frame, which could begin at any time. The NYCLU hopes to organize at least 8,000 resident responses, and in doing so, shape the project to lessen the pain and expand its benefits.

“This is our only way in,” said Lanessa Chaplin, project counsel for the group, at a different 81 community event held early in May.

Not getting involved is a form of political action, too. It’s a virtual green light to luxury townhouse developers, upscale retail chains, certain tax-exempt universities and gentrifying hipsters who wouldn’t know the 15th Ward from the 15th tee. It’s a fast track to a Starbucks, a Chipotle Mexican Grill, a Bed Bath & Beyond, perhaps even to that crown jewel of gracious living: a Wegmans with a full burger bar. (“No,” Pierce-El told me defiantly. “We want a Black-owned-and-operated grocery store.”)

Which way will it go? Can the city balance aesthetics with social justice when sometimes just keeping the sewers from backing up seems too much to ask?

The implications of “this monstrous thing” — as Chaplin calls the project — are so, well, monstrous, that confronting the most immediate challenges alone can quickly get overwhelming. People with respiratory diseases need to be protected from particulates released during demolition. Disruptions to the routines of school children must be minimized. Minorities must get their fair share of the construction jobs. Bus service must be improved. Anyone uprooted by construction should be entitled to right of return. Soil samples should be taken to test for lead and other toxins. Beyond those pressing concerns and others, there’s the larger matter of righting a wrong and restoring some swagger to the place.

“To me this is about reparations,” said Yusuf Abdul-Qadir, chapter director of the NYCLU. “We need to repair the harm that’s been done and we’re still dealing with.”

Redressing grievances is not a vision, though. The 15th Ward is never coming back. To the contrary, the new South Side, as Lemir Teron, an environmental studies professor at SUNY-ESF, put it, is “on the menu” for gentrification. The good news is there’s still time for South Side residents to organize into a powerful force — to grab the hammer of urban renewal before someone gets clunked in the head.

“We’re talking about redefining the city,” Antoine, the librarian, said. “We need to get in there and get our voices heard.”

Jeff Kramer is a newcolumnist for The Stand. He has written newspaper columns for many, many years in Syracuse and elsewhere. To contact him with story ideas, or to let him know your hopes or concerns about the I-81 project, call (315) 420-2619 or email jeffmkramer@gmail.com

Want to be heard?

Several meetings, panels and sessions on the I-81 redevelopment are scheduled or in the works. Below is a list of upcoming meetings. Visit The Stand’s online community calendar to stay up to date. To have an event added to the calendar, email ashley@mysouthsidestand.com.

Each Saturday
The New York Civil Liberties Union organizes an I-81 canvassing session for interested volunteers. All gather at the Dunbar Center, 1453 S. State St.

To learn more about either, contact Lanessa Chaplin at lchaplin@nyclu.org.

NYCLU Bus Trip to Albany
On Monday, May 13, the New York Civil Liberties Union has organized a bus trip to Albany, which will include an exhibit of the 15th Ward, displays of damage done by I-81 and a panel discussion on current concerns. NYCLU has reserved the bus and will be treating attendees to lunch. This is a full-day event. The bus will leave Syracuse at 9 a.m. and return around 4 p.m. To register for the bus trip click here. Contact Kevin Atwater at katwater@nyclu.org or (315) 471-2821 if you have trouble registering or have additional questions.

Critical Issues Community Forum
A community forum to discuss critical issues facing families living in Syracuse will be held from 11 a.m. to 1 p.m. Saturday, May 18, at the Well of Hope Church, 1640 South Ave. Organized by the Alliance of Communities Transforming Syracuse, this forum will discuss how the I-81 project, the Syracuse Surge and Blueprint 15 will impact job creation, workforce development, public school realignment, church and business relocation in Syracuse. NYCLU, The Allyn Foundation, Urban Jobs Task Force, Syracuse City School District, ACTS, Center State CEO and elected officials have been invited to share information with residents about the initiatives and projects. Additional sponsors of this event include: Interdenominational Ministerial Alliance, the Covenant Fellowship of Churches and the Northeastern District Baptist Association.

Individuals may offer comments on the DDR/DEIS: