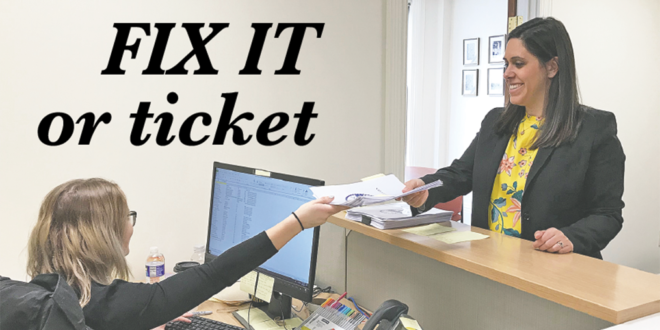 Syracuse has launched the Bureau of Administrative Adjudication (BAA), which aims to fight blight by improving compliance with property codes.

Before the new changes, cases could only be referred to the city’s Department of Law. As a new department, the BAA will serve as another option to handle code violation referrals. Property owners have between 15 to 21 days to comply when violations are issued.

BAA’s director and chief administrative law judge, Leah Witmer, said if there’s no compliance, BAA issues a notice of violation ticket with a corresponding fine. The property owner will then have 30 days to enter a plea.

Respondents can either plead guilty and pay the fine, request a hearing by pleading not guilty or guilty with an explanation.

If they do nothing, the fine doubles, Witmer said.

The sheer number of violations in recent years have been more than the city’s Division of Code resources can handle. There are approximately 9,000 one and two-family units in Syracuse overseen by that division, noted Ken Towsley, the office’s director.

Towsley said that up until now, the rental registry hasn’t really been enforced, and as a result, many cases end in landlord/tenant eviction court.

Mercedes Chairs, 29, attended eviction court on Dec. 5, 2018 after receiving a notice of eviction. She lived at 1101 Teall Ave. for over a year.

Chairs said she began to start withholding rent because issues in her apartment weren’t being addressed, even after code enforcement wrote a list of needed repairs.

“There’s mold, and I have a 4-year-old daughter. I can’t stay any longer,” Chairs told The Stand.

As the threat of eviction loomed, Chairs had already accepted her fate. She already secured a new place to live, so her only request to the judge was to grant her at least two weeks to move.

On the same day, Samantha Laux, 33, also pled her case in court because she was facing eviction. Laux and her six children lived in their apartment on the North Side of Syracuse since October of 2017, but she’s been frustrated with the living conditions.

She withheld rent for two months because she told the landlord her apartment had mice, roaches and a toilet that did not work. In court, she said nothing had been done to address the issues.

“When you have roaches that are coming out of the top of your refrigerator and you can’t keep food in your fridge because there are too many roaches, that’s sad,” Laux told The Stand.

According to the Onondaga County Tenant Rights Handbook, insect infestation is an example of a violation of the warranty of habitability. Under the warranty, it is illegal to not provide a tenant with “a livable, safe and sanitary apartment.

Beginning in March, the codes division sent 1,000 violation letters to property owners who did not apply to the rental registry, said Witmer. Owners were given a 30-day registration period. Those who don’t can expect to receive a BAA violation, complete with a fine.

BAA cases will be heard by Witmer, who also works with four part-time administrative law judges (ALJs). One will offer support in the hearings, while the other three work on the appeals panel that will meet quarterly.

“The underlying goal is to improve the quality of housing by holding property owners accountable for unresolved violations through the imposition of civil fines,” Witmer said.

Four violation categories have been identified by the BAA — general property maintenance, blighting influences, periodic inspections and zoning. Each category has its own ticket fines and schedule.

Issuing civil fines is going to be a faster way to address unresolved violations, but it’s important to understand that the BAA can’t force compliance. A property owner may decide to just pay the fine or fines without correcting the violation.

Judges in city and state supreme courts have broader authority, but ALJs only have the ability to deal fines, Witmer explained.


The BAA will also utilize software to improve how the city deals with violations. Witmer said the BAA has built out the Division of Codes software to include a workflow and data collection, while her office is exploring more efficient software options.

The BAA begins with a trial period that will last around six weeks, according to Witmer. Throughout the trial, every part of the process from scheduling hearings and payment collection will be evaluated to determine if any changes will need to be made.

“We’re trying to do a slow roll out,” Witmer said. “To make sure we that we have everything right.”