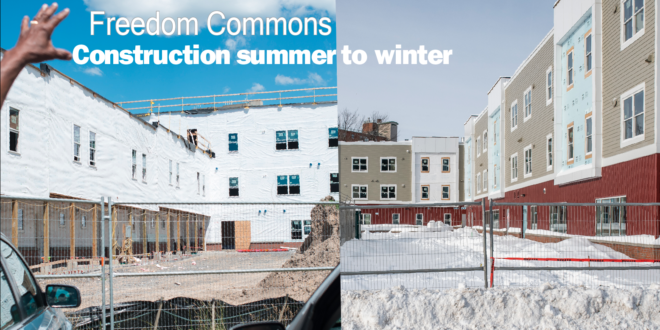 Freedom Commons, a unique 57-unit residence being built as a collaboration between Center for Community Alternatives (CCA) and Syracuse Housing Authority (SHA), is set to be completed on Burt Street by March 1.

Construction has been in the works since the summer, but many South Side residents have limited knowledge about just who the intended tenants will be.

Marissa Saunders, the newly hired director of community engagement for CCA, and Kelly Gonzalez, the newly appointed deputy director, met with South Side residents Jan. 6 during the monthly Southside Tomorrow’s Neighborhoods Today meeting to update residents on the project.

“We are working now to go around and make sure community stakeholders understand exactly what is coming,” Saunders said.

Some are concerned a new halfway house and/or shelter is being built, but Gonzalez clarified that the majority of units are affordable apartments for families. A collection of other units will be open to individuals with a criminal history, but it’s not likely this will include individuals just getting out of prison. “Because there is an income requirement to apply, it will unlikely be someone day one out of prison,” she said.

CCA thinks of the partnership in three parts. Frist the new construction will provide affordable housing to families in the form of one-, two- and three-bedroom units. These will be leased and managed by SHA and rented out based on a lottery system.

Next, nine units will be what Gonzalez describes as “supportive housing.” These are intended for homeless individuals, which she says could include those with criminal backgrounds or a qualifying disability or mental disorder. “CCA will provide the social services and wrap-around services for these residents,” she said.

The final feature is emergency housing, which will be known as the Freedom Commons Academy. These 11 beds will also be overseen and managed by CCA. Gonzalez said this is not being called a shelter because the purpose and offering is much more. The academy space will be a setting to help individuals get back on their feet, learn skills and gain stability. It will help them take the next steps to permanent housing, Gonzalez explained.

Individuals living and enrolled in the academy will be required to engage with services that CCA offers and will have an opportunity for greater support from peer-to-peer mentoring from other residents.
The pair added that the project wants to be inclusive and will have a community space open to the public and include a community advisory board.