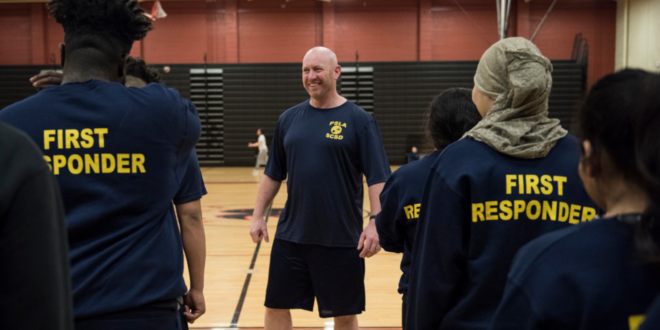 Maj. Jamie Bazdaric talks to a student before the start of physical fitness training. Bazdaric has structured the curriculum in a way that prepares students for the law enforcement career field. | Bryan Cereijo, They Wear Blue Photographer

Strumming a guitar inside his friend’s home on a spring evening, Ehblue Htoo paused and looked up. 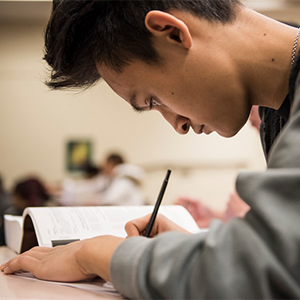 “Don’t we need a bass player for Sunday’s service?” he asked his friends and pastor during a weekly youth worship group meeting.

His pastor nodded, and Ehblue, known as “Blu” to his friends, confirmed he’d play bass on Sunday.

The Syracuse high school student, originally from Thailand and no more than 5-foot-6 and 110 pounds, has always found music as an avenue of happiness. While music and his service at his church are mainstays in his life, “Blu” does have an ultimate career goal.

To become a cop. 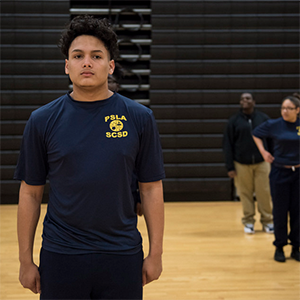 John Correa works 17 hours per week at a local grocery store to help support his family. When he’s not working, he can be found at the gym, meticulously practicing his jump shot in pursuit of basketball dreams.

In a few years, though, Correa might not be lacing up Nike basketball shoes but rather fitting into a pair of police duty boots.

He, too, wants to become a cop.

The extraordinary goal Htoo and Correa share is being shaped within the halls of a city school building.

Htoo (pronounced “too”) and Correa were part of a 16-student junior class last year in the law enforcement track at the Public Service Leadership Academy, a career and technical school at Fowler High School. PSLA offers four “academies” with 10 pathways for students to choose from, including law enforcement.

The class prepares students for a career in law enforcement, including the possibility of becoming a police officer.

In 2014, the Syracuse school board voted to replace Fowler with PSLA. The two schools had shared the same building since 2014, but only PSLA remains after last year’s final Fowler senior class graduated.

“Prior to freshman year, I was planning to go to Henninger (High School) but was assigned to PSLA. I really tried to transfer to Henninger,” Htoo recalled with a grin.

When a school district representative called him to tell him about the new PSLA program and listed its pathways, law enforcement caught Htoo’s attention.

But his friends were skeptical.

“They said, ‘You are Asian and too small,’” Htoo recalled.

His teacher, retired Army military police Maj. Jamie Bazdaric, joined PSLA as a law enforcement instructor in March 2016 and is now the full-time director of the law enforcement track.

As part of the first responder academy, Bazdaric, or as his students call him, “Major B,” prepares his students for a life of service and sacrifice, especially if they want to become police officers. 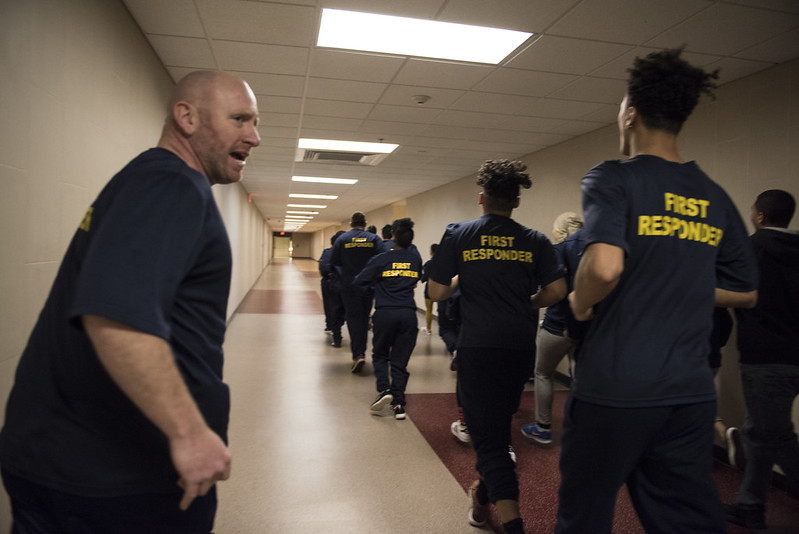 Major B runs through the school’s hallways with his students during physical training. Every time the students run, they cheer in cadence. On this day, while many teachers went into the hallway to cheer on the students, others weren’t too happy with the noise. “It’s what gets the kids excited,” Major B said about the chants. | Bryan Cereijo, They Wear Blue Photographer

“They have to be dedicated and understand what they are committing themselves to,” Bazdaric said.

He describes the law enforcement track as a “great vehicle” to become employable, but more importantly, get his students to graduate.

In addition, students are exposed to agencies in the area, including the district attorney’s office, the Syracuse Police Department and the Onondaga County Sheriff’s Office. These agencies all offer internship programs during and after high school.

Uniform inspections and workouts are also major points of emphasis in the curriculum, with PT training held every week. Some specific lessons include handcuff techniques and use-of-force training sessions. 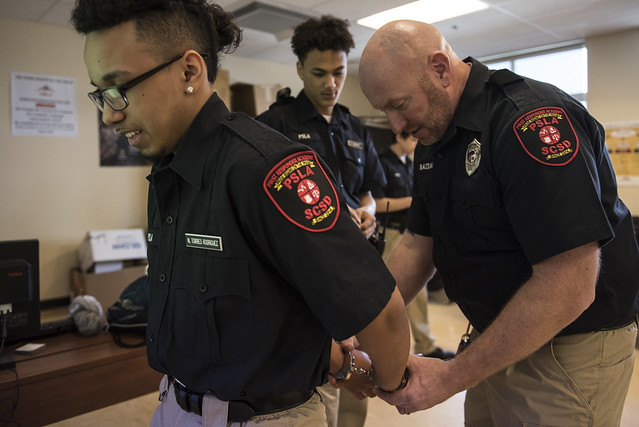 “Kids come here, and they want to be cops and learn the fun stuff, but anyone in law enforcement will tell you physical training and uniform preparedness are key elements,” Bazdaric said.

Bazdaric works to mend perceptions of the police not only in his class but through the entire school. In some instances, the class will run drills through hallways or use radios throughout the school day while wearing their police uniforms.

Bazdaric wants the other PSLA students to see how their classmates are working hard to become cops but are still friendly and cordial with everyone. He said this goes a long way to projecting a high-quality image of police by others moving forward.

When talking to prospective eighth-graders interested in the law enforcement pathway, Bazdaric centered his “pitch” around three main points: certification, college and community.

He tries to sell parents on those three objectives, saying their kids will pass certifications to help with future employment, earn college credit and also go through high school in a firm, yet caring, atmosphere.

The recruiting pitch seems to be working. Bazdaric hasn’t heard many parents tell him they’re worried about their child training to become a cop. Instead, many parents are supportive and believe disciplined training is good for their children in the long haul. 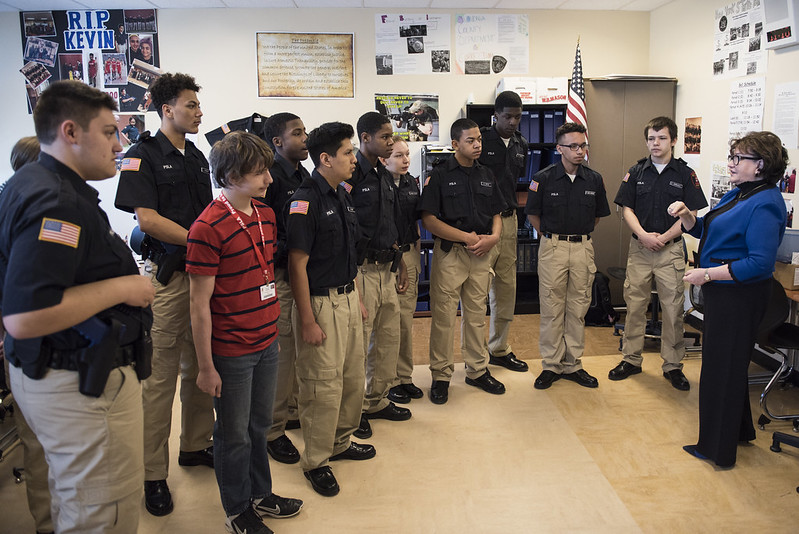 Correa, who is of Puerto Rican descent and hails from the east side of town, said his mother, uncle and grandmother have supported his decision to be a cop since Day One.

“(They’ve) given me all the support there is,” Correa said.

Entering the track, Correa was not the biggest fan of police in general, but after learning the history of police and basic training in the law enforcement class, he started to think more like a cop.

“This course is building me up to become a leader and a police officer at the same time,” Correa said.

In March 2017, the class suffered a tragedy when classmate Kevin LaShomb died suddenly. LaShomb was Correa’s best friend; Correa credited him as one reason he joined the law enforcement pathway.

Bazdaric credited both Htoo and Correa for stepping up to help keep the class together during that difficult time. 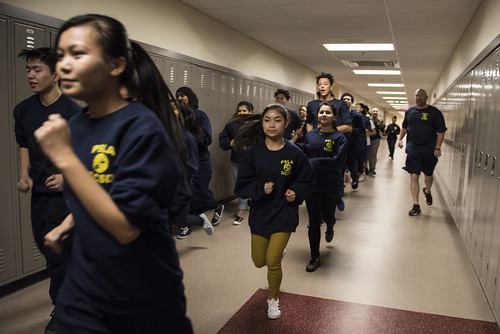 Law enforcement students run the hallways. While these students train for the requirements of the police academy and obtain various certifications, they cannot immediately apply to become police officers because many are not of age. They must first go to college or work different jobs after graduating high school. | Bryan Cereijo, They Wear Blue Photographer

“The biggest growth experience hasn’t been a test, it’s been the loss of a classmate,” Bazdaric said.

Besides training and studying, the class also discusses local policing matters. A Father’s Day shooting in June 2016 that left one man dead from officer fire generated a lot of conversation in the city of Syracuse and its surrounding neighborhoods.

An SPD officer shot and killed a man who had pulled a gun. A grand jury later found the officer justified for firing her weapon.

Outside of class, Correa said the incident was the only time he’d heard his family and friends speak differently about SPD.

“They would say the scenario was wrong and messed up, but I protected the SPD, saying they were doing their job,” he said.

Htoo agreed, saying SPD is just performing its duties: to protect the community.

“They are human, too,” he said. “They want to get home to their family. What they do is necessary.”

Bazdaric said he believes the opportunity to make a difference and see diversity in police is what drives all his students, specifically Htoo and Correa.

Bazdaric said students are interested in joining the law enforcement track while in high school because they have a “desire to go into a track that gives them the ability to make a change or be a part of something and make a difference.”

He added that he’s encountered changing perspectives of police not only in his class, but also throughout the school.

“The change they are making is already happening here at this school,” he said. 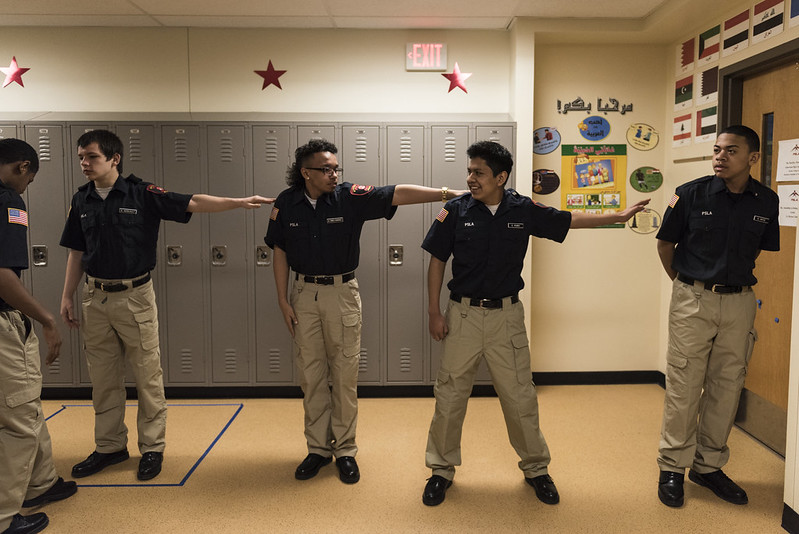 The 2016-2017 sophomore class lines up for uniform inspections that they’re expected to undergo every Tuesday. | Bryan Cereijo, They Wear Blue Photographer

Samjana Thapa, a junior computer forensics student at PSLA, said she and the rest of the student body have noticed the impact the law enforcement class has had on the school.

“They always seem so focused when they wear their uniforms and practice running in the hallways,” she said. “I think they all want to be cops to be able to do good things for the community.” 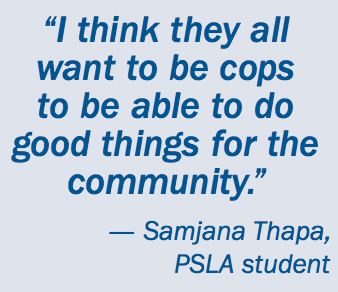 ransformed from one of the lowest academic performing high schools in the state to a school that receives attendance awards and has a higher graduation rate.

Bazdaric said he believes both Htoo and Correa have incredible potential.

“John is intelligent and personable,” he said. “He has an ability to lead and he wants to learn. Ehblue is a high honor roll student and a classroom leader.”

Htoo said he’s grateful for the relationships and connections Bazdaric and the leadership academy have provided, especially the police career connections he’s already made.

For Correa, the class was about motivating himself to attain his aspiration of becoming a police officer. He said from the class he learned “the integrity and will to keep moving forward.”

Correa said: “You need that ending fire to keep going and complete what you want to.”