One of Syracuse’s longest-standing community aid organizations will celebrate its 40th anniversary with a party its officers promise will include music, dancing and raffles.

Syracuse United Neighbors — known as “SUN” — works to boost jobs and fight crime, according to its mission statement.

“People feel unrepresented and feel that the government is not serving them in their low income neighborhoods,” said Rich Puchalski, the organization’s executive director. “So here we are to pressure the government, and we’ve been doing that for a long time.”

The 40th Anniversary Ruby Gala serves as a fundraising event for the group and a celebration of its growth. With the exception of some money from New York state’s Neighborhood Preservation Companies Program, much of the group’s funding comes from its $25-a-year membership dues and donations, which Puchalski works to secure. 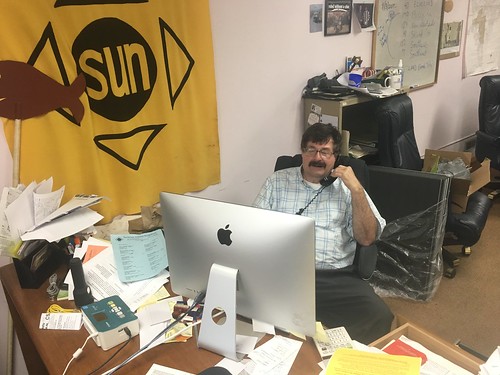 Rich Puchalski, the executive director of SUN, is in charge of most of the fundraising and organization of the entire group.

Robert Bucklin, a caterer and member of SUN’s board, said planning the event largely fell to him, and he’s been working on planning since January.

“It’s been a learning experience for sure,” he said. “But I wanted to do this, I am happy to do this for SUN. I’ve known Rich for 20 years and lived in this neighborhood for 26 years.”

As well as scheduling the venue, booking live entertainment, pulling together ticket sales and marketing the event, Bucklin persuaded local organizations to run raffles at the gala — a process he described as “way easier than he expected” as “everyone was so eager to help.” The raffle prizes range from tickets to different venues around Syracuse to a two-person Safari and Lodge Vacation in South Africa. Organizers of the gala include prominent speakers from the community, such as Sharon Owens, the executive director of Southwest Community Center and longtime supporter of SUN.

Owens said she desires to keep her remarks timely, emphasizing SUN’s importance after 40 years of work.

“Sun is the voice of the hard question, SUN is the voice of the issue of everyday people living in the communities, SUN is the advocate for people and neighborhoods,” Owens said. “Whether it’s government, whether it’s policy, whether it’s infrastructure … people that are up and running SUN, they have never shied away from the tough questions. And now is the time to not get tired, now is the time for the second wind.”

Owens worked alongside SUN when she was Syracuse’s Deputy Commissioner for the Department of Neighborhood and Business Development. She recalled one example of how SUN helped people who were unable to pay their water bills. She said SUN alerted the people that if they were willing to schedule a hearing with her board, she would help to ensure their water was kept running.

Monthly SUN meetings begin with chair members asking the community to bring any crime or suspicious behavior to the attention of the police. SUN has an agreement with Capt. Lynette DelFavero of the Syracuse Police Department that a member of the department will attend each meeting to hear complaints, take notes and, subsequently, investigate.

At a recent meeting, concerns circulated around a fatal hit-and-run involving a motorbike and a cyclist. Maria Johnson, co-chair of the SUN board, fervidly voiced her personal concern about aggressive speeds down her street. Others agree, and an energetic — yet civil — back-and-forth discussion ensued. Eventually, Puchalski brought the group back to focus.

This is how the meeting continued. The group moved through the agenda addressing crime, then membership dues, then flood insurance, then Syracuse ReZone and so on. All in attendance were given a chance to speak, and made thorough and well-constructed points. Johnson believes this is because everyone who attends are proud to call the city of Syracuse home and want to fight to better the area.

“I have lived in this neighborhood for 54 years, but my family doesn’t want to visit because I live on the South Side, and my friends act like I’m a pariah or something because I don’t live in the suburbs,” Johnson said.

“But I like it here, and we just need to take care of it,” she continued. “You like your house, you clean your house. The same thing goes for the neighborhood. It’s just our outdoor house. We are responsible for this place. We just need to be a voice and pressure those in charge. In numbers you get strength. If we complain together, they will listen.”

Tickets are $100 per person; to reserve visit here