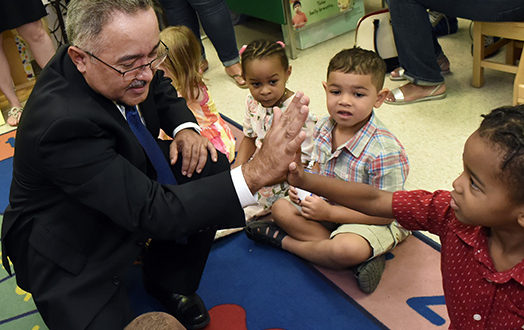 In the past three years, the Syracuse City School District has added three new schools, a districtwide
discipline overhaul and, most recently, a graduation rate that has exceeded 60 percent — a rate not seen in almost nine years. While some would see these as areas of success, superintendent Jaime Alicea, who took over the position in March, sees these only as stepping stones for greater district growth and improvement.

“I have worked in the Syracuse City School District for my entire career, and I believe in our students, our families and our staff,” Alicea said. “I believe that if we all work together that we can really turn this district around and start to see some really great improvements.” 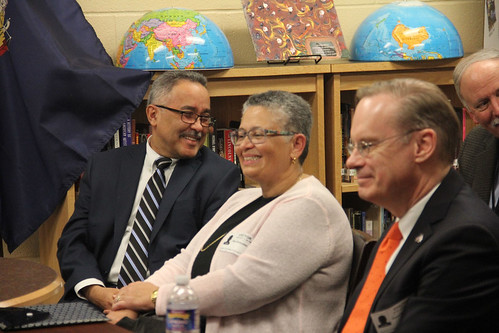 Alicea has spent the past 34 years dedicated to improving schools and advocating for the children of the Syracuse district, he said. During this time, he worked with students as a teacher, a principal and chief operations officer. After the departure of former Superintendent Sharon Contreras last summer, he served as interim superintendent. Because of his work as an advocate and a leader in the classroom, Alicea was recognized by Syracuse University Chancellor Kent Syverud with the Chancellor’s Citation for Public Education in 2015 as well as numerous other diversity achievement awards, including an upcoming Mary McLeod Bethune Educator Award from the Syracuse/Onondaga County National Association for the Advancement of Colored People (NAACP).

Alicea received a unanimous vote for installation by the Board of Education following success in his short-term goal of boosting literacy rates. During his seven months as interim superintendent, Alicea worked to hire more teachers to work with students, said Board of Education member Rita Paniagua.

“All of us are very focused on the timeline of the children coming to the district,” Paniagua said. “In third grade, we have goals of reading to learn, not learning to read, and he really pushed this idea.”

However Alicea’s role as an educator extends far outside his job. On his first official day in office, Alicea hosted a luncheon at Le Moyne College to honor city educators.

“Our future in this city and school district is our students and families,” Alicea said. “I am working to establish a positive, respectful districtwide culture.”

Alicea has always been heavily involved with school affairs, attending as many sporting events, parent-teacher meetings and community forums as possible. Because he has a hands-on approach to leadership, one of Alicea’s strengths as superintendent is his desire for communication and transparency, according to Board of Education member Katherine Sojewicz.

“He wants to hear what everyone has to say,” Sojewicz said. “Jaime has the respect of the community because of his commitment and relationships he has built throughout the city during his career. We appreciate that as a board and have seen a dramatic increase in morale and engagement from our staff and community as a whole.”

Moving forward, Alicea will continue to work closely with the seven Syracuse School District Board of Education members to improve graduation rates and reduce dropout rates, Sojewicz said. Together, they have plans to continue the drone technology program that educates students about construction and regulation of drones in engineering and manufacturing careers, expand the successful career and technical education programs existing in all five high schools and host more frequent community forums. The district is also finishing up its five-year plan, focused on building a better district culture, hiring and retaining effective teachers and providing better access to instructional materials.

In the 2015-2016 school year, the district had an enrollment of more than 19,000 students, with the number increasing this past year because of an influx of refugee students from seven Muslim countries.

“I’m excited to work with him because he listens, he’s tough,” Paniagua said. “And that right there is half the battle — when you’re inclusive of people, you get the job done.”