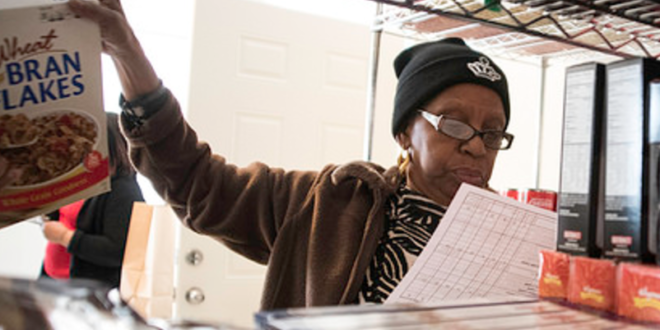 When the P.E.A.C.E. Inc, South Side Family Resource Center opened its new food pantry a month ago, emphasizing nutritious food, the longtime South Side institution drew one of its biggest crowds ever.

Located on Dr. Martin Luther King West, the resource center has been a safe haven for many local residents by providing small donations of food and clothing. However, when Charles Rivers took over as the center’s coordinator last year, he realized that the resource center could be more ambitious and do more to help the community. Rivers made it a goal to reach out to local residents in need. 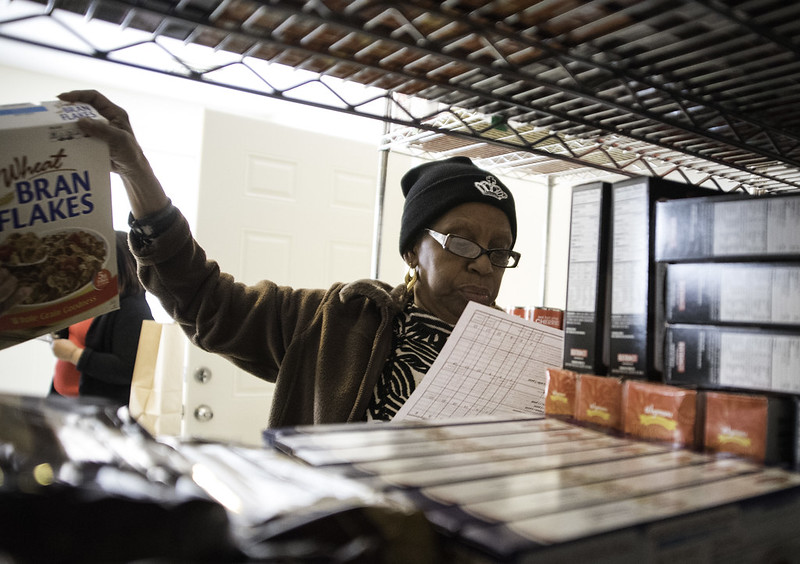 Cheryl Stevens removes a box of cereal from one of the many pantry shelves in the P.E.A.C.E., Inc. South Side Family Resource Center. She is filling a grocery order for a client. | Perry Aston, Staff Photo

“I had lived in the South Side of Syracuse my whole life, and I realized one of the things we didn’t have in this community was just the basic needs like food, clothing and such,” Rivers said. 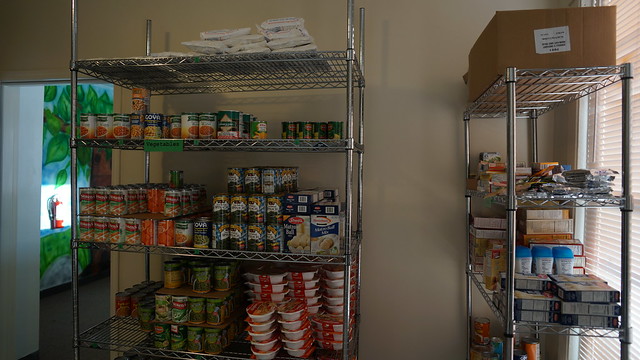 “That’s why we’ve been spending time here giving away clothing and food that has been donated. And then I noticed that we have working people who still cannot make ends meet and have to make the decision to either pay their National Grid bill or (buy) something to eat,” he added. “And I realized this person works, but they still have to struggle with that.”

Rivers said he was referring to the “working poor” — people who have a job and a family to take care of, but still lack basic resources, such as food and clothing. This was the primary reason he set regular hours for the food pantry from 2:30 to 6 p.m. every Thursday.

“The reason we chose our hours is to address the working poor. So, because they maybe get out of work at 3 or 4 o’clock, they would not go to your traditional pantry because they’re closed,” Rivers said. “So we had the option to do it on a Saturday or on a weekday, and after sitting down and really thinking about it, we came to the conclusion that it would be best if we serve it one day, but with inclusive hours.”

Darlene Jones, a South Side resident, has been a volunteer at the center since last April, and she works with two other volunteers whose responsibilities include taking people’s orders, organizing food items and restocking shelves. She said she believes that the healthy food options will benefit the community most.

“I think the way we do it here is food for the right diet. Here we have tuna, noodles, vegetables versus giving our children snacks and stuff like that,” Jones said. “If a person isn’t eating right, they’re not thinking right.” 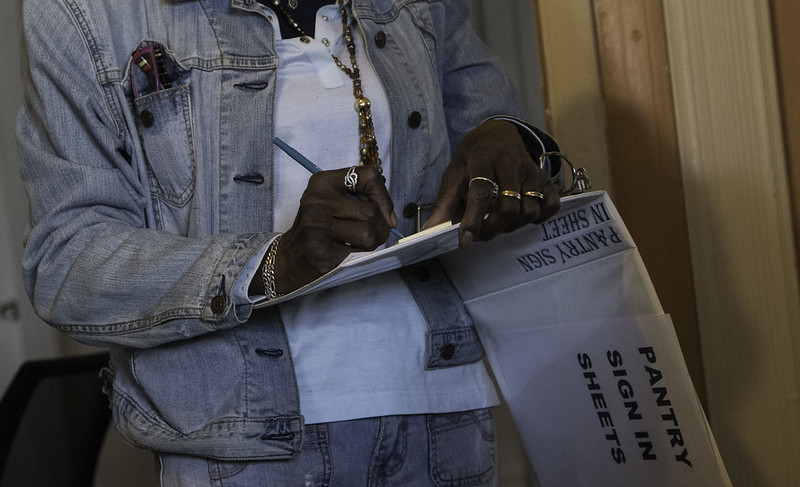 Ladeena Curry, who is a family advocate at the resource center, has lived on the South Side her whole life. She said she has seen the communal need for basic resources as an issue that has not been attended to, and she attributes that to a lack of members in the community who can offer help.

“The other important part of serving healthy food is having people that actually care behind it,” Curry said. “As long as you have the right people behind what we’re doing, it’s going to continue to benefit the community.”

Local community members found out about the pantry opening by word of mouth or the internet, and that led to an unexpected rush of about 20 families within the first hour the pantry opened. 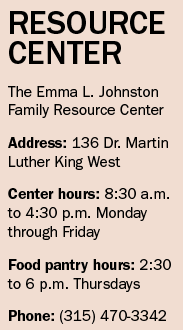 Renee Moore, a Syracuse resident with several grandchildren, recently moved out of the neighborhood but was still able to make her way to the center for the opening of the food pantry. Moore said she regarded the food pantry as the best place to receive enough food to sustain a family for a few days and establish a healthy, nutritious lifestyle for young children.

“You know here you got choices. They ask you what you want and you can take enough to feed your family for a certain number of days,” Moore said. “This is helpful especially for older people and children.”

Since becoming the coordinator of the center, Rivers’ mission remains the same. As a South Side resident his entire life, Rivers said he sees helping the community as his duty, regardless of his occupation. Help can mean serving food, handing out clothing or even assisting community members with finding a job, he said.

“Since I got here, we’ve been offering daily nutritious things like fresh produce or bread that has been donated to us from grocery stores or other donors. So it’s very important that you have nutritious eating versus just eating,” Rivers said.

“Eating nutritiously lowers the chances of obesity, diabetes and things like that, which are big issues in the community,” he added. “Those are some of the things we’re actually looking to address as well. Ensuring that community members have healthy food options on a daily basis.” 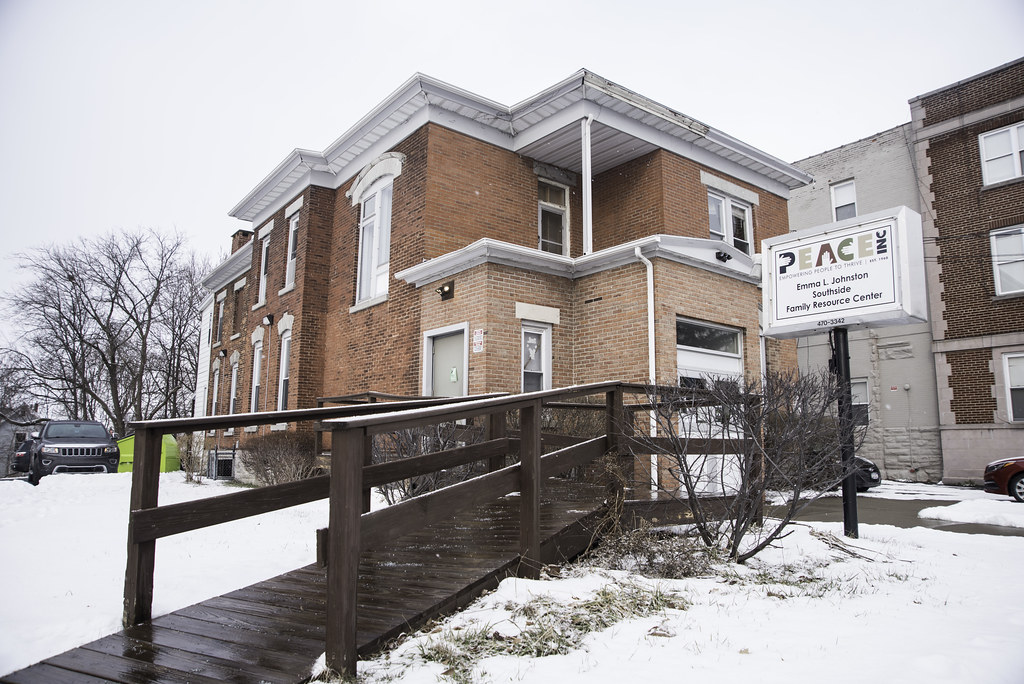