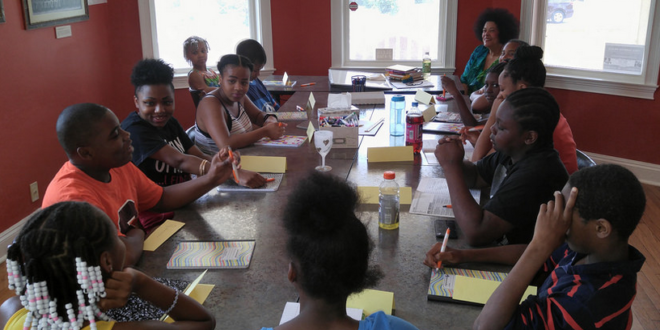 ‘They Call Me Mom’

The South Side Communication Center is much more than a safe place for middle-school and high-school students to gather after the school day ends. The center — which opened in January 2011 through a partnership with the Southside Community Coalition, South Side Initiative Office of Syracuse University and Home HeadQuarters — offers computer access, tutoring support, mentoring and positive reinforcement.

Rachielle Scrivens, site coordinator, runs the center as she would her own home — reminding students of projects due, to treat people with respect, and requiring them to start over if they’ve interrupted someone without first saying, “Excuse me.”

“They may be taking care of themselves as well as their siblings at home. Our goal is to give them a sense of direction on where they want to go and put them on a path to move toward that goal.” 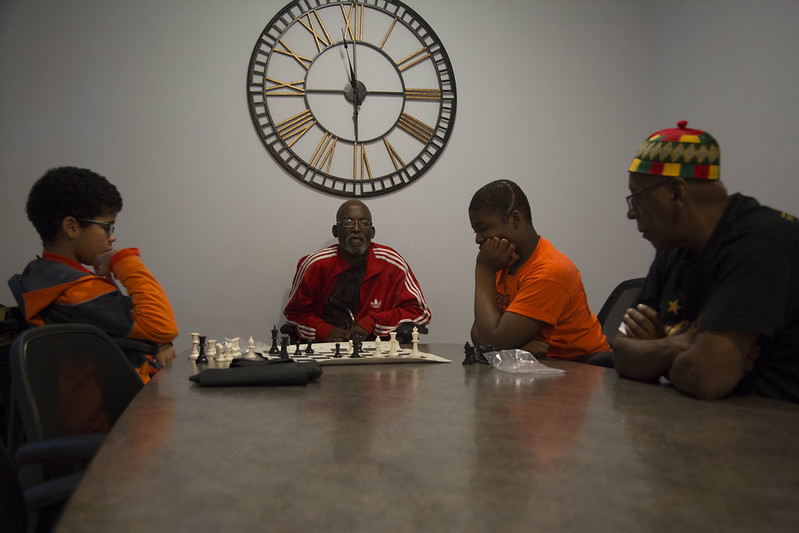 Jamal and Nyshaun are coached by Al Freedman and Charlie Perice-El at their weekly chess club meeting. The club just began this year and will hopefully help the kids in the South Side Communication Center think carefully and critically about all of their actions. | Dominique Hildebrand, Staff Photo

Scrivens says she teaches the students that they don’t have to be a victim of their circumstances.

“They only hear what they can’t do. They need to hear that they can succeed in life,” she said.

“We are here to support and encourage them. We look at the individual student and determine what their barriers are,” Scrivens said. “We act as a liaison between students and teachers, or parents and students, to make sure they are getting what they need. We want them to know that there is someone in their life that cares about them.”

The students have taken cooking classes, learned cursive writing and even how to play chess. They also participate in the “Economy Game of Life,” which teaches them about practical life skills they will need in the future.

“We have them look up the salary of different jobs and how they would pay their bills on the income of that job,” Scrivens said. “Can they afford to buy a house? A car? Do they have enough money to get their nails done? They are surprised at the outcome and have more under-standing of the choices their parents make.”

General Educational Development (GED) and job preparation, English as a second language (ESL) services, drug prevention, and leadership training are just a few of the programs that take place at the center due to the newly opened satellite location of Liberty Partnership Program (LPP), which is run through SU’s School of Education. The program served 279 students in grades 6 through 12 last year. Students in the LPP program had a 91.8 percent graduation rate. 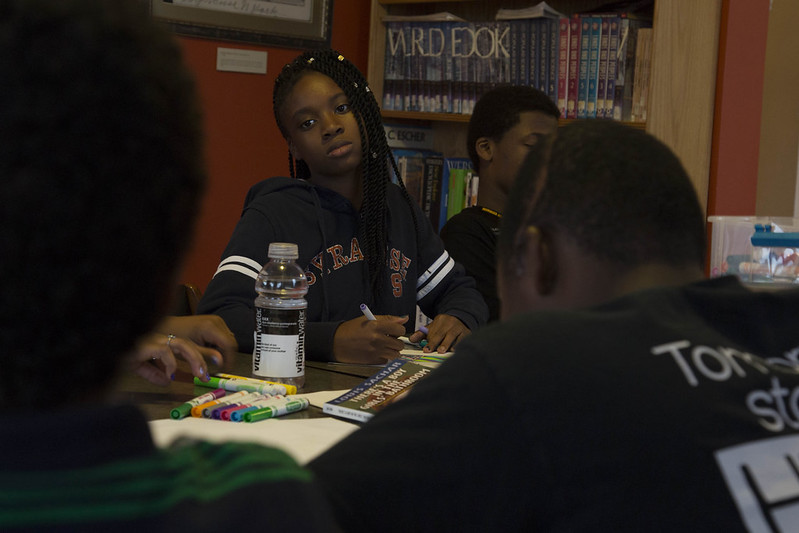 Nadia Joe flashes the boys a death glare. They have been picking on her all night. Ms. Rachielle only interferes when necessary. She typically lets the kids work through minor disagreements on their own. | Dominique Hildebrand, Staff Photo

“When we had an opportunity to open a satellite office at the South Side Communication Center, we knew it would be a great fit,” said Chandice Haste-Jackson, Ph.D., director of LPP. The site is especially beneficial because many students don’t have transportation to campus for evening and weekend programs. Additional services offered through LPP are a result of a survey sent to parents.

“We asked the parents what they needed. Now we are offering “Parent Power” — a program that offers engagement, advocacy and support for parents/caregivers,” Haste-Jackson said.

During the school year, academic programs are the priority, but in summer, the staff can focus on enrichment programs such as self-esteem, poetry, team building and outdoor recreation.

One of the summer programs offered at the center was learning how to sew. The first instructor quit after two weeks, but Scrivens says she was fortunate that an SU student, Maisa Young, came to her door one day to drop off some donations.

“When I told her our sewing instructor quit, she offered to teach the students herself, and she’s been here ever since,” Scrivens said.

The students learned more than the mechanics of sewing. They learned patience and perseverance that resulted in a feeling of accomplishment.

“They thought they couldn’t do it. They couldn’t thread a needle and didn’t know how to run the machine,” Scrivens said. “At the end, the majority of them successfully completed their project.”

Ronnaeyshia Goodwin, an 11th-grader at Nottingham High School, was eager to sew. After watching “Project Runway” on television, she wanted to learn to make her own clothes.

“My aunt makes her own clothes, and I wanted to learn the process. When I completed the skirt, I knew it was something I could do,” she said.

As a result of making a complete outfit, Goodwin was the winner of the sewing contest and received a new sewing machine. Now she’s making hair bows and bow ties for her friends.

Goodwin’s goal is to obtain a business license and open her own shop — a combination of cosmetology services and fashion design.

Like Scrivens, Haste-Jackson said the students experience a family atmosphere at the center. “They have somewhere to go after school that is safe and feels like home,” she said. “There’s a sense of belonging.”